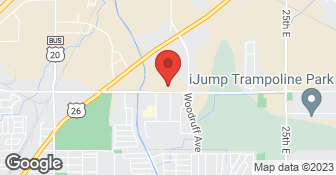 We are a Home Specialty Department providing quality service since 1965 with locations in Pocatello, Twin Falls as well as Idaho Falls....

We have the experience and dedication to get the job done right! Specializing in Roofing services, we guarantee your satisfaction, and we won't leave until the job is done right. We pride ourselves on the quality work we provide, while delivering great customer service! Call or click for your FREE estimate today!  …

Quality Begins at Home. We are the premiere home improvement company, with service and products that will keep you happy for years to come. Our customers receive unmatched warranties and exclusive products. We offer exclusive roofing, siding and window systems that are manufactured in America and installed by factory-trained installers, delivering the best possible result every time. DaBella Baths is our exclusive bath division, specializing in tub and shower conversions, bathtub replacement, walk-in showers and walk-in tubs. If you want to work with a contractor who is passionate about service, committed to quality and determined to delight you, then DaBella is for you! We’re ready to turn your dreams into a beautiful reality.  …

Description of Work
I ordered a new water softener and the install and subsequent warranty repair couldn't have been more positive from Sales to Service.

Description of Work
fix a vacuum cleaner for me.

Description of Work
They checked out two older sewing machines. They were honest regarding they machines. One was on it's last leg and I should not put any more money into it. I will use it until it dies. The other was serviced and works great. Very nice people.

I have an older water softener and had difficulty finding anyone willing to work on it. When I called Brady's they also said it was not a brand that they service. However, when I told them that I was having a hard time finding anyone to help me, they took my information and did some research. It took a week for them to get back to me, but when they did, they had found that the controller on my water softener was manufactured by a company that also produces controllers for water softeners that they do work on, and they had the parts in stock. They came out a few days later, on time, and had it fixed within about 20 minutes. They were polite, friendly, and professional. Their efforts saved me hundreds, if not thousands of dollars, on replacing my water softener. Thank you, Brady's!

Great left machine with Brady's was giving and date . Machine was returned in excellent shape

Horrible, horrible experience, absolutely the worst personal business dealing of my life. In all my heart I truly believe that Brad Brady deals dishonestly, he is nothing more than a snake oil salesman.

I’m sorry the member is unhappy but he has many things wrong. First thing is the Sunroom was $12,000.00 not $27,000.00 and I will show anybody who cares to see it his signed contract showing the price just so you know who is being honest. The first time the member ever talked to me about the siding was after he had another company fix the siding and it failed. I asked him why he had called another company and not notify me that there was an issue. He told me because they were there doing some other work. I sent my contractor out as soon as he had available time and he told me that the siding piece was ruined because so many screws were put in it that had torn out, that there wasn’t enough material to work with. We bought a piece of the exact same siding he had on his house but of course it wasn’t sun faded yet. The only way to make it match perfectly would have been to side the entire house and after a few months in the sun it matched perfectly. My service manager did bill the member for the work because he felt that the siding problem was caused by the work another company had done and not from the work we did. Because we at Brady’s have always gone above and beyond in our 47 years of providing fantastic customer service I called him and told him I would waive the charges because it was possible it was our issue and I will always fault on the customers side even if there is a question as to who caused the problem. I had not heard anything from the member since we fixed the siding until one of my employees’s told me someone came in while I was on vacation and complained about issues with a sunroom but he refused to leave his name and did not want to leave a service call. I can’t respond to some of the things the member states in his letter about the beam and posts as the guy’s that installed the Sunroom were killed in an auto accident in 2006. But I find it odd that he paid the balance due when it was finished if he had issues with it. If the siding came loose again I would be willing to come out personally and see if it is something we can fix or if we need to have someone else do it but the member refused to let me come out. Brad Brady Brady’s C.E.O.
5.0

As a quilter she puts a lot of wear and tear on her machines. We do not get charged often except for none covered items, but adjustments have been free. installation on the pool table was quick and professional

Description of Work
Brady's services my wife's sewing machines, we also bought a pool table from them

We can set up and deliver all our products as well as provide service.

We no longer do carpentry or siding.