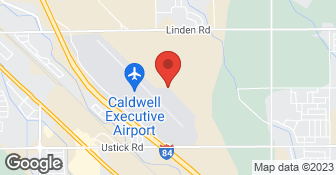 Arctic Air Express Heating & Cooling offers same day service for all you HVAC needs. We have been serving the ENTIRE Treasure Valley with quality service, knowledge, and materials for the last 14 years. All of our work is backed by our "iron clad" satisfaction guarantee. All work is quoted upfront and we charge by the job not by the hour!...

They came. My furnace had stopped working. They are really good. They are really nice. They got it done really fast. They were in the ballpark. They weren't any higher than anyone else. They come and check the furnace every year, and the furnace is now two year's old. They do free maintenance. I will use them to put my ac in next year. The furnace took two people. The work took two hours. It was clean. I didn't have to do nothing after them.

Description of Work
I used Arctic Air. He put in an new furnace. Installed an gas line, so I could put a gas stove in.

They did a great job. They've been in a couple of times to make sure that it runs. I didn't have them come out this summer because I had been traveling.

Description of Work
They do the tune-ups. They put it all in, they replaced the air conditioner itself.

They did a great job, they've been in a couple of times to make sure that it runs. It's nice now. The price I thought was a little high, but the quality was nice, we probably paid for the quality. It worked very nicely for us, they had a hard time scheduling and stuff at first, so probably a B for responsiveness. They were good, because we weren't able to be in the house the whole time they were replacing everything, they were good with that, it was nice for us. I like that they were explaining every stuff as they went, so there were no surprises, and when they discovered that we have spiders underneath the house, and the ducting have been destroyed by the first, which we didn't know that either, they were good about fixing it.

Description of Work
They did tune-ups, they put it all in, they replaced the air conditioner itself.

Superior Water & Air brings the same customer friendly service into the Boise area. Here we offer the best in plumbing and water services. Our customers will receive the quality service we have become known for over the years. Since 1956 we have gained the experience and knowledge to get the job done right. Whether you have a problem with the water heater, or your pipes are clogging up, call the experts.  …

Western Heating and Air Conditioning has served the residential heating and air conditioning needs of the Boise Valley since 1967- new construction, remodel, add on, and retrofit. Stop and see us any time. Plus Western is proud to be a Factory Authorized Dealer of quality Carrier products. Carrier - turn to the Experts  …

Bonded
Insured
All statements concerning insurance, licenses, and bonds are informational only, and are self-reported. Since insurance, licenses and bonds can expire and can be cancelled, homeowners should always check such information for themselves.To find more licensing information for your state, visit our Find Licensing Requirements page.
General Information
Free Estimates
No
Eco-Friendly Accreditations
No
Emergency Service
Yes
Warranties
Yes

Arctic Air, Inc is currently rated 5 overall out of 5.

No, Arctic Air, Inc does not offer free project estimates.

No, Arctic Air, Inc does not offer eco-friendly accreditations.