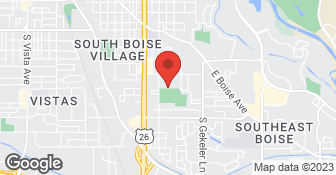 We do accept Credit Cards, but we have to charge 3%. We are a small outfit that likes to keep it simple, for that I personally keep a very close watch on QC! We will beat the competition on price and value!...

Five Star Painting of Boise is a value-added painting company dedicated to our customer's experience. It is our goal to provide our customers with the information and help in reaching their vision for their home and business painting projects.  …

On time, and if he needed to change times, he contacted us and kept us informed on the schedule, cost, breakdown, suggestions, email, text, called, amazing, and professional.

Description of Work
Recreated cabinet space in garage, created a pantry, access to attic, matched cabinets perfectly to the existing doors. Amazing, accurate, and above and beyond quality, I highly recommend Ryan, and we have hired him for another project beginning next month. We continue to Hire Ryan, HES AMAZING.... Always coming up with great ideas, and works well with modifications and new projects. HIGHLY recommend him, We will continue to use this contractor.

It took them one day to finish the job. Scheduling was a little bit of a challenge - by little bit I mean seven months. They were flexible in letting me choose the stain and trying to accommodate my schedule. The guy did one coat and it was hastily done and it's peeled up in several areas in the section he did, whereas the section that my ex-husband did, none of it peeled off. I left a message about that but didn't get a response. I liked Ryan but he wasn't the one who did the job.

Scheduling when it is summer time is a little bit crazy, sometimes it will take a little longer than expected but on this job we did a great job for what we had to deal with. There were three dogs and a whole lot to deal with. In this particular job it was a very hard area to work and should have been a complete tear down which I had told the homeowner but they did not approve. We are certified at all that we do and guarantee what we do!!! I do not like dirty people!
4.0

Worked efficiently and thorough. Cleaned up.

Description of Work
Give an estimate on garage shelving.

I purchased a Groupon for pressure washing and staining the deck. After a few days of juggling schedules, Ryan was able to come out and give me a bid for the work. The square footage was more than the Groupon covered, but instead of full-price for the remainder, he let me pay the difference in what the correct-sized Groupon would have been. We discussed the work by phone & email. I provided my own stain so it would match the other woodwork in the yard. One of his crew came and did the painting. Although the quality of what he did was good, it wasn't quite what I was expecting. The painter only did one coat on the top side of the deck boards. He didn't paint the sides/ends of the boards at the edge of the deck or any of the support posts for the deck. I had received other bids for the work and all of them included the sides/ends of the edge boards and exposed supports as part of the deck painting bid. Because my conversations with Ryan were by phone, I don't have documentation that edges & supports should have been included. Also, I specified that the deck stain said it required two coats (as has been my experience with it). He assured me it would be taken care of, but only one coat was applied. Again, my experience in coordinating service with Ryan was great. The actual painting work was well done, although incomplete in my opinion. A detailed, written agreement would likely avoid the same frustration.

Description of Work
Pressure wash and stain a deck elevated about 4 feet from the ground. The job did not include doing the stairs or deck railing because those were being replaced.

Ryan is one busy guy! And that's a good sign! Obviously he has a lot of business and as the old addage goes, "If you want a job done correctly, find a busy person." When I first contacted him he needed to get back to me to schedule a date and time that would work for him. After a few re-tries on my part we scheduled a three hour handyman job that consisted of painting a second story gable that was impossible to reach for my equipment. The second job was to install an exhaust fan in an under-the-house crawl space. Both jobs were done exceedingly well and well worth the charge. He was meticulous with the painting, using a brush instead of a roller and was exceptionally neat. Under the house required him to shimmy into a tight crawl space too tight for me to navigate and install an exhaust fan for drying out the crawl space. I had purchased a Groupon for $89 that would have been normally $229 and it would have been worth the complete charge! I highly recommend him and his work!

Description of Work
Handyman work: Painting a second story gable and installing an exhaust fan underneath the house in a crawl space too tight for the owner. Two hours of work that was accomplished with all of his materials.

Fabulous! I even had a leak in one of the ceiling exhaust fans while Ryan was building the shelves and in pouring rain, he scurried up the ladder, replaced a vent, and saved me from having to deal with another disaster! I will definitely use him again.........nice, polite, considerate and very professional!

Description of Work
I had requested some custom storage cabinets for my garage and putting together of some pre-made cabinets for a workbench. Ryan came out promptly, took measurements, and emailed me a plan and estimate based on what we had discussed. The cabinets are beautiful, built to my specifications and needs, and he cleaned up at the end of the day. The pre-made workbench cabinets certainly aren't the quality of the custom made cabinets but he assembled and installed them in record time. I had also hired him to make some shelves for a closet earlier which he did and even painted them to perfection!

Anything remodel, New construction, Custom cabinetry, Built in's for better use of space.