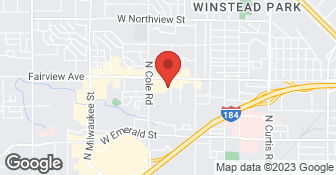 They worked with my schedule. They didn't cost that much. Very personable.

Description of Work
They moved my furniture out. They did send their repair man and they came in a very timely manner.

The move went extremely well. Houses and furniture were looked after extremely well despite moving some heavy and awkward furniture. Would definitely use this crew again.

Description of Work
They moved our heavy or larger furniture to our new house in Boise.

Thank you for the kind review, [Member Name Removed]. We are happy you had a good experience with us. We hope you are enjoying your new home. Don't hesitate to call if you never need anything!
5.0

Showed up on time, crew was polite, professional and efficient. Did a great job within the time quoted in the job bid. Will gladly use again for future jobs.

Very well with one exception. Scheduling was easy and allowed for weekend service. They did break (crack in 2 places) a dinning room chair. Person who did it was very transparent, explained what he did, and how the company will send a person out to repair and make it right. Even though they did break something they did pay to fix it (at house service). All in all, very happy

Description of Work
Moved our house (2 bedrooms, 1 tv room, 1 office, and garage) to another houes

The first time, they were terrific, getting the job done in just a few hours. No add on charges, no damage, very professional. This time in February 2017, I was very disappointed. First of all, this was the exact same move with the same amount of furniture and boxes to be moved. $220 the first time and $637 this time. The move took three times as long, therefore was much more costly, plus the added a trip charge of $25 for a 4 mile move. They damaged numerous pieces of furniture that had to be restored with gouges on the tops of tables and edge damage to several pieces. The company did arrange to repair them, but this damage should not have happened. One of the men was a joker and thought it was funny to carry two tables at once and balance a lamp on top. Yes, both tables were damaged. I will not be using this company a third time, that's for sure and I was incredulous at this second crew versus the first one.

Description of Work
This was the second time I used this moving company to move my two bedroom home to a new house 4 miles away.

We are very sorry to hear that there were concerns with the second move with us. The move in February of this year was for a 2400 square foot house moving from Boise to Meridian. When the customer called to book the job, it was estimated for 8+ hours of time. At this point the customer agreed with that estimate and never said anything about the same items being moved previously and that it only took a little over 2 hours that time. Had she told us that, it would have raised red flags since there is no way to move a 2400 square foot place in 2 hours. The second move ended up taking 6 1/4 hours of time plus there was a travel fee of $24.50 which we charge when we come back from a Meridian location. She is right that there was minor damage and that it was taken care of. We always repair, replace or compensate for anything damaged. Ms [Member Name Removed] is also right that the charge on the second job was for $637. She paid that amount at that time with no concerns being raised and she signed the invoice that she was satisfied with everything. If there is an issue and the customer voices any concerns at all about the time taken, or any other issue, we always resolve the issue at that time. We strive to have outstanding customer service and would be happy to speak with Ms [Member Name Removed] about any of these concerns.
5.0

This is the second time I’ve hired Cross Town Movers to move my furnishings from one house across town to another house. Even so, I did some comparison shopping beforehand, because this time I only needed to move the large items – I’d done the lion’s share myself, so there were no boxes, no appliances – just the furniture that wouldn’t fit into the back of my SUV – nothing else. I about swallowed my tongue when I saw the quote I got from the competition – you know, the ones who provide two men and a truck to do the work 😜. So I phoned Cross Town Movers who reminded me of their more realistic per-hour fee structure. The irony is, they also provided two men and a truck at a fair and reasonable rate that was a lot easier to swallow. I was impressed with the courteous, careful and efficient work of these two strong and hard-working young men, who came and left in their truck 😜. HIGHLY RECOMMENDED.

This is the second move I've done in the last few months with Cross Town and they've been great. No complaints and I couldn't be happier, great service!

It went well. We like them. They were good. I would recommend them.

Description of Work
We used Cross Town Movers for moving.

The guys showed up on time, and got to work immediately. We used them to move mainly large furniture, so they were able to load, move and unload within about two hours. We were very satisfied with their service. There was only one thing I was unhappy with; we were told there was no need for blankets, wrapping, etc., but our mattress was put in the truck with no protection, and when it arrived at our new house, it was marked and soiled on one side. We were able to remove most of the dirt, but it still has stains. The mattress is less than three years old, and has a white foam type cover. I highly recommend requesting a mattress bag/cover to prevent damage or soiling.

Description of Work
Moved large furnishings from one residence to a second residence approx. five miles away.

Great. Everything arrived in one piece and placed where I wanted it to be placed.

Out of state moves.

Cross Town Movers is currently rated 4.9 overall out of 5.

No, Cross Town Movers does not offer eco-friendly accreditations.

No, Cross Town Movers does not offer a senior discount.

Are there any services Cross Town Movers does not offer?

Out of state moves.