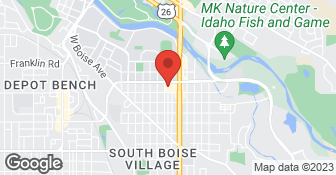 Axiom Home Inspections Idaho is properly certified, trust worthy and dependable. We perform to ASHI standards of practice. We often have the best prices in the Treasure Valley.  …

Sunrise Garage Doors sells only top quality residential and commercial garage doors and openers. We offer a wide variety of colors, material choices and window options to choose from. Whether you need to replace an existing door or are looking for a door for a new construction project, we have the products, skills and competitive pricing you are looking for. If you have an existing garage door that needs service, our highly-trained team of technicians provide fast, quality work.  …

We are grateful for Chris and his expertise. He is personable, skilled, respects our home, and the epitome of professionalism. I like to understand the work being done and he patiently explained what he was doing and why. His charges for labor and supplies was very reasonable. We would not hesitate to recommend him.

I called Chris expecting to not get a response, let alone an appointment for the work, for a couple days. I know that Chris is a pretty busy plumber. He called me back right away and I had an appointment for the work later that same day. Wow. The work required the dry wall to be cut into and removed. He cut clean holes, saving the drywall pieces to be replaced after the repair. His repair was very detailed oriented. He even worried about and took care of the interior of the adjacent wall. That is, the moisture that could cause mold.

Description of Work
Blown hose bibb due to freezing resulting from a connected, pressurized hose

Turned out to be harder than expected but Chris did a great job fishing the wires without tearing into the drywall.

Everything he worked on was cockeyed to start with. Had to wedge sink etc. Had issue with toilet installation too. But he made everything turn out perfect.

He was professional, punctual, and personable.

Description of Work
He put up plastic in the basement probably a year ago.

WAAAAY too expensive. Also, told us the tree was unwell and needed to be removed. The tree did fantastic this last summer. We had someone remove the dead branches and it looks great.

Description of Work
We did not have them do the work. They were "removal happy" and exceptionally expensive when compared to other companies we have used for similar size trees.

He did an excellent job. The cost and time it took was more than originally stated. Other than that, I was very happy with the job he did. I would certainly recommend him to anyone. He was very professional and left no signs that he has been in my home, other than the repaired floor.

Chris does a fantastic job. He double checks his work. If the previous toilet was not completely correct, he corrected defects before installing the new toilet. He was careful taking the old toilet out so it can be recycled. Minimal mess to the bathroom. New toilet is solid, works well, good pressure and looks good. I asked him to also look at the other toilet. the second toilet was not on the original estimate. He had the supplies in his car to fix the second toilet and graciously fixed it, too. Cost of parts was equal to what I would have paid at Lowes. Chris has never let me down. This is the third job he has donw for me. I am very happy with his professionalism and knowledge.

Description of Work
Chris removed an old toilet and installed my new toilet. Then he replaced the flapper and column in another toilet.

Both these jobs were complicated by the age and construction of the building. Long story short - Chris did a great job, worked conscientiously, and for a very fair price! I will certainly call him for most every kind of work around the house in the future. Pleased and thankful !

Description of Work
Repaired shower and installed new parts. Repaired drapery installation which was pulling off the wall in a VERY tricky location.

I had a very mysterious problem with my guest shower in that the water would only get luke warm. The water The hot water worked everywhere else in the home except for the shower. First of all, Chris was able to identify one possibility for problem by phone, which impressed me because it was such a strange thing. He was able to schedule me within a week and arrived promptly. When he looked at the situation he discovered that rather than the problem he had originally anticipated it was, it was only a matter of replacing a small part. Fortunately, it was not the other problem that would have required going through the wall, etc. I include this information because it is evidence that Chris is an honest, trustworthy, and highly competent craftsman who could have taken me for a ride, but did not. The job was also completed for less than $100.00. I feel this is a small price to pay for a nice hot shower for my family and guests. It is always comforting to know you have someone you can depend on to do an excellent job in the most cost effective way. I have future plans to upgrade my bathrooms and will certainly call on Chris for this project.

Description of Work
Chris fixed the hot water problem in my shower.