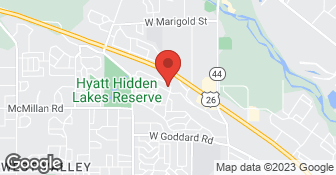 We have been in Remodeling Business for over 12 years working in King County Seattle Washington for companies such as Savvy Cabinetry By Design (http://savvycd.com/) and John Buchan (https://www.buchan.com/) We do Full House remodeling, Kitchens, Bathrooms, Room additions... Our crew consists of Brothers in Faith, We value our reputation as Clean and Professional Crew that doesn't take shortcuts in our work. We moved company to Idaho a place where Family Values are not undermined. We will be please to do business with you. Thank you  …

As a veteran-owned company, character means everything to us. Both my son and I served our country proudly and want to continue to serve our clients with the highest level of service and professionalism. We value your business and won’t leave you in the dark. Clear, professional, and responsible communication is at the heart of every project. And if anything does happen to change with the schedule, we will always make sure to keep you informed. Accurate Roofing Solutions is a family owned and operated roofing business that has been installing quality roofing systems with a skilled staff that brings over 22 years of experience to your project. With a reputation for "setting the standard" in roofing, we provide competitive residential and commercial roofing services to the greater Treasure Valley area. We exceed industry standards in QUALITY due to continuous training and technical updates in workmanship. Our labor warranties are some of the longest in the industry. Our specialty is complete re-roofing projects. Please give us a call at 208-425-7663 for all of your roofing needs.  …

One word description, NIGHTMARE. Could not trust or rely on Cafco. Project took 5 1/2 weeks. I made 58 calls to Cafco during this project trying to figure out where they were and what was happening when after time after time they would not show up after promising to do so. Finished project is a disaster. They talked us into replacing the sidewalk from the driveway to the house also because it was leaning towards the house. Now it is worse than ever, it's slopes towards the house three quarters of an inch over the width of the sidewalk as one photo illustrates. The driveway also has a huge dip or low spot in it where the grade wasn't held the way that it should have been, as seen in the photos also. Likewise, the original intent was to have the driveway slope away from our front yard but when the crew showed up to pour the slab for some reason they raised the form on the low side 2 inches higher so that now the water drains towards the lawn instead of away from it. The bed was not prepared properly as the pond in the photos show. The photos showing the pond was actually taken the morning of the day they poured.

Horrible. Could never rely on him or his crew to show up even after being promised on numerous occasions that they would "be here tomorrow morning." Portions of the job were done several times because they couldn't get it right the first time. This job took six weeks to complete. I would never, ever hire this guy to even put a mailbox holder into the ground. Don't even consider hireing him. You will regret it.

Was told 60 days and it took six months. Bill, the owner, does not keep his promises and tries to cut corners wherever possible. I would never recommend him to anyone.

Description of Work
Built a garage addition onto my home.

I am writing this as an update to my previous post - since completing this job last summer the wainscotting is now bulging away from the wall. I am not going to bother contacting this guy to come fix it since I don't want to deal with him again. He was rude and unprofessional, and I have no confidence that he will even fix the shoddy work. I would rather spend more money to hire another individual who will do the work correctly.

He was late for initial appraisal and throughout the project. Was given specific instructions on type of material that we wanted. When it came time to do the job he substituted for another material. We didn't realize this until it was already up, but it didn't look bad so after talking with Bill and he said that he would adjust the price accordingly we decided to keep it. He chose to use the mdf product from Home Depot rather than a real wood product we requested for the wainscotting. The paneling guy did a decent job, but on one piece of crown molding he spliced it and tried to merge two pieces together - it looked awful. Had I not brought it to Bill's attention it would have been the finished product. Bill agreed to get it fixed - which he did. The biggest problem with Bill is he didn't have any clue where his guys were and when they'd be back to work on our job. He would tell us they would be there later in the day or tomorrow and then no one would show up. Bill would be defensive and argumentative when I would call and ask where the contractors were and told me I didn't need to keep calling him. I told him I'd never had a contractor make a substitution of product without first consulting me. In the end, Bill refused to adjust the price of the material stating the cost was the same. I find this hard to believe that mdf would be as expensive as wood. My mistake was that I didn't have the contract specifically state what material was to be used so I just paid the bill because I was just done dealing with this guy. We are living with the finished work, which to be honest came out looking okay - it's still not what we wanted but it'll do - but after getting yelled at and called names by this guy I would never recommend him to anyone. The most unprofessional contractor I've ever used, and in my personal experience a dishonest contractor because the quote he provided me he said was for the wood paneling we requested.

Description of Work
Paneling and crown molding in our home office

He completed the work in one day. He was $3000 cheaper than a competitor I received a quote from. His service is great and he always does above average work. He is also very responsive and comes out when I call. He is very professional and I have no complaints with his service.

Description of Work
He installed a new roof in the past and has done other work since.