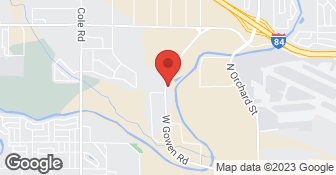 Affordable Rain Gutters is locally owned and operated and has been serving residential and commercial customers throughout Boise Idaho and the Treasure Valley area since 2000. Our Home office is located in Boise, Idaho. Our service areas include: Boise, Nampa, Caldwell, Meridian, Eagle, Kuna, Star, Middleton, Marsing, Melba, Homedale, Wilder, and Greenleaf. Affordable Rain Gutters is Licensed and Fully Insured. We hold contractor’s licenses for Idaho, Public Works License in Idaho, and a perfect record with the BBB. We are OSHA Approved and EPA Certified. We work hand in hand with Architects, Contractors, Project Managers, Residents, Property Managers, Condominium and Apartment Complexes and Roofing Companies. ► Rain Gutter Installation, Repairs, Cleaning, and Maintenance - Rain Water Harvesting 4 profiles from which to choose: Custom Seamless roll-formed 5” K style gutter, 6” K Style Gutter, Half-Round gutter & fascia gutter available in Aluminum, Steel or Copper. Our heavy-duty Hidden Hangers lend strength and a ‘clean’ look to your seamless gutter system. We strongly recommend leaf protection to home owners with homes surrounded by deciduous foliage; it’s patented design causes leaves and debris to glide to the ground instead of into your gutters, cost effective, durable and maintenance free - leaf protection will ensure that your gutter system remains effective for years to come....

Home remodeling NOW! We specialize in all your exterior remodeling needs! **AT THIS TIME WE ARE NOT TAKING REPAIRS DUE TO OUR CURRENT INSTALL VOLUME** Please give us a call to discuss your project! 1-800-346-9039 ROOFING Full Roofing Replacement: We proudly offer Asphalt Shingles- Owens Corning 50 years manufacture warranty. We do not install Metal roofing, no Tile roofing, no Cedar shake. WINDOWS Replacement windows with a 3 window minimum (Egress windows only in Boise ID) Lifetime warranty! Custom windows built for your home! ENTRY DOORS Entry doors only made by ProVia Amish craftsmanship. (front and back doors, French doors, sliding glass doors) We have awesome dog doors but for new install only. We cannot add them to an existing door. No interior doors. GUTTERS Full Steel/Aluminum seamless gutters and guards (guards can only go on 5k or 6k gutters that are in good shape) SIDING Siding: Composite, James Hardie, and vinyl with a 1 wall minimum (No Metal)  …

The estimator showed up on time and my estimate was very reasonable. The men that did the work also showed up on time (I did receive a call prior), were very nice and went above and beyond expectations. They checked leaks I complained about coming down on the patio from the metal awning and went up and seal the caulking for me. They also put my new rain barrel in place on pavers and installed the new drain into it, then showed me how to remove if I decided not to use the barrel. There was also damage to a drain from another worker which they smartly placed in another direction so the gate wouldn't keep smashing into the drain.(don't know why I didn't think of that). These men were really great and answered all of my questions. I would strongly recommend this company

But I need to call them back as there are still two small leaks.

RainOne of our rain gutters was leaking onto the outside wall of our house. We called Affordable Rain Gutters and the technician replaced the rain gutter that was leaking. He then told us that some other rain gutters had been improperly installed by the builder and that they would leak in the future. We agreed to change the placement of the other gutters in addition to the repair of the leaking gutter. A few weeks later we had a mild rain and the gutter that had been replaced leaked even more water onto the outdoor wall. I called the company and the owner was extremely rude and said that the leak was not their fault. He sent the technician back to check the replaced gutter and the guy pounded something. So far it has not rained since that time, so we do not know whether it was repaired or not. The technician seemed to be a professional, but the owners are extremely rude and unprofessional, and we would advise anyone who needs work done on their gutters to avoid using this company.

called me to say he was enroute to fix the leak. (James) I happened to be home so met him as he was inspecting the situation. He showed me that this was not part of their earlier job. I certainly recognize what a bad job the builder did with my gutter work. I had so many issues until last year when ARG came out, installed several gutters and repaired others. Even tho this was not part of that job, James did the repair at no cost. I absolutely tried to pay for the time and service but he insisted that I was not going to pay for something so minor and assured me that I would have no further problems with this area. I think so highly of this company. Two interactions, two very positive experiences.

Description of Work
came out to repair a leak I discovered during the winter months.

They showed up on time, did the work. I wish we had another estimate for the service to see if their price was the best. They left a few things on the grass, so I marked them down on quality. But really I have no complaints. They were in and out quickly.

Description of Work
replaced some broken gutters and repaired some that were pulling away from the house.

Tim (owner) came out to bid the job on Wed. Sept 4, 2013. ~Nice guy! He said he was busy but could arrange to have the gutters installed by Friday. Late Friday afternoon a worker called and said the "scheduler" had him booked solid and he could not make it. He said all the material was loaded into his truck and that he would definitely be at my house first thing Monday morning. I received a call at 9am Monday from the installer stating he was doing inventory and could not make it until the afternoon. I called the office and spoke to James, the "scheduler." He is about the rudest person I have talked to in years. He told me that HE makes the schedule, and the installer will be here when HE tells him to be! Evidently James scheduled an 8:30 job for the installer; they lied about doing "inventory." He got in my face (ear, in this case), about how these jobs go. I told him I took the day off work so that I could be here for them. He said "what did you do that for? -99% of the people don't do that!" This was all in a condescending tone with him trying to put me in my place; ME~ the customer, they guy that wants to give him money! I cancelled the job! This guy is very, very, very rude and very unprofessional. I have read similar comments on other sites about this company. I thought at first, everyone is entitled to a bad day; this seems to be the norm for this company. Use extreme caution when dealing this individual. He appears to be a time bomb! UPDATE: Evidently Tim (owner) was out of town when this occurred. Tim called me this morning to apologize for James' actions. He did offer to come out and personally do the job if I had a problem finding another company.

Description of Work
The only thing they DID do was give excuses why they couldn't show up!

I would like to extend an apology to [member name removed].. The issue with the scheduler is handled, I would like to explain the rain gutter business... it is very seasonal, most customers wait until last minute and don't understand what it takes to keep man power while there is very little work and the be overwhelmed in the busy times.. please try to under stand this and don't wait, get the work done in summer.... Tim
5.0

Went very well, showed up exactly when agreed and job cost was exactly per the quote.

Description of Work
Replaced chain that became too heavy for the application with a down spout. Job was somewhat complicated due to positioning of downspout to avoid being in contact with porch, so a slight jog was required, which was done in a very attractive manner. The 2 guys that did the work were awesome. Job took the better part of an hour and we are very happy and would recomment the company to anyone who needs gutter and downspout installation or modification.

They were fine. My experience with them was good. The quality of their work was fine. Their price was very competitive.

Cannot speak highly enough of the service provided by Affordable Rain Cutter Co. Even though the work I needed to be done was not a large job, I was treated professionally and courteously. I called Affordable Rain Gutter on June 9th and they scheduled to come out the next day. Performed the work even though I was not at home, and billed me the following week. Such trust from a company was such a surprise! Would recommend this company without reservation.

job was completed on time, in approx 3 hours. everything was left clean, questions answered.

Description of Work
I realized during a rain storm that I did not have full gutter protection for my home and was even seeing dry rot. evidently, builders no longer put rain gutters everywhere, leaving that to the homeowner. yikes. I checked AL, called this company. I got an inspection and price that very day. my work was completed on the 20th, a week or so later. I had gutters repaired, new gutters added and everything cleaned and inspected. the young men who did the work were wonderful. The company was a pleasure to work with and understood my financial issues, being retired, in a new home, on a fixed income. they were very flexible with my payments. I have already told several people about the good work and given them an endorsement.