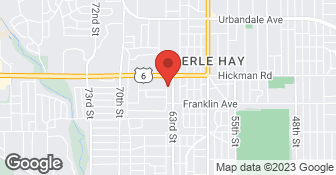 We are a company with five workers. We do not charge a trip charge and we do not mark up materials. All our work is guaranteed. We have over 60 years of combined experience and can handle a wide range of projects. We are located in the Des Moines area. We stand behind our work. Our policy is we're not happy until you are. We have been in business for over twenty years. We are listed in the Dex Yellow Pages and the Register Service Directory. We have been in both these publications for over seven years

Called and left messages, got 2 calls back saying the Electrician would be contacting me. Received a call from supervisor (I think) saying the electrician would call and set up an appointment for the next Thursday. (about a week out). The electrician called and said he was busy and and couldn't talk until next Monday but he would call. I have not heard anything from them for the past 2 weeks.

Description of Work
Owner would not return my calls or my home warranty companies calls. The first guy he sent out did not order parts, which was good because he didn't know what I needed. He was not a dryer repair man. Owner then hired his friend to come out then when I questioned why owner hadn't ordered my parts, he said his friend was unreliable. Took me over 3 weeks to get my dryer fixed. Not professional, not knowledgeable and will never use again.

Didn't have a good experience with these guys at all. Max seemed nice enough on the phone, but he tried sending me 2 different subcontractors to do our project and both were disasters. The first one (Raymond Murray) came out and looked at our project with us. We told him we were dealing with NFC Financing to get some renovation money up front. He seemed to think the project was do-able and said he would get us a quote in the next day or two. I called a few times throughout the next week and each time he said he'd send it right over. After about a week of not getting the quote, I called one last time and he said he didn't want the project because it was too much paperwork to deal with NFC. Something we told him about at the start. So, I called Max again. He apologized and actually fired Raymond (he said). Next he had Mason call us. Agreed to meet Mason on a Saturday morning. I had our real estate agent meet us at our property to let us in our soon-to-be house, and Mason never showed up. I left him a voice mail and a text message and he not only didn't show up, but to this day has never bothered to call back and apologize. Wasted a couple weeks on these guys, and needless to say I won't be calling them again.

A tree from one neighbors yard (behind me) fell across the corner of my back yard with the bulk of it landing in another neighbors yard (beside me). It damaged two fences bordering my property. I asked this provider to provide a quote on repairing and/or replacing the fences. It took several phone calls to get him scheduled to come to our house. He visited the house this morning but was unwilling to give me a quote insisting that the fences actually belong to my neighbors and therefore he has not been authorized to do work on their property. Apparently quoting the potential for work constitutes "doing work". He did say that he had asked their permission (verbally to one, left a note for another). I told him that was fine, I would make sure that he had permission before any work were to begin. I told him that I had taken on the responsibilities of getting quotes on the repairs and would coordinate with both neighbors since my property had issues with both fences. While his belief is that fences are my neighbors and not mine, I'm not sure the justification. They were built prior to any of us owning these houses, there has been no survey done and the city has confirmed that no permits were on file at the time the fences were built that we indicate which property owner built them. We, as neighbors, agreed to share the costs of fixing the fence since we all utilize them. He was unwilling to provide the estimate without personal authorization from the neighbors and while that is his choice, I found it unprofessional in this context. This is after multiple calls, each time having to reiterate the work I was requesting, to actually get to this point of having him (potentially) provide the quote. I told him that he didn't need to pursue it further with my neighbors as I would not be advocating the use of his company for this repair or future work.

Mason and Benjamin were very punctual. They worked quickly and efficiently, mulching and putting them in containers. There were a LOT of leaves. I would definitely hire them again.

Description of Work
Bagged leaves from front and back yard, left over from last fall.

Their solution to my problem was straightforward and well thought out. It was accomplished that day.

Description of Work
Altered a doorway to make it more handicap accessible.

It went well, some delays but otherwise well. Very responsible.

Description of Work
Replaced a bath fan and other misc handy work.

I have dealt with max on two different occasions on my rental property.

Description of Work
Work done on my rental

I called the company on June 25 to inquire about getting an estimate and was later contacted by Jason to set up an appointment. He came out to do an estimate and called back the next day with the information. I informed him that I would need to figure out when I could get some time away from work and would call him back to schedule a date to perform the work. On July 3 I spoke with Jason and arranged to have him come out on July 11 at 1:00 pm. After Jason did not show up on July 11, I called and left him a voice mail message. **Update as of 7-16-12: I was finally able to speak with Jason, and he informed me that he had to leave town unexpectedly for a family emergency. We have rescheduled for July 26. I will provide another update once this has been completed.

Description of Work
I contacted this company to do an estimate for replacing subfloor.

Description of Work
I needed a star hung on the outside of my home that was on a very high spot Bove the garage. I believe the gentleman that came out to hang was named Terry Burg. He was very professional and courteous. He completed the work and even went the extra mile and added silicone to the back of the star so it would not rub up against the siding. I was very pleased with the service. I would recommend this business and especially terry.

A nightmare from start to finish.

Description of Work
Billed for work that was not done, and billed for hours that were not documented.

The actual bill was $795. We returned twice to redo the work at the customer's request, but she continued to be dissatisfied. We have done over two thousand jobs over the years and are willing to do whatever it takes to correct any problems een if we lose money. We also guarantee our work for a year against defects in workmanship. We have many references of satisfied customers. Max Bridgewater (515)681-5110

Cover's Construction is an Iowa General Contractor specializing in Pole Barn Construction and Steel Roofing. I am proud of the superior materials we use, the efficient construction system we have developed, and of our teams who perform the work so professionally. Whether you need storage for machinery or housing for your animals, our buildings are designed to be durable, long lasting, and functional. If you are considering a new pole barn or new roofing for your building, I would appreciate an opportunity to prepare a proposal for you, and to furnish more details regarding our experience, versatility, materials and workmanship. Call me Monday through Saturday at 515-202-6351, or send me an e-mail . Thanks and visit our website www.coversconstruction.com Joe Cover  …

Bridgewater Handyman Service LLC is currently rated 3.9 overall out of 5.

No, Bridgewater Handyman Service LLC does not offer a senior discount.