A & M Windows Doors and More 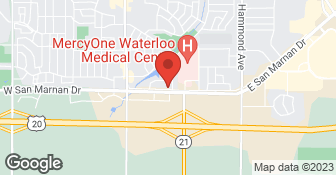 Our mission is simple; to provide products that are Top Rated by Consumer Reports and to provide the most energy efficient windows, doors, siding, and roofing available on the market today at a price anyone can afford. We are the exclusive dealer for INFINITY from Marvin Windows and Patio Doors in Northeast Iowa. Marvin has a rich history of craftsmanship, knowledge and dedication dating back to 1912. We are the exclusive dealer for Ultra Seal Maintenance-Free Vinyl Windows by Polaris Windows - Polaris was started in 1944 and Ultra Seal Vinyl Windows have the industry's lowest air infiltration - .01. A&M’s owner and installers are all master certified and trained in windows and doors. This allows our business to offer one of the best installation and service warranties in the State of Iowa - Lift-Time Installation and Service Warranty. In addition, to our "investment protection plan". Again, we offer products that are top-rated from Consumer Reports like Marvin Windows and Doors, INFINITY "Ultrex-Fiberglass" from Marvin Windows and Patio Doors, Heartland Siding Products, Mitten Siding, GAF & Certain-Teed Roofing Shingles, AZEK Decking. All of our products are made by companies based in the USA that have been in business for over 50 years. In addition, all of our products come with the industry's best owner protection policy — a non pro-rated, transferable plan, and most of our products offer a full lifetime warranty. We offer 0% APR financing from 6 months to 4 years. We offer GE and Wells Fargo financing and also offer Veridian Credit Union Financing as low as 3.25%. Read more about the A&M Windows Doors & More, INFINITY from Marvin Windows, Marvin Windows, and Soft-Lite Windows and Doors as well as our commitment to innovation at www.AandMWindows.com. Our phones are answered 24/7 - so please feel free to call us anytime at 1-877-640-1099 or Local at 319-232-1099

They were reasonably priced, they did a good job in the installation, and I am satisfied.

Description of Work
Mr. Kontos was supposed to install our windows in April 2013.

I had Mike come on or about 5 DEC 2012. I showed him exactly what we wanted to do. He took all measurements. Got back with us about 1 week later and went over all the details. Explained to him that it needed to be done by May 25th 2013, family coming in, daughter getting married and we wanted our house looking great. Said no problem. Long story short, no windows in May, June, July etc excuses excuses, weather, death of crew member family, meetings in MN etc, on and on. We paid 1/2 down to get the windows ordered. Well here it is December 2013, no windows. Said he cant do it, still behind, weather etc. The only good thing is WE DID GET OUR MONEY BACK PLUS 5 % INTEREST. Still missing a piece of window trim on the inside he took to make sure trim matched window, sills etc. Still havent got it back as of today. He would never keep a promise on returning phone calls. Would never answer his phone. Had a answereing service screen all his calls. He says he had his car broken into, and everything was stolen, computer, bill fold, cell phone etc. What ever!! . I even called his references that he had listed. They said he did good work. Biggest mistake I made I didnt get the start date in writing. I thought I had all my basis covered. I would NEVER RECOMEND THIS BUSINESS TO NO ONE!! But like I said, I lucky and DID GET MY MONEY BACK PLUS INTEREST. Thank you

Description of Work
quote windows for all of the house

Superior Pros, LLC. is a locally owned and operated Drywall/ Painting/ Siding/Windows & Doors contractor working to keep Iowa fresh and colorful. We serve residential and commercial clients with a commitment to consistently delivering the highest quality services at fair competitive prices. We only use the best tools and materials and employ the best the industry has to offer. Every member of our team has a proven track record of excellence and experience and knows how to utilize tried and true techniques to produce innovative styles and unparalleled quality. Painting is an art and your space is a canvas full of potential. We love helping our clients bring new life to the space that surrounds them.  …

Window Depot USA of Eastern Iowa has been in business since 2009, in 2010 Window Depot opened another office in Dubuque, IA. A Locally owned and operated family business, we make sure you are satisfied customers when your home project is completed.  …

Modern Edge Construction, LLC is committed to excellence in every aspect of our business. We uphold a standard of integrity bound by fairness, honesty and responsibility in all of our jobs. We are a locally owned and operated business with more than 10 years of experience serving Strawberry Point and surrounding areas. There is no job too big, or too small for our team. Call today and let us put our experience to work for you!  …

The Services and Products we offer include (Energy Star) Energy Efficient Windows and Doors. With the lowest air infiltration for windows in the State of Iowa. In addition, we offer any type of Windows and Doors (including any size or shape - Residential or Commercial) and including Front Doors and Patio Doors. We also offer Siding, Roofing, Decking, remodeling, and 4 Seasons Rooms. All of our products are made in the USA and Midwest.

We do not offer glass repair or screen repair

How is A & M Windows Doors and More overall rated?

A & M Windows Doors and More is currently rated 3.5 overall out of 5.

What days are A & M Windows Doors and More open?

A & M Windows Doors and More is open:

What payment options does A & M Windows Doors and More provide

Does A & M Windows Doors and More offer free estimates?

Does A & M Windows Doors and More offer eco-friendly accreditations?

Does A & M Windows Doors and More offer a senior discount?

No, A & M Windows Doors and More does not offer a senior discount.

Does A & M Windows Doors and More offer emergency services?

Are warranties offered by A & M Windows Doors and More?

What services does A & M Windows Doors and More offer?

A & M Windows Doors and More offers the following services: The Services and Products we offer include (Energy Star) Energy Efficient Windows and Doors. With the lowest air infiltration for windows in the State of Iowa. In addition, we offer any type of Windows and Doors (including any size or shape - Residential or Commercial) and including Front Doors and Patio Doors. We also offer Siding, Roofing, Decking, remodeling, and 4 Seasons Rooms. All of our products are made in the USA and Midwest.

Are there any services A & M Windows Doors and More does not offer?

We do not offer glass repair or screen repair