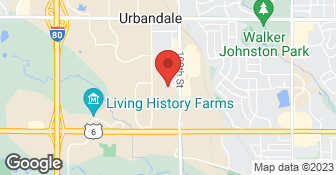 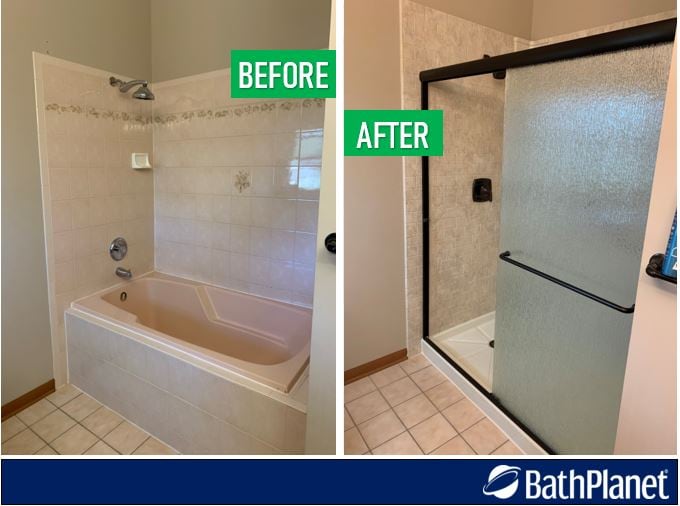 home remodeling
If you find yourself having less need for a bathtub and more desire for a sleek and stylish shower, it might be time to start planning a tub-to-shower conversion. While the idea of tearing out a tub and replacing it with a shower might seem overwhelming, Bath Planet of Des Moines can provide you with a quick and stress-free conversion. We offer various accessories such as acrylic shelving, benches, and grab bars for you to add as you wish. With our wide variety of designs, patterns, colors, and accessories to choose from, we can customize your new bathroom exactly to your liking!…
View project

Whether you're updating a small guest bath or a large master, a quality Iowa bathroom remodeling project can add value and functionality to your home. When you're searching for trusted bath renovation experts, look no further than the team at Bath Planet of Des Moines. Since 2001, we've built a reputation for excellence by providing top-rated acrylic products, professional installation, and exceptional customer care. Most importantly, our installation professionals have the ability to complete your bath remodel in just one day! Our fast, affordable updates make us the perfect choice for your next bathroom makeover!...

We had a walk in shower installed and they were professional, clean, and did an excellent job. Explained everything they did and gave us a sample so we could use it to buy new items for the shower.

Description of Work
Walk in shower

It was wonderful. The workers showed up on time and were very friendly. If they needed me to make a decision, they would explain it easily to avoid any confusion. They made sure to fit the shower specifically to my special needs. I was very impressed and very grateful as I have some limited mobility and they catered to them spectacularly.

They did a good job communicating with us, being on time, doing the job well and on time.

In home consult provided to us by salesman Ken Price resulted in our decision to proceed with the purchase of a new shower enclosure, and we were eagerly anticipating the install. We also had every confidence that our post install review would be a resounding five stars, echoing the five star pre install review we gave. That isn’t the case. **Positives - Shower looks terrific, thrilled with the performance and quality of it thus far. The install technician, Colton, is absolutely phenomenal. He takes extreme pride in his work, communicates effectively as situation warrants, and instills a sense of trust and comfort in his abilities almost immediately. That same communication, trust, and ability exhibited by Colton would be a solid five stars and more if the review could be based on only him. Despite some obstacles that surfaced shortly after the renovation process began, Colton assured us that he would deliver a beautiful product at the end, and he didn’t disappoint. The end result exceeded our high expectations that were based on the options presented and choices made during our consultation with Ken. Colton is a definite asset for this company and it’s product offerings and performance. **Another positive - Having several calls placed to me by Caitlin the following morning in regards to several errors made by Ken in payment info notations, as well as his failure to let us know that the pattern chosen wouldn’t align properly in one corner of the enclosure, with those being promptly resolved. Another call was placed to me by Caitlin two days later to schedule our installation, and all systems were a go. One day prior to install, I was easily able to reach Caitlin to confirm that install was still on schedule and when to expect the contractor. My husband and I were both very impressed with the level of communication and so appreciative of Caitlin’s attention to detail.**Negative - Less than an hour after the renovation began, there were already issues with what was shown on paper not able to be completed by the install contractor as indicated. Colton reached out to salesman Ken, whom promptly contacted me to discuss the discrepancy. The issue still remained, but with the renovation already underway and a wall removed, I told Ken that Colton could continue, that my husband would reach out to him soon to discuss things further. Call was made and msg left for Ken to please contact him back as soon as possible. A call was made to Caitlin concerning the issue, who told my husband that what was stated in the contract and signed for/agreed upon was what was being installed, and not her concern. When pointed out to her that nowhere in the contract was it written nor signed off on a there being a raw, unfinished area of flooring that would remain because the shower tray wasn’t of the size needed to do so, she again reiterated that what was ordered, received, and being installed was what was indicated in the contract and of no concern to neither she, nor to Bath Planet. No attempts were made to reach out again and address our concerns. Further calls to Ken requesting a call back, with zero response. No idea what was being done to remedy the incorrectness of things until two hours later when Colton came to give us an update. Many questions, and no ability to reach Ken or Caitlin. Colton was put in the middle of something he shouldn’t have been. Post install paperwork indicated our dissatisfaction, but no effort made to reach us. Two weeks later, still no contact made. Having lived many places worldwide as a military family of 30 years, we’ve seen many cases of both great and awful service. To receive the reprehensible service of Bath Planet that was exhibited by Ken and Caitlin in Iowa, where kindness and decency is paramount, is a shock. Word of mouth travels quickly for national companies like Bath Planet, even from regional branches. Beautiful product that we show to family and friends around the country, and tell them to go elsewhere for their needs instead of dealing with a deceitful company with no regard for customers.

They were good.They came when they say they would ,they got the job on that day and there's no mess left behind.

We end up happy with the results and it took a lot of days to make it work .The installer is knowledgeable and on time .

It was excellent, they were very creative in solving a couple of problems that arose during the installation and everything is working well. Their recommendations on which products to use and how to maintain them were very helpful.

Description of Work
They installed shower for me.

They were excellent and the shower is great and they did a nice job.They cleaned up everything when they were done.They were polite,nice and on time..

Description of Work
Remodeling Kitchen and Bathroom Walk in Shower

great everything was perfect and the work is nice