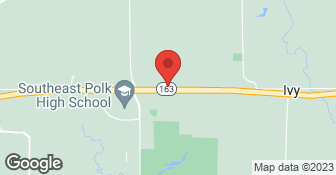 I contacted Joe in late June, shortly after I had my sewer line replaced. Since we were heading into the dead of summer when it's too hot and dry to try and establish a lawn, I was planning on having the work done in September, after the weather broke. (Who knew we'd have a relatively cool and wet summer?) Joe gave me a quickie estimate of the work, which was quite competitive with other estimates, and promised to contact me in September. Which he did. Big plus for Frontline, as I went through probably a dozen landscapers who either never responded to my inquiry, or never sent an estimate after visiting the site. I ended up going with another company that was more aggressive in courting my business, but I'm not overjoyed with the work that was done. I wish that I given Joe a call to get him out here for a firm estimate. I'm definitely going to give him first chance at any work in the future.

Description of Work
I contacted Joe about restoring the section of my front yard ripped up when I had my sewer line replaced, and replacing the landscaping in front of my house.

Having just moved into a new home and with many other big projects on my plate, I elected to hire the replacement of an eroded timber retaining wall behind my garage. The old wall was full of holes and the dirt from above it had washed down between the wall and garage, even heaping up against the siding, causing mold problems inside the garage. The job I proposed was Frontline to: 1. Remove the old wall made of railroad ties 2. Re-grade so the dirt was place back above the wall and so water would wash away from the foundation 3. Replace the wall using new treated timbers 4. Place river rock around east and north sides of the garage (including between the new wall and garage) I checked Frontline's credentials on Better Business Bureau and saw one issue within the past year, which had been resolved, so I found them to be reputable enough to talk to. The owner, Joe Morton, came out and looked at the project. He showed up on-time and was very engaged, listening intently to my goals for the project. He also offered several options how the grading could be done to get water away from the garage, which I found quite impressive since I hadn't thought of his options myself. Based upon his professionalism and engagement, I chose to hire him though his pricing was a bit more than others I had spoken with. Once I selected him, I asked when it could be done and he had a backlog of several weeks, which I was fine with. This turned into a month or longer, during which I didn't hear from him so I followed-up again. He said a few weeks more, so I waited quietly until coming home one evening to happily see the wall installed. I looked closely at the job and noticed the grading issues were worse than before. They had not graded the existing soil between the garage and wall and had actually piled the soil up the side of my garage approximately 12-14", so far that it was heaped along the metal siding to guarantee future mold problems inside. I contacted Mr. Morton explaining the grading issue and he had a crew out the next day to dig a 6" trench along the garage the way I had it before (which was a stop-gap measure I had done before until I could get a professional to completely re-grade the area). I then expressed to Mr. Morton that I appreciated his effort, but I needed him to properly grade area between the wall and the garage as he had recommended and then re-set the wall on the new grade. His reply (weeks later) was that the area back there couldn't be graded to achieve what I wanted, so he agreed to take $170 off my bill. The result is that Mr. Morton didn't acknowledge they had made a mistake and refused to do the job as we had agreed. Though he suggests the area can't be graded to achieve what I wish, his views were very different when we discussed the job at the beginning in great depth. To close the issue and move on, I accepted $170 off the bill, which certainly isn't a pleasing outcome for me. I'm disappointed that my options were ultimately narrowed down to A) go to court and attempt to have Frontline meet the terms of the job B) fix the issue myself.

Description of Work
Cashed my down payment check. (the day they received it) No other activity on providers part that I am aware of.

We strive to provide the best quality service for our clients. Lees Land Management provides a wide range of Serivices.  …

Baldwin Earth Creations - We have multiple years of dirt moving and grading experience. Continuously striving to provide the highest quality product that leaves our customers are more than satisfied!  …

How is Frontline Lawn and Landscapes overall rated?

Frontline Lawn and Landscapes is currently rated 2.1 overall out of 5.

What days are Frontline Lawn and Landscapes open?

Frontline Lawn and Landscapes is open:

What payment options does Frontline Lawn and Landscapes provide

No, Frontline Lawn and Landscapes does not offer eco-friendly accreditations.

Does Frontline Lawn and Landscapes offer a senior discount?

No, Frontline Lawn and Landscapes does not offer a senior discount.

Are warranties offered by Frontline Lawn and Landscapes?

What services does Frontline Lawn and Landscapes offer?