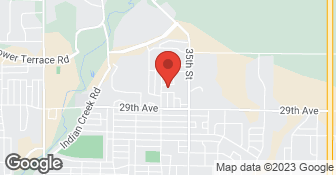 At Dan Lynch Construction we pride ourselves on being a small locally owned company with three local employees. Dan, the owner, will meet with you to discuss your project, provide a hand delivered estimate, and be present on the jobsite....

It took a couple of phone calls, but when the crew arrived they were on time and the clean up was complete. The job was pricey, but they did a very good job. I have a call in for more work to be done, so I hope Dan will get back to me quickly, as I had the bid done many months ago.

Description of Work
Hired for partial roof replacement and removal of pergola.

As of 4:10 pm Friday they still haven't shown up or called. I called and left a message at 12 noon also. NO CALL OR SHOW. NO RESPONSE PERIOD. If you expect someone to show up as promised go somewhere else.

Description of Work
I wanted an estimate to have a wall removed and hardwood floors installed. they called and set up an appointment for Friday 8/26/16 at 11:00 am.

Good guy. Seemed knowledageble, professional and above board. But VERY high bid.

Description of Work
Gave estimate on kitchen and bathroom remodels

Dan Lynch is very easy to talk and very responsive to requests. His workers were diligent, cleaned up after their work each day, and performed repairs that seemed to be impossible, but they were so meticulous that the repairs were perfect. We had two horrible repair areas at windows that had leaked for years. Time and time again we had people come in to find the leaks and fix them. None of them ever stopped the leaks, but Dan and his workers found the two leaks, which proved to be improper installation when we built the house. One leak was in a 14-foot span of windows, two stories high with 9 foot ceilings on both floors. The windows were surrounded and separated by very ornate wood trim that was painted white. Once the leak was "actually" repaired, the leak being the above the window where the wall met the soffit, the repairs began. 50% of all of the wood trim on that wall had cracks opened up in wet seams, creating highly visible destruction by the water. With the tiniest of tools, he very meticulously cleaned out all of the cracks, filled the spans of open breaks in the wood, painted the areas that were patched, That window also had serious and ugly water damage to the sills which were also repaired. When he finished this project, it was impossible to tell any water damage had ever taken place; it was like new!! The second very serious leak was in the large front window. This was another leak that numerous repair people told us they had patched . . . NOT!!!! Dan Lynches men found the leak, which was caused by a missing piece of the window on the floor above, which was how the builder of our home caused 9 years of leaking in the big window below!! Dan Lynch and his workers not only found the cause of the water damage, fixed the problem, and repaired the extensive water damage in the big window. Since the water had leaked in from the floor above, the wall paper had fallen way from the wall around the large window. The leak had created wood expansion and cracked paint on the window sill and on the mopboard at the floor below. The span of wallpaper between the the sill and floor had fallen away from the wall. At the top of the window was the worst damage that ran the entire length of the 10-foot window. In beginning his repairs the painter poked into the wallboard above the window to remove the damaged area. The wallboard came down and was so saturated that it had disintegrated into a soft, moldable clay!! He cleaned away the area above the window, installed a piece of new wallboard, about 9-feet by 5 inches, did all of the plaster and patch netting work and careful sanding. When that was pristine, he painted the area and when dry, he replaced the wallpaper. No one would ever know there had been a leak. The repairs that he did made were more art than a repair!!! There were numerous problems where simply painting over patched picture holes was not satisfactory because, although, I had all of the original paints, some had dried up. With my folders of house construction information, I had all of the paint numbers for the house. When he went to have fresh paint made for those dried up, he found that they had changed the base for all of the paints. The color was a perfect match to the walls, but looking at an angle, there was a different sheen to the original and new paint because of the base change to non-toxic. A few rooms he had to paint in entirety. He found that by a clever method of painting up to wall seams or deco wood, an area without a need for patching could be left unpainted by using corners, and other wall breaks as a method of making the paint job look perfect, without having to repaint the entire room. Over all of the years we worked with contractors for building additions or making repairs in 5 different homes, I never found anyone to compare to Dan Lynch and his crew!!! Besides the beautiful repairs, Dan was a very patient and responsive man. I would hire Dan Lynch again and highly recommend him to people needing help with their home.

Description of Work
Dan has an excellent team of workers who repaired several leaks from windows, one on the roof. They repaired all of the damage to the woodwork and ceiling. They repaired a problem with sunken pavers in the front walk. They repaired four wallpaper problems and reglued dozens of wallpaper edges in a torn-chunks style of wallpapering in one room. They removed all picture hooks throughout the house, then patched and painted. Some entire walls needed to be painted to look right. They repaired cracks in wall and ceiling, then painted three entire rooms that had cracks. Stripped, restained, and finished front door. Repaired leak in double doors and repaired water damage to oak flooring. Eliminated a leak at the foundation of the house. There were many other problems requiring repair and painting, for which Dan and his crew found solutions and performed perfect repairs.

Excellent service. Looks like it was always part of my home.

Description of Work
Added a third garage stall and replaced some cedar siding on home. Also painted where needed

I just signed a contract with him and so far I am very impressed with his professionalism. He had each of the people that will be doing work come out and look to see exactly what they had to do so they would be able to give me an accurate estimate of what it would cost. Another guy didn't do that. The price is a little high.

Description of Work
I got an estimate from Dan Lynch Construction.

Thank you for your review. We are pleased that you are happy with your project.
5.0

Our home is three stories high in places and we have several different roof lines - a difficult home to work on according to the contractors from whom we got estimates. Dan Lynch's estimate was the lowest of the three we received and we were pleased with the quality of the work. The siding was installed during record heat in the high 90's and the crew was here promptly from 8:00 to 5:00 five days a week, without complaint. Dan Lynch and all of his men were professional and polite. I highly recommend this company.

Thank you very much for this review. We really appreciate you taking the time to share your experience.

Modern Edge Construction, LLC is committed to excellence in every aspect of our business. We uphold a standard of integrity bound by fairness, honesty and responsibility in all of our jobs. We are a locally owned and operated business with more than 10 years of experience serving Strawberry Point and surrounding areas. There is no job too big, or too small for our team. Call today and let us put our experience to work for you!  …

We specialize in rough framing for homes, garages, decks, fences, and more! We guarantee your satisfaction and will provide the quality service your home deserves! Call -or- click to schedule a free estimate today!  …

Griffin Painting Pros is a family owned business. My husband and I have started this business the beginning of this year. My husband has had 20 plus years as a painter and I have had 2 years. We do interior/exterior painting. Staining of decks and/or painting. Repairing of holes in drywall and also texturing. We are fully insured and listen to what the customer wants and needs are. Please feel free to contact us with any questions you may have. We are hear to help beautify the home/business that you have worked so hard to own.  …

Dan Lynch Construction, Inc. is currently rated 4.7 overall out of 5.

No, Dan Lynch Construction, Inc. does not offer eco-friendly accreditations.

No, Dan Lynch Construction, Inc. does not offer a senior discount.

No, Dan Lynch Construction, Inc. does not offer warranties.