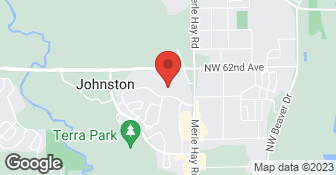 Specialist in cleaning all types of HVAC equipment and air duct systems. We have the experience and dedication to bring your dreams to reality! We guarantee your satisfaction, and we won’t leave until the job is done right. Call or click to schedule a free estimate today!  …

A little research both here and on the internet led me to Gilliam Power Vac Furnace Service. A brief phone call with owner Larry Gilliam sealed the deal. He explained the process, costs and time involved. It's a father and son team that's been working together for years. They're extremely thorough and obviously take great pride in what they do. They made a point of showing me the ducts before and after cleaning. Amazing! They look brand new. They also left their work areas spotless. I couldn't be more pleased with the work they did. True professionals in every way. I'm so happy to have found them. Need ducts cleaned? Call these guys.

Description of Work
Our ducts hadn't been cleaned since our house was built nearly 20 years ago. Ignorance and oversight on our part. Obviously they needed it bad.

I have a newly constructed house and the ducts (20 registers) were full of all kinds of stuff. These two (Father & Son) are fantastic. They have been doing this for many years and it shows. They are very professional. They came in got the job done and got out. No fooling around and they did not leave any sign that they were even here. I would hire them in a heartbeat.

They came out May of 2014. They gave us a quote, they came when they promised, they gathered them and wrapped it out. They are very professional.

Description of Work
We had our air ducts cleaned by Gilliam Power Vac Furnace Service.

We received timely return calls to voice messages. Was able to fit us into schedule within a week of our call to him. Called day ahead of job to confirm and arrived on time to do the work. Very efficient and good to work with.

Description of Work
Cleaned and sanitized all air ducts

Gilliam arrived promptly at 8 a.m. and went right to work opening up the ducts and removing the register covers. They do each section of duct separately (first vacuuming and then spraying with sanitizer and cleaning with cloths). The ducts looked like new when they were done and the house is fifty-five years old! They were thorough and did a fantastic job.

Description of Work
Gilliam arrived promptly at 8 a.m. and went right to work opening up the ducts and removing the register covers. They do each section of duct separately (first vacuuming and then spraying with sanitizer and cleaning with cloths). The ducts looked like new when they were done and the house is fifty-five years old! They were thorough and did a fantastic job

Our HVAC system was in serious need of cleaning after an extensive remodel. We went with Gilliam based on detail from their website and positive reviews here. It's a family business, and the father and son team are pretty booked up. They (lucky for me) had a time slot open up, and were able to work us in quickly. They arrived about 15 minutes early, had me walk them through the house identifying both vents and returns, and then got to work. They called me down after getting their primary hole cut to show the debris the contractors had left behind in the plenums. It was appalling to say the least - pop cans, huge chunks of drywall, and much more. Said it was one of the worst they'd seen in 24 years of service. Seven hours and about 25 pounds of debris later, we have clean ducts. Super nice and professional, they were very careful about floors, furniture, and cleaning up after themselves. They even managed to identify problems the HVAC installer had left (and which we have since had corrected.) For the amount of work they did, they were underpaid on our job. Pricing is a base rate plus a per duct charge, and an optional disinfectant charge if you choose to have them do that. I would highly recommend them.

Could not ask for more professional, respectful, friendly and efficient individuals. Arrived up on time, worked extremely hard and cleaned up. My newly purchased home is large with many registers, thus the higher cost. I would hired them again in a heartbeat.

Could not ask for more. Great guys to work with and I would recommend them to anyone. A+ in my book!

Description of Work
Larry and Frank were excellent to work with. To start off, they showed up on time which was 8:00 A.M. When I answered the door, Frank was very polite. I took Larry and Frank down to the basement to show them what I had, and they explained a few things to me and went right to work - no wasting time whatsoever. Right away Larry had the ends off my duct work and showed me the mess that I had while explaining what they were going to do. While they were there they worked like bee's - each knowing and doing there part without suggestion from the other. The first thing they did was clean out the return air ducts with air and a large vac ( Vac is outside so no mess inside) After they cleaned out the ducts with air and the vac, they even scrubbed them down with cleaner and water - this is the little extra that puts them above and beyond others. Larry and I talked about this and referred to this as to using a broom on your floor - that only gets them so clean, but it is the scrubbing that finalizes the job. After the return air ducts, they moved on to all the branches that go out to each room - cleaning them with air nozzles and vibration. Another step which impressed me is that they cleaned the air conditioner coils and the furnace and explained to me that if only the ducts are cleaned, that is only half the job. When the job was complete, they cleaned up and you couldn't even tell anyone had been there. This is a great family team and I would recommend them to anyone.

It went very well. I am very happy.

Description of Work
They cleaned our vents completely, sucking out all the muck—and, oddly, toys—that had built up over the years. The air in our house now feels different. And the father/son team were not only professional, but extremely personable.

They worked in a timely manner, they were on the job at 8am like they said they would and I would recommend them for any work you have to have done.

Description of Work
This company cleaned all vents in a large house.