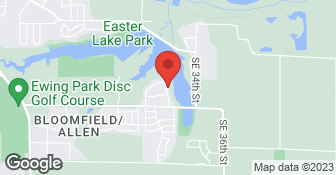 We have offered Quality Tree Service for Over 15 years and would love to take care of all your trees needs. We provide Tree Trimming, Tree Removal, Stump Grinding, Tree Treatments and Debris Hauling. So please contact Jake or Eric for all your Trees Needs.  …

We offer quality and affordable tree service. Give us a call to schedule your free estimate.  …

Arbor Way All About Trees LLC

Arbor Way All About Trees LLC is your tree care experts. We thrive to make you our customers happy! There is no tree too big or small for our experienced climbers. Our ground crew will awe you with their exceptional hard work along with their clean up! * please note our climbers are a show to watch! No machine necessary for them to climb and they climb SPIKELESS!!  …

I don't have the specific dates but I believe my husband requested an estimate from Tyler McAningh with Tree Needs around the beginning of October. Tyler came out the next day and provided an estimate for cutting down the tree, close to the ground, and hauling away all debris and he also provided an estimate for grinding the stump, seeding the area, and hauling all debris. We also checked with three other tree services and found Tyler's estimate to be the most cost effective. We didn't need the tree removed right away but wanted to have it removed soon. My husband contacted Tyler to schedule a date to remove the tree and Tyler thought he would be able to remove the tree the next week however he didn't remove the tree and we didn't hear from him that week. My husband called Tyler and he said he was busier than usual and should be able to remove the tree following week. Another week passed and still no show or phone call. My husband had given Tyler his work phone number and Tyler did try to call but my husband was out of the office when he called. My husband called Tyler again and he said should be able to remove the tree the early part of the next week. I believe Tyler and his crew came out on a Tuesday evening and quickly took the tree down and removed most of the debris. He said he'd return first thing the next morning to remove the rest of the debris. He returned the following day, removed the remaining debris and advised me he would make a phone call to have the utilities marked. Once the utilities were marked he said it would be a couple of days and he would return to grind the stump and plant seed. It was several days but he did return and grind down the stump and seed the area. I'm not sure why he didn't leave us a bill as he indicated he would leave a bill in the front door or the mailbox when the job was completed. A few days later Tyler stopped by our house and my husband paid him. We were very satisfied with the work that was performed and the price was affordable. Nothing was damaged when the tree came down and there were a few obstacles Tyler and his crew had to work around. All debris was removed and the yard was left clean. I would use Tyler again but I would caution you if you decide to hire him for tree work be advised the work might not get completed promptly. If you don't have an issue with that he's a good choice.

Description of Work
Removed a dead maple tree from our back yard, ground the tree stump down, seeded the area and haulded away all debris. The tree was around 20 years old and had been dead for approximately 1 year.