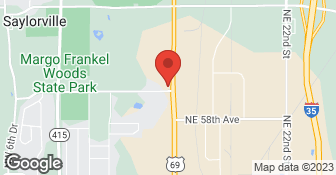 City Builders has been improving homes in Iowa for 24 years. We specialize in Replacement Windows, Sunrooms and Luxury Baths. Our Luxury Bath product is a very popular one-day bath remodel system. Our thousands of customers have come to depend on our excellent workmanship and satisfaction which is reflected in our Better Business Bureau, A+ Rating year after year after year. City Builders also operates a full time siding and seamless gutter machine and a leaf protection system. The company operates facilities and showrooms in Cedar Falls & Des Moines providing our customers with an improved quality of life by making their homes more beautiful & energy efficient! With City Builders replacement windows, you have chosen to investigate the finest window available, offering style, beauty, energy efficiency, durability and a 50 year warranty! Guaranteed to make your home both beautiful and energy efficient, we are confident that you will gain many years of enjoyment as you look through your new windows. By choosing our exclusive THV Compozite windows, you are receiving the finest and most premier window on the market, designed to meet the needs of the most conscientious, value driven and discriminating consumer. Your new THV Windows will be easy to maintain and will add comfort and value to your home in addition to saving you money on energy bills. Along with our Four Seasons sunrooms and Luxury Bath Systems, you're gonna love the improvements to your home, and that's why our logo & motto is simply; City Builders "Love Your Home!"...

We specialize in working with your insurance adjuster and their estimates. We guarantee your satisfaction and we won’t leave until the job is done right. We pride ourselves on the quality work we provide, while delivering great customer service! Check out our services offered and call or click to schedule a free estimate today.  …

We are a family owned and operated company that values honesty and integrity, and stands behind our work. We offer over 20 years of industry experience. We specialize in seamless gutter installation. Our services include new installation, repair and cleaning. We offer a variety of color choices for your new gutters and options for leaf protections systems. We provide high quality and warrantied workmanship for residential, commercial and contractors.We look forward to building long-term relationships with our clients and guarantee your satisfaction!  …

Renewal by Andersen of Des Moines is your resource for custom window and patio and entry door replacement, as part of the Andersen Corporation which is one of the most recognized window brands in the country. Serving Central Iowa, our highly trained, employee-installers of Andersen windows and doors can meet your needs in a friendly and thoughtful approach. Our windows are made of Fibrex material, which gives our windows the strength and durability of wood, and the low-maintenance features of vinyl. You won't see the hassles of expansion and contraction like vinyl and rotting like in a wood window. We also sell quality, innovative Provia entry doors. Locally owned, operated & trusted. Call for special offers and financing options.  …

They were horrible to deal with- The communication was confusing because so many people were involved. Their story changed depending on who you talked to in the company. They didn't respond to calls, they were late doing the project several times,The installer was unprofessional and slow. He smoked half the time he was at my house when we was supposed to be installing windows. I came home one day and he was in my garage smoking cigarettes (with one hanging out his mouth) near my Harley and lawnmower and gas cans. They ordered the wrong front door for my house TWICE. I finally just decided to keep it and deal with what I had although I was not happy. They took about 3 times as long as they should have to install the product. The sliding door in the back had leaks in it when it was installed. It was expensive and if it was a good product I would be ok with the rest of it it but it still is not something I would have done again if I had a choice. The salesmans knowledge of the product was not great. The back door is really hard to open and they told me its just because its new but it has been months and it still is super hard to open. I used a different contractor for the siding and HIGHLY regret not using the other guy for windows and doors as well. I like the windows but they were not worth the hassle of dealing with this company.

Description of Work
New windows and doors installed in our house.