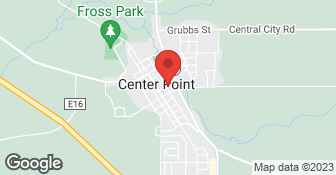 At American Pride services, we provide a variety of services from tree removal/trimming to framing repairs, some remodeling. Repairing/replacing steal on a building. Send me an email or phone call and we can see what you need help with.  …

We moved into our house about a year and a half ago and immediately discovered that, though I loved having a tree, the tree in our front yard was dead and roots were growing in our drain. Other places I had called were a month out just to get me a quote when co-workers of mine suggested Pray Tree Service. Though I usually left voicemails when I called, they would always reach back out to me. They got out and gave me an estimate same week, and it was only about a week later for when we scheduled the tree removal. They got to work early in the morning and were done by the later afternoon! Pricing was absolutely fair, very friendly guys and a family owned local business. They even went out of their way to help me get out of my driveway to go to work (I live on a busy road). They also gave me a fair price on the removal of the shrubs in front of my house so long as I got it done the same time, which I did! Great service overall.

It went better than we ever expected. Joel came to our home for a bid and we knew then, he was the one we'd hire. We have had 4 other offers but they were not good at returning calls and/or would show up hours later with excuses. Joel called to confirm the job the day before and asked if we had any questions. The crew was here the next day on time and worked non stop and as quietly as they could removed the huge maple and stump. Before leaving they cleaned up the yard so nicely, which wasn't expected. I am not one to write reviews but these guys rocked the job!!!! Highly recommend!! They will treat you right and with respect

Other than some communication issues, this company is stand-up. The tree and stump were removed in one day and, other than the spot were the tree formerly stood you would not know they were here!. Joel initially bid 1500 for the job, which I hesitated at. He then told me 1300 was as low as he could go. After seeing the bang up job they were doing and realizing this was a small outfit, I relented and gave him the full 1500. I had to go to work before they were done. While at work Joel called and said there was an accident when they were loading some of the very large logs onto their truck. One of the logs shifted and rolled off the truck, cracking a corner of the driveway. Because of this, he said he was returning the full 1500 for the job. He was extremely apologetic. My wife arrived home about that time (I had called her to let her know). And Joell immediately gave her the money. She could not see any damage it was so small. She said no keep the money, to which he refused, insisting we keep it until the drive was repaired and, if we felt like it, pay him the difference. Long story short, this is a stand-up guy, who runs a stand-up business! Reasonably priced, and a great job!

Description of Work
Removal of a mature soft Elm and stump

Called this company due to some reviews from people in my neighborhood. We wanted a mature Elm tree in our front yard removed. They responded promptly to my call requesting a quote, and showed-up the next day to provide the quote., . The owner (Joel?) said he would be back in 2-3 weeks to remove the tree. I called after two weeks to confirm, and ask if he had a date in mind. No eresponse. I called again after 3 weeks, again asking if he had a date in mind. No response I should mention that one of the two phone numbers provided no longer work. i called again today, asking if he still planned to remove the tree, or decided end not to take the job. No response. In my exoierence with this company, they are a "Do not do business with.". Unresponsive, shady,fly by night.

Description of Work
bid. Mane that was it.

They did an excellent job. I'd hire them again.

Description of Work
They removed 4 large maple trees that were overhanging our house.

They were on time. They came in right away. They are very courteous. They got the job done. They were very clean. It was all done in one day.

Description of Work
Pray's Tree Service took out four trees for us.

They came within a week and took out the tree, ground out the stump,cleared and took away all the debri. They filled in the hole and leveled the ground. I was very pleased with the work they did and would not hesitate to call them again.

Description of Work
I had them take out a large round evergreen that had gotten flattened during a winter storm. The owner came out within a couple of days and gave me a written estimate. I immediately accepted his bid and he said they would get to it as soon as possible. .

I had them come over to evaluate the condition of the tree. When it was determined that the stability of the tree was compromised and was risky to leave up, they scheduled to come and take it down just two days later. They were able to take it down without the use of the boom truck and thus helping me avoid taking down part of my fence. Because they had to move the tree out of the back yard with some sort of a little front loader, it did tear up my grass quite a bit. They cleaned up all the branches in the yard very well and even took some branches I had piled up next to the fence from an earlier wind storm. I have used Pray's twice now and have been very happy with the job they have done. I would definitely recommend their services.

Description of Work
Took down a large tree in the back yard. The tree was split to the ground and the back yard was fenced in so they were not able to use the boom truck. Instead, one of the men climbed the tree and took it down a piece at a time.

I would not recommend them. I have a big yard. The owner's teenage son did the work and he wasn't very responsible. He did a great job when he showed up but he just did not show when he said he would. The price was great. It was very hard to reach him.

Description of Work
I used Pray's Tree Service for lawn and yard work.

Price seemed reasonable and was prompt and convenient -- able to do work while I was away and sent me a bill shortly after. Will be the first place I call if/when I need more trees removed.

Description of Work
They removed a couple trees for me.