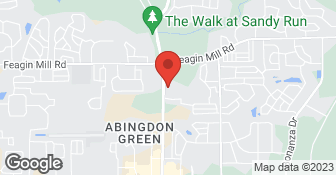 Provision Roofing, is a company that specializes in installation and re-installation of residential and commercial Roofing Systems. Provision Roofing is locally owned and operated, and fully insured. Along with being a member of the Better Business Bureau with an outstanding rating of A + with 10+ years of Customer Service, We are the only Certified GAF Roofing Contractor here in Warner Robins, Georgia. Every protect is supervised by a Company Protect Manager resulting in a perfect record with the BBB and a 90% referral based company....

From contact mixed work through the insurance laid process and made sure the work was completed thoroughly and to our satisfaction.

Michael came at appointment time. His estimate was the lowest of the three we got for the same roofing. Plus he told us about the "Roof for Troops" rebate. Installation was professional and thorough. Our final pkg was delivered on Sunday. It contained all warranty information and pictures of our home with our new roof.

Began email on Dec 29 to schedule appt for estimate , received 1 follow up email, replied and never heard from company again.

The company was, upon my first contact, very professional sounding even sending me via email a company history, selected reviews and BBB rating. After that communication was nonexistent. After several follow up calls by me to arrange for them to view and quote my job Michael showed up. The bid proposal was finally emailed to me three days later. The bid proposal was considerably higher than a previous top rated provider had offered. We did not offer Provision Roofing the job.

Description of Work
Placed a bid on a roofing job

Michael showed up on time. He displays pride in the materials his company uses and is very concerned that the roof looks good as well as being functional. I am very happy with my roof.

Description of Work
Tear-off and re-roof.

The day the work was scheduled, the work crew arrived on time and began work. The roofing crew removed all the old shingles and tar paper, checked the roof sheathing for deterioration and replaced any that needed it. As detailed in the contract, a leak proof membrane was placed over the transition between the existing roof and a roof that had been built over the patio. The complete job was completed in approximately 8 hours with cleanup around the property taking a bit longer. I was very impressed with the cleanup after walking around the house and finding no debris or nails on the ground. I was impressed with Mike's professionalism and recommend his company to anyone in the area looking for roof replacement and or repairs.

Description of Work
Mike advised his company would eliminate my leak problem over the patio by applying a leak proof barrier, upgrade my ridge vents and replace my old shingles with a higher quality shingle with a 30 year guarantee. All old debris would be cleaned up and hauled off in a company trailer.

Outstanding. Michael pre-staged all the materials the day before the work crew showed up. All the old shingles, nails and tar paper were cleaned up, repairs made to the roof and new roof back on in less than a day. These guys were great. The crew was pleasent to deal and talk with. The were very professional. Michael and Jessica were great people to deal with.

Michael could not have made it any easier. He came out on a Saturday to inspect, had all pictures required by my insurance company sent to them, started work immediately, work was complete in less than 2 days and the crew cleaned the entire area, including vacuuming my deck. EXCELLENT JOB!!!!

After I called they came out the next day, which is great when you have a roof leak. After I agreed to their estimate which was the same day they came out, work started the next day. Work was good, had a problem with one one shingle broken which wasn't going to cause a leak. They had to order the shingle and when it came in they called and were out the next morning to replace it. I was very satisfied with everyone I dealt with. They showed up when they said, they did great work, had a great price, and they were easy to talk to. I would highly recommend Provision Roofing.

We are a roofing company that specialize in 100% customer satisfaction. We install metal and shingles roofs. Storm damage experts.  …

Family owned and operated since 1998. Our differentiation is our people and our shingle roof-only focus. We have crews and project managers that have been with us between 5 to 20 years. This is extremely unique in the roofing industry. This allows us to guarantee to you that high quality crews and project managers are working on your home. We take our craft serious and you will notice the difference when you get a free roof assessment or free quote from The Piedmont Roofing Company. Another differentiation for Piedmont is that we focus strictly on residential, asphalt shingle roofing. Many contractors do multiple trades (gutters, siding, etc). For something as important as your roof, consider a specialized contractor that focuses only on roofing. We perform over 300 residential roof projects annually with a large portfolio to showcase. Piedmont Roofing values integrity, quality, and service above all else. We provide free inspections/assessments to customers for insurance claims. We meet with your insurance claims adjuster without any obligation or money up front. Learn more of our story at piedmontroof.com. We look forward to serving you!  …

How is Provision Roofing overall rated?

Provision Roofing is currently rated 4.4 overall out of 5.

What days are Provision Roofing open?

Are warranties offered by Provision Roofing?

What services does Provision Roofing offer?