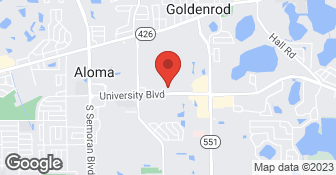 For over 40 years, A-Screen Repair has been installing and repairing screen enclosures for Orlando and surrounding areas. We've earned top rankings on Angie’s List because, unlike many of our competitors, we never use subcontractors. Our uniformed technicians are fully trained, highly experienced, and employed by A-Screen Repair. Even better – our dedicated field managers have been with us for years. Your satisfaction is our top priority because we want you to enjoy awesome outdoor Florida living. CALL rather than e-mail. Please do not leave any messages through Angie's list. Please call our office directly Additional phone numbers - (407) 831-1811...

A-Screen Repair did a great job on updating my patio enclosure. I had the left screen wall (with access door and doggie door) totally rebuilt. The doggie door went bye-bye and a new wall with new door and threshold were installed. I also had all the kick plates and screens replaced. The two-man crew were on time and did a great job with the rebuild. They cleaned up after the job and made sure I was satisfied with their work before leaving. Like the original enclosure (also installed by A-Screen 22 years ago), my rebuilt enclosure looks great and should last at least as long as the original.

The quote was a good price. Austin and his worker showed up not only on time but a half hour early, finished the job and cleaned up. He explained anything I questioned. Was very professional yet personable. I would use them again.

Description of Work
Replace the entire screening covering my patio.

Great service, easy to schedule with, they showed up when they said they would and crew was very nice. We are very satisfied with the work they did and will definitely use them again

I do not recommend this company. I called them to repair 6 or 7 screen panels and I had to wait about 6 days before they could come out. I was okay with that as I understand they are busy. I received a call the day before confirming the appointment and the time and that was fine. On the morning of my appointment I received a call from them saying that they could not make it today. I explained to the gentleman who called that it was very important to do it today as my daughter's engagement was the following day and part of the plan was to use the outside space for guests. He didn't seem to care and kept repeating that "there was nothing they can do". After hanging up the phone I went on their website and sent a message basically explaining the situation in hopes that someone who cares would read the message. At the same time I informed them that my experience will be shared online for potential clients to read. A few minutes later I received a call telling me that they could do the job that same afternoon. I thanked them and apologized and again, hoped that the job would be done and we can all move on. One of their employees showed up and before he does anything, he started to point out 3 of the panels that he said, he was not able to get to. He quickly told me that an estimator has to come out and take a look to give me an estimate on the work that needs to be done to make them accessible. He didn't seem to have any desire to do any work. He didn't even repair the other panels that don't have any obstruction. When I made the appointment I was not asked any questions about any possible obstructions and the possible need for an estimator to come out to do an estimate. It is obvious that they created this situation because they overbooked themselves and someone had to be bumped and that happened to be me. I will never use this company again and I will make sure that this experience is shared on every review site, BBB, and social media outlet. What they have done is unfair and unprofessional and my daughter's engagement will not go as planned without the ability to use the outdoor space. By the way,

After reading many very good reviews I chose A Screen Repair to do the minor work for my screen enclosure (2 door locks and 2 screen panels). I called another business as well, but they took a much longer time to respond, although their estimate was cheaper. Neither business answered the phone when I called during business hours. I had to leave a message. A Screen Repair was the first to call me back. The techs showed up at the appointed time ready to start the job. However, I wanted the type of locks that used keys and they didn't bring any of that type. They said I hadn't specified that type, which was true. But if you offer more than one type of lock and I say I want a lock, wouldn't it be logical to ask, "What type do you want?" I wasn't aware that there were door locks that didn't use keys. I can't imagine that I'm the first customer that ever asked for a lock and didn't specify they wanted the type that used a key. Anyway, they didn't want to do the other part of the job (replace the screens) right then since they would have to bill for a separate trip charge when they came out again to install the locks I asked for. That seemed a bit odd. They were already there. My job had been scheduled. It wouldn't cost them any more time or effort to do part of the job right then. But they wouldn't. So I had to make another appointment and wait a week before they could come back. They set a two-hour window in the afternoon of the next appointment day. Three hours before that two hour window began I got a knock on the door. They said their customer had missed their morning appointment so could they start my job now? Since I happened to be home I said yes. But it annoyed me that they hadn't even called me first to let me know they wanted to come over three hours early. I guess if I hadn't been home, or ready, they would have come back at the scheduled time. It didn't hurt to come early, but it's not a good idea to surprise your customer when you do it. Once they started the job things went pretty smoothly. Christa was very polite and told me what they were going to do and asked for my input before they started the job. They did a good job. So overall I felt they did the job well. However, in the future I hope they will start asking customers what type of lock they want when one is requested. Also, if their schedule changes please don't just show up at the door unannounced. Call first. The next time I need a screen repair I will probably try another company first. A Screen Repair didn't do a bad job, but they could have communicated much better.

Work was performed replacing several screen panels. Less than two month later, one screen developed a small hole. I called the company and they said there had been a hail storm since my repair and they would not warranty any repairs. As the owner of a multi-million dollar business, the proper response should have been, there was a hail storm since your repair so we cannot warranty the repair, but will be happy to repair it at 20% off or at our cost. This would have retained me as a future customer. But, now I will tell my friends and neighbors to avoid this company.

The work was done quickly and looks nice. My complaint is that I approved a written estimate of $401 for the work, which was listed on estimate as 4 panels and a door. When I was billed, it was $486 for 5 panels and a door. I wasn't informed the job was going to cost more than the estimate.

Great job. Two weeks after the job was done a hurricane hit and NO damage to screen.

Went fine, arrived on time, did the job quickly and cleaned up afterward

It took 2 days and we’re very happy with the results.

How is A Screen Repair Inc overall rated?

A Screen Repair Inc is currently rated 4.8 overall out of 5.

What days are A Screen Repair Inc open?

A Screen Repair Inc is open:

What payment options does A Screen Repair Inc provide

No, A Screen Repair Inc does not offer eco-friendly accreditations.

Does A Screen Repair Inc offer a senior discount?

No, A Screen Repair Inc does not offer a senior discount.

Are warranties offered by A Screen Repair Inc?

What services does A Screen Repair Inc offer?

Are there any services A Screen Repair Inc does not offer?