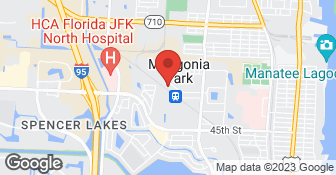 I am a third generation roofing contractor located locally in West Palm Beach. We are a GAF, CertainTeed & MuleHide certified contractor, and a certified PolyFoam applicator. We are a member of the Better Business Bureau & have an A+ rating....

Overall a good experience. I would recommend using Storm Roofing. Britni at the main office was very helpful throughout the job. She was very responsive and professional and kept me informed. Price was fair and the work quality is good.

Had my roof replaced from shingles to a standing seam metal. Extremely satisfied with the service provided. Great investment and it looks fantastic.

We replaced our shingle roof with a metal one. Unfortunately, we chose Storm roofing. Because they don’t pre-drill holes with a template, they left thousands of rust spots from metal shavings on the roof, even after we forced them to clean them up 3 weeks after the install. They kept referring to the protective coating on the panels as a sacrificial layer designed to be melted by hot metal. These rust spots from poor workmanship void the manufacturer’s warranty, and Storms warranty isn’t worth the paper it is written on seeing as they wouldn’t fix the problems now, much less in 5 years. Free-hand screw placement also meant the screws were not lined up, which looks like crap, and resulted in them putting rivets in holes where they accidently put screws and blank spots where they missed placing screws. The panels themselves were not aligned square on the roof, which caused one line of screws to start on the flats and run over the main rib. They left rotten fascia, then tried to charge $50/foot to replace it even though they only did 6 of the 20 feet that was covered by the quote. Exposed screws are visible where they missed or broke the drip moulding when attaching drip edge, fascia remained unprimed without angle butts even on the second try, and charges for 2X4’s appeared on the invoice when none were used. Beyond their inability to use accepted methods/practices for the roof install, there wasn’t a hint of professionalism to go beyond these standards with forethought into how to best align the panels so the seams wouldn’t show up in bad places, or customer service in taking our concerns seriously. Rather, they treated us rudely on the phone and basically hung up on my wife after I decided I would rather talk to a lawyer than to them again. Their goal was passing code inspection (it took 2 tries), not producing a quality product or happy customers. If they accepted credit cards I would have had someone else on my side, but I see now why they are cash only. If you want a fast, sloppy job slightly cheaper than others, with no warranties, chose Storm. If you want a quality, profession job that you can be proud of, find someone else. If you want further info, e-mail me at neverstormroofing@yahoo.com and I can send you more pictures and documents of our misfortune. In the meantime, we will be washing the rust spots with Marine 9 and trying to figure out how to get the strip of underlay off from our powerlines.

Description of Work
Replaced an asphalt shingle roof with a metal roof.

Description of Work
Was happy with provider for years. |Then scheduled another appointment and took 3 months |to get to house. Never called before workmen arrived, |as previously requested. Could not do the work as I was |leaving for work.

Great company. replaced a 41 square roof including strip of in 4 1/2 days. Work was fantastic. Workers cleaned up after each day's. I was suprised to see that contractors of this quality still exist. Completely satisfied. fjc

His workers were on time and professional. They even cleaned up after themselves.

Description of Work
punctual, professional and clean! Wheneveryoneelse told us we needed a $20,0000 repair,Mark was honest and said we could do a patch. He was right, no leaks sense!

Jeff Denson Pressure Washing offers professional home Power Washing services. We are owner operated and proud to work out of the Port St Lucie and surrounding areas. We can clean most exterior services and we maintain a high standard while conducting our business. Please call us or request a free estimate online today!  …

Bonded
Insured
All statements concerning insurance, licenses, and bonds are informational only, and are self-reported. Since insurance, licenses and bonds can expire and can be cancelled, homeowners should always check such information for themselves.To find more licensing information for your state, visit our Find Licensing Requirements page.
General Information
Free Estimates
No
Eco-Friendly Accreditations
Yes
Payment Options
Check
Senior Discount
No
Emergency Service
Yes
Warranties
Yes

Storm Roofing Inc is currently rated 4.2 overall out of 5.

No, Storm Roofing Inc does not offer free project estimates.

No, Storm Roofing Inc does not offer a senior discount.

Are there any services Storm Roofing Inc does not offer?