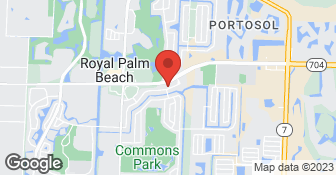 They arrived right on time and kept in communication with us the whole time. They are trustworthy and amazing people. This is the third time I have used Royal Palm Flooring and support them fully especially since they are a local family owned business.

Description of Work
We had carpet installed in five bedrooms including closets and it looks so beautiful.

The men who did the installation were professional and very pleasant. We had a small issue with one plank a few months later and Rich responded immediately. I do not hesitate to recommend this company.

Description of Work
We had laminate floors installed in 3 bedroom

Owner was very professional and wanted the work...the installers were absolutely great, they paid attention to every detail we asked for and the install was very fast...they moved the furniture for us and placed everything back after installing the floor...EXCELLENT JOB ALL AROUND!!...Great price and customer service!!...I will have them back to install my new carpet very soon!!

They accomplished everything in a timely and professional manner.

The inly thing is I need to call them back because I noticed recently that they put trim and it doesn't meet in one of the rooms so I need them to come back for that. Then there's a place where I tried scrubbing it and looks like some sort of glue must have gotten on it and it won't mop up. Otherwise, they were prompt, careful and very good at what they did. I just need to follow up a couple of things.

Description of Work
They put new flooring in two rooms and one closet.

We had decided to replace the carpeting in our bedrooms with a wood laminate (approximately 735 square feet). We had visited a number of stores to look at samples and had several representatives come to the house and measure. We chose Royal Palm Flooring because of their product selection, their price was competitive, their reviews on Angie's list, and they were a local business about two miles from our home. We signed the contract on May 31, 2013 and the work was completed over two days ending June 11, 2013 as originally scheduled. We had moved all of the small breakable items out of the rooms before the installers arrived. The installers placed felt pads (which I supplied) beneath all of the furniture before moving them. The quarter rounds that are attached to the baseboard came with a white primer and we painted them prior to installation to match the baseboards which we had planned to repaint. The installers, Brian and Brandon were from Brian Clapper Flooring, Inc. They did a very careful and professional job installing the flooring. They arrived on time, were very polite and did their job. They came across a number of and quot;badand quot; boards (imperfections, etc.) and put them aside and obtained additional boxes of flooring for the second day's work. They also found a section of the master bedroom floor that needed to be ground down before the floor could be installed (the dust set off all of the smoke alarms so we took them down until the job was completed). They cleaned up after the job was complete and placed the old carpeting and padding (put into small sections) at the curb were it was picked up with the normal large item trash pick up. To summarize, we like our new floors and would use Royal Palm Flooring again.

Their prices were reasonable, they were punctual, attentive to detail and, overall, did an excellent job.

Supposed to install laminate floor in 2 bedrooms, but could not secure the product at the same time, so I agreed to do one floor first, 2nd at a later date. I Postponed my furniture delivery for master bedroom pending the floor installation. They canceled with me the day before at about 4PM, stating a problem with the installer. I already had everything cleared out of the closet and room sitting in my living room, a significant amount of stuff. They claimed that they could not give me a reschedule date. They called back and said that they got someone to do the job. He came with an assistant a day or so later. BUT: he left abruptly without explanation without finishing the sealing of the molding, seemingly because it was getting late and they had another job that day. (At first I could not identify why the job looked so bad) and I had been promised a wood molding, not plastic. After much complaining on my part they had him return another day to finish the work .One owner in there was fairly responsive, but the other appeared to have an attitude. After completion it looked good, but I canceled them doing the second room after this experience. My new furniture delivery could not be postponed again and HAD to be delivered on an old rug.

Description of Work
We got new hard wood floors in three bedrooms. They did an excellent job!

They did a wonderful job! The work they did on the floor tiling was excellent! The installer did such a great job that we asked for him to come back to re-do our bathroom flooring; He told us that he might not be fast, but he's very good at what he does, which was true! He did a beautiful job and was very meticulous.

Description of Work
They installed new flooring. We worked with them a few times.

We specialize in interior remodeling, which covers kitchens, bathrooms, floorings, paint, and more. We organize each project by steps, that way each worker will use their own skills to advance faster and professionally making each project our own and personal one. This is a family business that comes with a father experience, who's been handling and working on remodeling projects for over 45 years.  …

NOVA FLOORING is a company that was created and developed with the aim of presenting the market with a line of differentiated floors and products, completing its objectives by promoting marketing campaigns with a greater balance and always staggered its greatest differential, the service. Call us for a free estimate 561-929-3108 or 754-246-6867  …

Large showroom and inventory of products. Buy today we will install tomorrow. Ask us about our special financing options.

Royal Palm Flooring is currently rated 4.8 overall out of 5.

No, Royal Palm Flooring does not offer a senior discount.

No, Royal Palm Flooring does not offer warranties.

Royal Palm Flooring offers the following services: Large showroom and inventory of products. Buy today we will install tomorrow. Ask us about our special financing options.