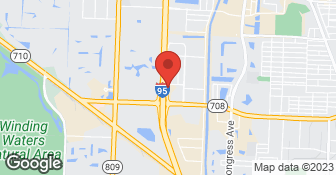 We tried several companies and Bargain Bob's was the best. The sales guys were not pushy and led us to look at their nice variety of tile samples. They also were patient with all of our questions and sent a guy to measure our condo free of charge. The company is located in a warehouse in an industrial section of West Palm, next to an RV business (you can see the yellow sign off I-95). They sent two experienced installers and they showed up on time and got the job completed on schedule. I would say Bargain Bob's is a one stop shop where you can buy your tile, delivery and installation all in one place at a competitive price. They also accept credit cards and financing. Good job!! Ben and Linda

Installed carpet which over time stretched badly. Called them about a year later to restretch and it was still buckling after they left. I called again 2 1/2 years after initial installation because the carpet is so badly stretched it is in bunches in spots. They wanted to charge $300 to restretch, even though I told them it had never been done properly to begin with. I just had a carpet cleaner in (former carpet installer himself), who said my carpet had not been power stretched, and referred me to the website of the carpet industry's installation guidelines (Carpet and Rug Institute) where it states power stretching is MANDATORY. When I just called Bargain Bob's and told them I want them to restretch at no charge, they refused to do so because it has been over a year. When I told the person I spoke with that the stretching was not done properly he argued with me over the fact they knee kick rather than power stretch. Again, I told him power stretching was mandatory and he told me it didn't matter if they didn't do it right because my warranty was up. He also muttered something which he thought I didn't hear, but it was quite rude and disrespectful. I gave them a chance to come out and rectify the situation, but they wouldn't, so now I plan to take them to small claims court. To me, Bargain Bob's was no bargain at all. I guess you get what you pay for. I definitely would not recommend them to anyone.

After the installation, we noticed some areas on the stairs and in one of the bedrooms where the carpet was not properly sealed against the wall and when walking into a closet, we could feel some nails sticking up. I contacted Bob's to have a repair done...simple and probably wouldn't take more than 30 minutes at the very most. Spoke to one of the salesmen and he told me someone would come out the following Monday at 11am. Well, no one showed up, no one called. I was too busy to follow up, so I let it slide. Now, a month later, I have the time to get the repair done, so early last week I called and spoke to Andy and he put me in touch with the installer, Richard. Richard and I spoke and he said he could come over at 10:30am that Friday, May 16. I raced home after an appointment last Friday morning so that I would not miss Richard. An hour passed and finally, at 11:30am I called Richard to ask him where he was. He had completely forgotten about our appointment! He was no where near our home. I rescheduled with him for this morning at 10:30am, Monday, May 19. I confirmed morning of at 7 am via his cell phone and text that he would be here at 10:30. He responded and confirmed. Well, 10:30am has come and gone and at 10:45 I texted him and received no response. I then called the main office for Bob's and spoke again to Andy. I explained to him that Richard was a no show and that I had an appointment elsewhere at 11:15a. He called Richard and shortly after, at about 11am, I received a call from Richard stating he was at least 30 minutes away. I'm frustrated because when I make an appointment with someone, I keep it or call to let them know I am running late. I guess this company does not have the same work ethic and it is disappointing. We spent A LOT of money on flooring with them and I expect better customer service and better quality workmanship. I've rescheduled my appointment AGAIN for today at 3pm. We'll see if they show up. If not, I may need to contact the Better Business Bureau and file a report.

Description of Work
We hired this company to install new carpet in our new home. Initial experience was great and found exactly what we wanted.

At Prestige Carpet & Tile Clearance, we are your one-stop-shop for all of your carpet, tile, and flooring needs in West Palm Beach, Palm Beach County, FL, and the surrounding communities. Whether you need assistance replacing carpet or flooring installation, we can help you with all of your needs. We specialize in: Carpet Tile Vinyl Laminate Wood Floors Waterproof Laminate Backsplash And much more To learn more about the full scope of our services, get in touch with us today. We look forward to assisting you.  …

We install and repair floors. I install tile, vinyl and carpet. We remodel all kinds of flooring. I am experienced, licensed and insured. I also do painting.  …

FOR FASTEST SERVICE PLEASE CALL 561-747-1033 DIRECTLY! Trust an expert for your carpet service! When the job turns from difficult to worse we always try to come up with a solution! No job impossible! We've been in business for 33 Years. A Turn Key Consultant will come to you so that we can specialize our service. We focus on quality not quanity with our customers because we know you want the best. We provide professional yardage measurement and installations in homes and new and used yachts. We also help you with wholesale carpet, tile & wood. We will do repairs, and consider each job as equally important. There is No Job too small. Our holesale show room offers a "best deal of the week." Additional Yacht Website: http://yachtinterior.net/.  …

BARGAIN BOB'S CARPETS is currently rated 3.3 overall out of 5.

No, BARGAIN BOB'S CARPETS does not offer eco-friendly accreditations.