As a trusted geotech company in Florida, Helicon specializes in using the latest technology to repair your sinkhole, stabilize your soil or structure, and prevent future damage with pre-construction. We are experts in pre-construction, soil and structural stabilization, & sinkhole repair. As the premier provider of geotech construction services throughout Florida for over 15 years, Helicon prides itself on providing high-quality service, for both insurance companies and private customers with handling all repairs and pre-construction work for both residential and commercial projects. We strive to exceed everyone’s expectations. With our reliable, tried and-true geotech construction processes, you can rest assured that Helicon is the expert you need....

Very Bad No one Called.

We apologize for you not getting a response. We normally are very prompt about returning messages. Please call us at 813-567-1065 to discuss your situation. Thanks, Helicon.
5.0

The estimate process was easy, they educated me and it was very professional experience.

Debra was terrific. They just specialize more in foundation work and sea walls and gave me recommendations for other contractors who could help me and helped with some of the research.

Description of Work
My driveway is cracked. I've filled it for 19 years. I'd like it to look pretty.

Thanks for the kind review! We appreciate it!
1.0

I called the number listed. The lady informed me that I called their Tampa office, I'm in Orlando. She said they only do sinkholes and do not Do foundation repairs anymore. I asked if she could refer a company, she said no. I asked if they had an Orlando office where I could call and get a recommendation. She said she's not sure if there are any. So this company that used to do foundation repair doesn't know if anyone else does quality work? They don't know if they have offices in Orlando when she seemed perterbed that I called the number in Tampa? Update your company info then. Update the phone number and the work you perform. Don't say you perform a service and then get snotty when someone calls needing that done.

Hello Ms. [Member Name Removed] Thank you for the feedback you have left us as it is constructive with our language over the phone and training of our team and the extension of team members. We apologize for this experience as you were not given the most accurate information and we are looking into why that happened. Our team would love to learn more about your foundation needs as to how we can be a resource for you as we do service Orlando. What would be a good follow up phone number and email to contact you at? If you would like my information to contact me directly, I can be reached at Jeff.Philbin(at)HeliconUSA.com or 813.514.8518. Thank you so much & have a great day! Cordially, Jeff Philbin Helicon, Marketing Director
5.0

We had talked to like three different companies. This was in Florida and it was about a month ago and it hit national news about the sink hole and the houses went under. And then just a couple of weeks ago, two more houses went into the sink hole. That property is two miles from the house I used to own. Half of Florida is a big sink hole. They had figured out some structural integrity problems and in order to sell my house I had to have $30,000 of work done. They put piles down into bedrock. They didn't do the whole house, but they did it for half the house and it cost me $30,000, but they just did an outstanding job. Even the houses that had went down in the sink hole, they had had structural repair work done within the last two to four years. It didn't make a darn bit of difference; the houses still went under. At least these guys got mine to where I was able to sell the house. They came out and estimated what they felt would fit the specs that the engineers had given, what would be required, and then we hired them to do the work. Actually I signed a letter. They gave us an estimate and actually the final bill came in about close to what the estimate was. I had looked at their reviews on Angie's List and Better Business Bureau and they were right there at the top. They said what it was gonna cost, and that's what it cost. We chose them because of outstanding reviews, the integrity of the person who sat down with us and explained what was gonna happen.

Description of Work
This was for an estimate for structural repair job that I had to have done on a property that I used to have in Florida.

We didn't know it ahead of time, but the crew that was there was just outstanding. They were professional to work with, they cleaned up after themselves, and they were just nice people. It was expensive, but I think everybody else was gonna be expensive also. This was a very stressful experience, learning that I had a stabilization problem with my house. It was on the market and I needed to sell it, and they helped me through the whole process.

Description of Work
This was for foundation repair.

Better than expected. Service was excellent. Work was completed quickly and pricing fair. We had a great experience with this company and would use them should we encounter a future, fire, water, smoke or sinkhole issue. Helicon definitely comes to the rescue.

Description of Work
Remediation stemming from a water leak.

After the sinkhole was repaired at my home Helicon came in and did a fabulous job at my house in and out. I'm very pleased with their performance and professionalism

Description of Work
cosmetic repair at my home

Description of Work
We discussed sinkhole restoration with three companies; Helicon was the most knowledgeable and professional. We would not hesitate to recommend them to any homeowner who is facing the "unknown" with ground stabilization.

I am soo glad that I chose Helicon for my restoration. Richard, my project manager, was such a pleasure to work with. He provided all very professional subcontractors and help. If he was out of town, his office stayed right on top of everything. They kept in contact with me constantly through the whole process, to make sure everything was going according to plan and that I was happy with the work that was being done. I would recommend this company to anyone who is in need of a dependable professionl restoration company.

Description of Work
Restored my home after a sewerage back up. This included; replacing a lot of drywall in 5 rooms; replacing flooring in 6 rooms; and a hall; removing and replacing all of one bathroom tile, both walls and floor; repainting everything, even closet and room doors etc.

Thank you so much for taking the time to provide us such a glowing review! We will share your kind words with our team and appreciate working for you.
3.0

Description of Work
Installed foundation piers around house. Stabilize foundation due to sinkhole activity. My experience they were sloppy, cracked my hole side of garage, due to to much pressure. Almost $700.00 stucco damage to repair. We were told this would not happen. Not much communication from them during the whole process, about one week. Just hope the piers were put in correct. According to their final report they were. I would choose another company.

(removed member name), I am very sorry to hear about your poor experience. We value your feedback and are looking into this project, and will be reaching out to you today for a resolution. Thanks for your patience.
5.0

Description of Work
They referred me to another individual who was more able to meet my needs. They are an honest company that did not take advantage.

They were prompt and courteous, very respectful of our property.

Description of Work
They put in all the piers for our home. They kept the work area clean.

From the beginning of this process to the end it was a 100 percent seemless. From the 1st person we met to the field crews and office personal they were all so great. Everything that was promised was backed and then some. I have seen a number of these repairs happen in my neighborhood and none went the way mine did. My neighbors who had previously repaired with other companies even came over and said wow these guys are incredible. From there professionalism to the way they treated my home and property I seriously couldn't ask for any better. Once Helicon finished the underground we also hired them to do our cosmetic work. Once again everything was wonderful. My house seriously looks like a new home again. All I can say if anyone needs sinkhole repair... this company is a must us!!!

Thank you so much for taking the time to provide us such a glowing review! We will share your kind words with our team and appreciate working for you. 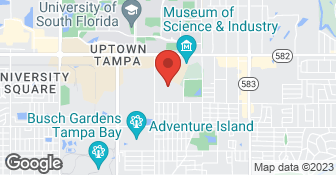 How is Helicon overall rated?

Helicon is currently rated 4.7 overall out of 5.

What days are Helicon open?

What payment options does Helicon provide

No, Helicon does not offer eco-friendly accreditations.

Are warranties offered by Helicon ?

What services does Helicon offer?