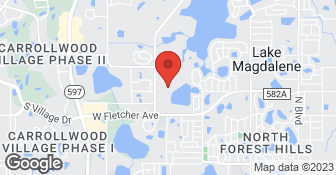 visit our web-site at www.designaluminumexchange.com...

This was an absolute nightmare experience. If you only need a cage and no cement work, you should be all right. But keep in mind, you get an estimate of the cost and then a bill when it's done. I never saw these people come out to inspect the job, either during the construction or after. They only did because I complained and refused to pay until the problem was fixed. They obviously just don't care. If you need a patio installed or extended as I did, the cement people are just incredibly poor quality. Knowing that I would be installing a cage, they installed their extension without considering what the level of the existing patio is and how that would affect the lay of the cage foundation since the foundation would extend across both the new and existing patio. So I ended up with a gap beneath the door of the cage, defeating the purpose of a screened patio in the first place. Mark continued to blame the homebuilder who laid the first patio rather than look at the fact that his cement people failed to reconcile the lay of the whole patio. The cement people came out initially in the rain and poured under the worst of circumstances, claiming that the cement pumping truck was on its way, so if they didn't pour, they would have to pay for the cement anyway. So their mistake was at my expense. Finally, after I refused to send the check to pay for the cage until this was fixed, the cement people came back out to make the situation "right," and what a pig they made of it! Aluminum Design gave a bid several hundred more than I was quoted by another company, but Aluminum Design sounded a little more professional. NOT the case. And Aluminum Design does not move sprinkler heads, which the other company did, so I had to pay extra for that as well. This was an all-around mistake to go with Aluminum Design. I urge you to take this review seriously and DON'T go with these people if you need cement work done before the cage goes on. I am sorry to have to write this review. I don't usually review a company whose work is poor, but I feel a need to let others know my story before they too are disappointed.

Description of Work
I had the patio extended 5 feet and a screened cage installed.

Mark did the estimate which was very thorough. He was prompt in providing the estimate after the home visit. The installers were quite and stayed focus on the job. It took 2 days and the job was well done. Very knowledgeable crew.

Description of Work
They were the company that installed our pool screen room a number of years ago. I am having the roof on the house redone and called as the roof job requires that the pool enclosure be disconnected and braced, then reconnected once the job is complete. | |They advised that they no longer work in Pinellas and that the fact that it was their original work had nothing to do with anything. | |If a company won't support their own work they aren't someone I'd ever recommend. Also, they had a couldn't care less attitude. Don't work in Pinellas any more see ya bye. | |You decide.

We're sorry Mr. [member name removed] received our response as flippant, it certainly wasn't meant that way. We installed his pool enclosure back in 1996. The work that Mr. [member name removed] was requesting a bid for today involves bracing, jacks and possibly scaffolding to support the enclosure (detached from the house) while work is being done by another contractor. We do not feel comfortable taking on the liability of such a job outside of our current work area. Our phone message left for Mr. [member name removed] in response to his phone message requesting a bid---we have not spoken personally--was not meant to be anything other than sincere. I am sorry if it came across that way. Sincerely Design Aluminum Exchange, Inc.
5.0

I would highly recommend DAE. Steve took the time to meet with me to address my design concerns and review the project details. Both he and Mark were responsive, prompt and professional. The DAE crew did a high quality job and finished it by the date promised. I am a fairly persnickety individual, hard to please, and not prone to writing reviews. They earned a positive review from me.

Full service screen repair company with 15 years experience. Family owned and operated. We take pride in our work and Sreen your home as if it was our own.  …

Bonded
Insured
All statements concerning insurance, licenses, and bonds are informational only, and are self-reported. Since insurance, licenses and bonds can expire and can be cancelled, homeowners should always check such information for themselves.To find more licensing information for your state, visit our Find Licensing Requirements page.
General Information
Free Estimates
Yes
Eco-Friendly Accreditations
No
Payment Options
Check, Visa, MasterCard
Senior Discount
No
Warranties
Ask for details

Design Aluminum Exchange is currently rated 3.6 overall out of 5.

No, Design Aluminum Exchange does not offer eco-friendly accreditations.

No, Design Aluminum Exchange does not offer a senior discount.

No, Design Aluminum Exchange does not offer warranties.

Are there any services Design Aluminum Exchange does not offer?