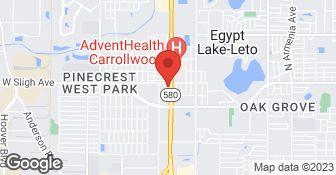 Newell Outdoors LLC DBA Sun King Pool Services provides superior expertise, technicians and equipment to provide the highest level of pool service available for pool cleaning in Tampa and surrounding areas. We are fully insured and we guarantee your satisfaction with all pool services performed by our professionally trained technicians. Our pool maintenance services extend beyond basic pool cleaning, pool repair and spa maintenance. We are your complete swimming pool and spa company. We provide spa installation, pool enclosures, remodeling and renovations, inter locking pavers, pool maintenance programs for every budget, leak detections, tile cleaning, vacuuming, backwashing, water chemical testing, stain prevention, stain removal and much more! Our friendly knowledgeable staff can help answer any questions or concerns you may have. Our company is totally committed and focused on our customer's highest satisfaction with our services. Through strong teamwork, continuous training, implementing the latest technology, and honest hard work our customers can rest assured that we are going the extra mile for their satisfaction.  …

Licensed and insured! Retail pool store and Residential & Commercial pool service. We also Remodel Existing Pools. All services provided are based on an honest open relationship with every customer we encounter and stand behind our work. Hours of operation - Mon-Sat 9:00 AM-5:00 PM ;Sun CLOSED. Commercial services 24 hrs a day 7 days a week  …

So far all is going well. My number one concern is not the speed of work, but the quality of the work at a fair and reasonable price. I understand that construction issues will come up. For one, we have had zero construction issues...at least not that I know of. It has been ugly to look at sometimes, but I understand permitting and the added that people will try to hold contractors to a timeline that they have no control over. But I will hold you to the commitment of quality! This, they are doing well. We are in the final phases of construction and all is going well. When I contact Eric, he responds quickly by text, or simply showing up onsite a day later, or someone else showing up on site. Eric takes his work very seriously, and he is very professional...and that's all I ask. Because we went with custom built pool, larger than normal spa, pool enclosure, pavers, gas heating, and saltwater pool; we requested 7 quotes. Do your homework! I do recommend Cody Pools. They may promise you the fastest or the cheapest, but they will make sure you have the best in quality.

Challenger built my pool about 25 years ago and installed fiber optic lighting. The fiber degrades over time and the lights basically stopped working. I contacted them to see what they would charge to upgrade my pool to LED lighting. I've done the research and it is doable. But, I'd like to have someone familiar with my original light installation to do the work, if possible. They did not bother to call me back and I thought that was exceptionally rude. If they had called and declined the job I would have been disappointed but I would have understood. But, they didn't even call me back.

Description of Work
No work was done. They never called me back.

We cancelled after reading reviews from prior customers on the BBB site and Goggle. We would have retained them if they had only provided us with an explanation of what went wrong with those prior pool projects and what is now in place to ensure those issue won't surface on our project. They refused. We had a great salesmen that was knowledgeable and an overall good guy. However; like I told him, he's paid to make sales not manage the projects on the ground so unless I have some assurances, I will bounce; which we did.

Description of Work
We contracted to have an in-ground pool installed.

The person from Challenger showed up on time. We discussed the project, he took measurements and did a 3d rendering on the spot. That pretty much where it ended. After several emails asking for the written quote, I have not received a reply, nor will I continue to try and do so. Very slow to respond this early in the process raises red flags for me. But then, after reading reviews and doing research into the company in the State of Florida, that in itself is a red flag.

Stay Away. Had pool installed and it was a nightmare since day 1. Everything is sub contracted out. Office does not communicate with project manager, sub contractors, or home owner. Only time they call is to collect a check. Pool was not built as agreed on signed contract, shotty paver work, left yard a disaster, installed incorrect tile, salt generator did not work, plaster was done poorly and has stains. Awful customer service, communication, and overall quality. Company screwed up the permitting and delayed build for 3 weeks. Was not complete on time as promised. Working with my legal team to take to court.

We met with Mark the svce rep on a Saturday afternoon. He seemed very eager for the business. We set up an appointment for that Wednesday evening. He was a no show. Have called on a number of occasions and left msgs. No return call, nothing.

We bought the pool years ago, but in the beginning it had stains in it. We found out later that the dirt they used to mix the cement had problems. There are several cracks as well that showed up right away. They sent a guy out, but he said there wasn't much he could do. I would not recommend them to anyone. There were problems all through the process.

Description of Work
The put in a swimming pool, which included an incloser.

It started on a Sat with the enclosure removal. on the next Tues the excavator came and removed the pool. On Wed the dirt came and filled the hole. On Thur they dug the ditch for the new footer. On Fri they poured the footer and on Mon they came and put down the Paver deck and on the next Wed they installed the new deck enclousre. After that it was area clean up and project done The hardest part of the whoe project is to have a clear understanding as to what the cean up is to look like.It is anly fair to have a clear understanding as it all reverts back to cost.

Description of Work
Wanted a pool removed. Contacted many .but Jay at Challenger responded with the most positve attitude. Being scared stiff of dealing with general contractors and subs. Jay walked me through it with complete understanding. Jay used absolutely no pressure to get the order. It just developed as a mattter of evolution. The work started on schedule and marched through the whole process without a blip.. All the infor on the sub's was furnished such as insurance and most importantly the lein releses. I can not be stong enough on reccommending the use of this company for work. It is a pleasure to deal with someone that when it was finished that one knows it was a good choice. Thank you Jay.

To start this is a well respected and established pool co in Tampa. Our experience is that the pool components have been placed well but the follow through has been deplorable. Six weeks after completion there are components that are not 'finalized'. These details include a missing check valve and electrical component for our salt system. In essence, once all the money was paid they became 'hard to get a hold of". Only after repeated calls to the project manager on his cell phone did things moved forward. I think the craftsmanship is commendable but one needs to stay on them continually or things will 'slide'. They know they are one of the best and frankly you want to have a pool company that will be around for the life of your pool. Their subcontractors repeatedly left trash and debris in our yard.