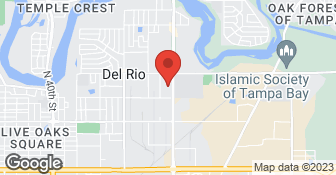 All Wood Cabinet and Natural Granite and Quartz Counter Tops Factory Direct Prices. Member of BBB, all the work is guaranteed. Cabinet & Stone International has been serving the great Tampa Bay Area as family operated business for over 10 years. The families have woodworking history for over 25 years in Fujian, China where we have the factories and granite quarries. Our company directly imports cabinets and granite counter tops thus eliminating the middleman-cost and prices are very competitive. Cabinet & Stone International has over 70,000 square feet of warehouses. This made us one of the largest distributors of pre-made cabinets and granite tops in the East Coast of the United States. Whether the order is from Grand Cayman or Upstate New York, a single cabinet order or a container, we are capable of meeting your needs. We believe in "No job is too small or too big."...

Their service is good. They treat me very good as a customer.

Description of Work
They did cabinet for me

70% of my cabinets for the living with dents dings and scratches, call the owner Ron he told me he would not be responsible since it was just cosmetic I will be taking them to small claims court

Description of Work
70% of the cabinets that were delivered to my home had dents and dings in them, I called and spoke to the owner and he told me that he would not be responsible because that is just cosmetic. The worst place I've ever done business with would not recommend them again

They have a great selection of cabinets and although the cabinets are shipped from China, they are much better than any stock cabinets you will find in a big box retailer that you find on any corner. These are made of all wood and look beautiful. I bought a remnant granite counter that was very affordable. I got top of the line granite for hundreds less than I could have gotten a basic top at the orange big box store. Cabinet and Stone delivered when they said they would and actually cut the granite and had it ready for pickup within 3 days of ordering. That's FAST!! The only negative is don't get the auto-close brackets for the drawers. They are tight and we actually had to take one of the drawer hardware off so it would close. These cabinets are so solid that you really don't need the auto close anyway. Would use them again and recommend them.

Description of Work
Provided the cabinets and granite counter for my bathroom remodel.

They came out to measure and discuss the work. About two weeks later they scheduled the job. They showed up on time. Removed the old counter tops and installed the new ones. They took great care to make them look good and they did a fine job. The price was for precut half inch granite and included a kitchen sink. The price was the lowest of the quotes we got by about $400. It looks great and they did an excellent job.

personally walked in, got a quote, worked the details. They send someone o take measures. came back, got final quote, final price and deliver date. everything went accordintly.

They are very good. They were just very efficient. They gave me a very good product. The office and staff are very friendly, clean and professional. I am not totally done with my job yet. But so far, they have been really good. The quality of the cabinets they provided are exceptional compared to what I could have got from other retail chain stores. With regard to responsiveness, so far they have been very good. They were right on time. I would definitely use them again in the future.

Description of Work
I went with Cabinet & Stone International. I bought my cabinets from them. I didn’t have them install or anything; I just bought them.

Everyone at Cabinet and Stone is professional, on time, and, a joy to work with. They made the process an enjoyable experience each step of the way. The end results are even more beautiful than I had imagined. I would not hesitate to recommend them.

Description of Work
I used Cabinet and Stone International.

Total nightmare. When l initially called for the service (having hole drilled) I spoke with Elizabeth, who advised she would speak with the installer and call back with date and price. She did so, stating $75. On the date of service, the installer, Orlando, drilled the hole. I asked him if it was possible to do something about several small chips around the sink. He stated "it's do able, but it"ll cost.". He stated an extra $75.00. I agreed to have it done. At no point, did he say anything about any "old crack that had been repaired.". There never was one. However, when I got home the next evening, I noted a crack in the granite from the front of the sink to the edge of the counter. I called the company Sat. Morning, speaking with a woman named Wou(or something to that effect)and advised her of the issue. She said she would call me back. No call backs Sat. Or Sun. I called again Sun. eve, leaving voicemail for Elizabeth. She called Mon am, saying no one had told her of the issue,but she would speak with Orlando. She left me a voicemail saying Orlando had "pointed out to me an old crack that someone had mended". Obviously, there was never an old crack, there is no "mended" crack anywhere, and if any crack had been there, he would never have touched the job. I called again Mon afternoon, and was again told someone old call back. No one did. I called back Mon eve, demanding call from manager. I rec'd a call from "Ron" who now tries stating the job was done by a subcontractor, and not his responsibility. He also now tries claiming that since it is a week later, he isn't responsible. Three different excuses for their shoddy work, dishonesty and poor service.

The service has been great. They were on time and we are very happy with the work. I would definitely recommend them.

I installed them myself. I was very satisfied with them. They have quality products at a reasonable price. The items are in stock. They provide friendly service. I'd ask people to check them out.

Description of Work
I purchased some cabinets and a countertop from Cabinet & Stone International.

We shopped around everywhere for granite countertops. I feel like I could write a manual by now. Cabinet and Stone, Hui and her husband, were extremely friendly and honest. Their prices were always the best, so we were concerned about if we would get what we paid for. As it turned out, they were excellent. Their installers did a fantastic job, except they did cut off a plumbing pipe and my plumber had to repair it. It only took some glue and duct tape. My kitchen countertops look amazing and they were able to schedule me in very quickly, since we just bought the home and were waiting to move in after the remodeling. They even perfectly matched up the waves in my granite with the backsplash. This is a special talent and Hui's husband has it. They were so good, we had them put in granite countertops in our master bathroom a few weeks later. I could ramble on about our experience in detail, but it is unnecessary because these guys were so good and that's all I need to say.

Cabinet and Stone, International was great. ?They provided me with ideas and options for replacing the kitchen cabinets. ?Their cabinets are of high quality and are beautiful. ?The granite is fantastic. ?Ron, the sales person and the coordinator of the project, kept everything moving on schedule. ?I was only without a kitchen for one week (as promised). ?The company has several different teams responsible for doing specific parts of the job, and it went like clockwork. ?All of the workers were polite and cleaned up after they were finished. ?I have two indoor cats that I always have to worry about when workers come to my house because most leave the door open so that they can get objects in and out of the house more efficiently. ?All of the workers who came to work on my kitchen were very careful about the door and the cats, even if it meant it was a bit inconvenient for them. ?I couldn't be more pleased with my kitchen and would highly recommend them to other people.

From design to installation, everything went well. Ron was pleasant to work with, and adjusted the drawings from original plan after going onsite to measure when the walls were taken down. The employees that installed the kitchen were neat and professional. Overall, I am really happy with the workmanship and design of my new kitchen/dining area.

Description of Work
Ron took the pictures I provided of my old, tiny kitchen and adjoining dining room, listened to my ideas for remodeling, then drew up a fantastic remodel. He was insightful, and offered ideas to make the room go from tight and boring to light and open. The cabinets I picked from his shop were cherry, solid wood, and well constructed. The granite, while simple, works well with the design. I had a small wine cooler that he had built into the overall design. Installation was done when scheduled.

It was excellent. They were the best people we worked with on this project. They were ontime and finished ontime. They cleaned up well. They were very professional, helpful, and friendly. I would definitely use them again.

Description of Work
They did new custom cabinets, and quartz countertops.

We specialize in tile floors ,shower ,and kitchen remodels. We are family owned and operated. Our goal is to give you the best experience possible as the best quality. Please reach out to us directly at 813-748-3328  …

We specialize in all custom cabinetry, kitchens, vanities, entertainment centers, fire places, bookcases, and other types of furniture. I do not use subcontractors. Email us at ronb330@tampabay.rr.com  …

Bonded
Insured
All statements concerning insurance, licenses, and bonds are informational only, and are self-reported. Since insurance, licenses and bonds can expire and can be cancelled, homeowners should always check such information for themselves.To find more licensing information for your state, visit our Find Licensing Requirements page.
General Information
Free Estimates
Yes, In our showroom
Eco-Friendly Accreditations
No
Payment Options
American Express, Check, Discover, MasterCard, Visa
Warranties
Yes

Cabinet & Stone International is currently rated 4.7 overall out of 5.

No, Cabinet & Stone International does not offer free project estimates.

No, Cabinet & Stone International does not offer eco-friendly accreditations.

Are there any services Cabinet & Stone International does not offer?