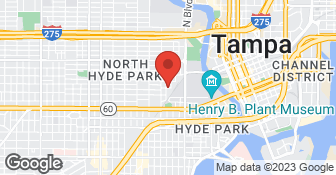 My awning had a great deal of green mold, etc., I never thought it could be cleaned. Looked like new after cleaning. Will use again!!

I actually called this company because I just wanted the Sunesta retractable awning to be removed as it was so filthy and mildewed, etc. The representative assured me they could make it as good as new. I was skeptic, but decided to give them a try. Since my patio etc, was also in need of a good cleaning, I included that also. I couldn't be happier. My awning looks fabulous!!! All the work done was excellent. No muss, no fuss!!! My patio has never looked better. A little pricier than I'm use to, but it was worth it to have the first class service. This company knows what they are doing!!! Highly recommend.

The experience started off badly from the beginning when I scheduled the appointment. When I called, the receptionist wanted to schedule my house on a day that I had an appointment. I told her that they would need to start at 8:30 am or I would schedule for a later date so that I could be home. She wanted to schedule for 9:30 am, but I told her we would need to do it at a later date. At that point she agreed to 8:30 am. Brian from Awnclean did not show up until 9:30 am. He said that no one told him about arriving at at 8:30. He said he completed the outside of the house, and I told him he would have to come back to clean the windows inside because I had to leave for my appointment. Awnclean never took responsibility for their scheduling error. I was told that they never schedule earlier than 9:30 am, and "IF" someone had done tha,t it should not have happened. "IF" implies I either made this up or made a mistake, Both implications are untrue. Brian returned to clean the inside windows. I thought he would also clean the driveway because it looked as if it had been overlooked. There were black splatters from where the pressure washing machine had been set up and the rest of the driveway did not look clean. I notified Awnclean that I was not satisfied with the driveway. I was told that it would be at least a couple of weeks before they would be back in the area to reclean the driveway. During the time they returned to clean the driveway, I was out of town for 2 weeks. On my return I observed that the splatters on the driveway from their machine were still there. The driveway did look better so I know they made an attempt. 8/26/13, i contacted Kenan Cano, Awnclean, by email and told him about the splatters still on the driveway. He denied that the splatters on the driveway were from their cleaning equipment. "Regarding the marks on the driveway Leslie those are just stains that are left from the oils and stuff that were sitting there before....Most of those stains are permanent stains that you cant see when driveway is black. Once it gets cleaned then you can see them." First of all, my driveway does not get black. The only things that drop on that part of the driveway are from a weeping elm tree and whatever they pressured washed off the roof. The only other object that was on that section of the driveway was their equipment. Nothing else can account for the splatters. 9/1/13, 2 months after the initial work was done, dirt and algae have washed off the roof onto the pool patio, the sidewalk is turning black with algae, a concrete patio outside the office area of the house was not washed at all, the stone walk way around the back and sides of the house was only washed in several areas, several areas were half washed and a full one fouth of the walkway was not touched by a pressure washer as it is green. I did not check the back of the house until I realized that Awnclean was not acting like the company i had grown to trust for the past 4 years. That is when I discovered the work that I paid for that was left undone and took pictures for documentation. Let me state here that my roof is not covered by trees. In closing, as I have used this company before, the work results that this report covers reflect a 180 degree turn around in the prior experiences I have had with Awnclean.

Description of Work
I have used Awnclean in the past and was always satisfied with their services until this last service. Awnclean was to pressure wash my tile roof, house, gutters, pool cage, pool patio, driveway, side walk, stone pathway around the back and side of the house, cement patio outside office, clean windows inside and out.

They were recommended to me by my window washing guy as I am the president for home association and we used them for our whole community not just personally. Their services have turned out very well so far. They met the expectations.

Description of Work
I used Awnclean Diversified Services about eight months ago. They cleaned and repaired awnings.

email initiated contact - prompt response from representative who quoted cost - used google earth to determine roof size - when i agreed to price, an appt was scheduled to do cleaning - the following week the two workers called ahead to let me know what time they would arrive - they arrived promptly - they reminded me to close windows - they quickly went to work - the roof after being cleaned with low pressure water and the green cleaning agent - there was no need to cover our outdoor plants = they then applied the protectant to the roof - even more amazing they cleaned up after thet were done

As I said above. They were very professional. Nice equipment and vehicles are clean there men were on time and seemed to know exactly what to do. They took very little breaks and I am amazed at how my home looks today. I would use them for any of my outside cleaning needs..

Description of Work
They came out and gave me a free bid then we came to an agreement on price they scheduled my work they came out on the first day of cleaning and were on time and very professional. They cleaned my 6500 square foot tile roof, 6 window awnings and 2000 square foot of concrete around my pool, driveway and sidewalks. They cleaned my gutters and it looks like new.

I saw an ad in the Home mag for "Green" roof cleaning that didn't use high pressure or harsh chemicals. I called and set up an appointment to meet with Kenan to go over work and get an estimate. He was on time and very nice. I did get estimates from two other companies. One was a no show and the other was comparable, actually a little less in cost then Go Green, but I just felt more confident with them. Kenan was very knowledgeable and the company has been in business for 20 years so I felt good that if something were to come up regarding the warranty they would be there for me to call. They called me on Friday to confirm the cleaning date and start time between 8-9am. We set set it up for Monday while I was at work. I did not have to be at home while they were working. On Sunday I prepared by bringing my porch plants inside, putting away bikes etc.. When I got home from work on Monday the job was done. Everything looked great. Not only did they do what I contracted them to do, but they also pressure cleaned the sidewalk that leads to my front door and stoop. There is nothing like leaving your house dirty and getting home and having it all clean. If I could only get my kids to do that. They left an invoice for me for the exact amount agreed upon. I called in and paid for it over the phone with a credit card. Very easy. It was a really uneventful experience. I would highly recommend this company to anyone in need of roof cleaning or any exterior cleaning.

Description of Work
Roof cleaning and treatment. Including a 2 year warranty on the return of any mold or mildew. They also pressure cleaned the exterior siding of my townhome. I live in a 2 story end unit and this included the front, back and one side wall.

we are specialists in pressure washing services for gutters, roof, dry-way, side-walk, screen pool, and others. we are characterized by quality, punctuality, responsibility and reasonable prices. We are a family business backed by 4 years of service. It will always be a pleasure to be able to clean your property.  …

PPW & Soft Wash Inc. is a certified soft wash company that is safe and environmentally friendly. We sanitize the exterior surfaces using a biodegradable cleaning solution to get rid of dirt and grime. It also kills mold, mildew, algae, fungus, and bacteria. PPW and Soft Wash Inc. is your solution for a variety of exterior cleaning services for your home and business. A certified professional service technician is ensured to arrive on time with the right equipment to maintain and restore your exterior surfaces. When you soft wash your exterior surfaces you will get a longer lifespan our of your paint and roof. We are licensed, insured, and certified. Why choose us: Licensed and insured Professional Equipment Top-grade cleaning agents Professional and certified soft wash company Certified technician 100% customer service satisfaction  …

Awnclean Diversified Services is currently rated 4.3 overall out of 5.

No, Awnclean Diversified Services does not offer a senior discount.