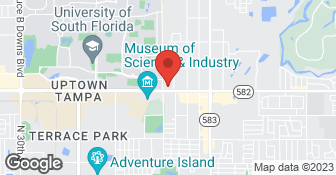 Excellent. I have used AdvantaClean annually for the last few years and have found them to be responsive and effective. I recommend AdvantaClean without reservation. donald l. mellman, md.

The AvantaClean technicians did a very careful cleaning of the AC system and made sure all surfaces in our property were protected while they did their work. They were very courteous and answered all of our questions. They also cleaned up after themselves, which I greatly appreciated. My husband and I would recommend AvantaClean Tampa to everyone. We are so pleased with the results.

Description of Work
We needed mold remediation after the last tenant moved out of our townhouse. I searched the web and found six companies that might solve our problem. Of these six, I chose AvantaClean and I’m glad I did. Brian Westmoreland and his team are highly skilled in the latest techniques of mold removal. His technicians did a thorough job of removing the mold from the air conditioning system and ducts.

AdvantaClean rep., Brian explained the process to us in detail. The AdvantaClean crew arrived as scheduled on time. The crew were professional & neat. A nice group of people. They made an un-pleasant situation as pleasant as it could be. The work was completed within the time frames they projected. We are happy we found them. Brian was also helpful in putting us in touch with a contractor to help with repairs. I would not hesitate to recommend them. I hope we don't have to, but would definitely use them again.

Description of Work
We needed treatment in one of our bedrooms.

Dealing with Brian at AdvantClean was a pleasure. The work was done professionally, and everyone we dealt with was courteous and great. I would recommend AdvantaClean of Tampa to anyone.

Brian was responsive in a timely manner and very professional.

We found black mold in our home and needed someone to come take a look ASAP. Brian came a little over an hour from when I called and was very thorough. He confirmed that what we saw looked like black mold and was booked that day but came a few days later and cleaned and sealed it all. He only removed the drywall that was necessary, and took pictures of everything so we could see for ourselves how bad it was. He was very thorough and was honest and up front before he started and spoke with us about pricing so we knew what to expect. He was kind and professional, I would definitely recommend him!

Description of Work
Cleaned the mold in our drywall

Description of Work
Came out to house to check for mold. Explained everything to us. And, took the time, so we really understood.

iWe were more than please with the service that Brian provided in our home this summer. He was extremely thorough, friendly, qualified and went way outside of the norm for taking care of our issue. In addition to getting rid of the mold, he took extra time to talk to the buyer of our home who had a lot of questions about how he was going to do the job. Then we found a small problem that was not his fault and he came back to take care of it without charging us for the second visit. Finally he took even more time to help out when it came time for an air quality test that was requested to make sure all of the mold was gone. I could not have asked for a better experience with this type of business. Especially after the first company that came out for an estimate presented a lot of unnecessary repairs and did not take the time to really look into our issue. Once Brian showed up we felt like everything was done with integrity and that can be tough in the scary business of mold remediation. Our experience was fantastic and I would recommend his company with the highest level of confidence.

Brian was great, he was referred to me by the guy who did the test for mold and was actually the third estimate that I had gotten about the work but was the only one that seemed to know what he was talking about. He was the only one that said that the real issue was just in the bedroom and with the air unit and that he didn't feel the entire condo needed to be sealed off and cleaned. He was also the only one that said the ducts were able to be cleaned as is, others had told me that they would have to be replaced. I appreciated his honesty and knew he would be the best choice for the work.We were able to schedule it quickly after that and I was only out of the house for a day while they did the work. They ended up not having to cut out around the window as much as they originally thought, that's where the most concentration of mold was. He also helped coordinate with the air company that came and cleaned the entire unit while they cleaned and disinfected the ducts. Everything went smooth and I can already tell a difference.He was very professional and courteous, I will definitely keep his card for any future issues.

Description of Work
Mold remediation in one room of the condo, cleaned and disinfected the air ducts and removed part of the contaminated area by a window in the room.

Specializing in removal of debris in Vent and wall air flow structure. We guarantee your satisfaction, and we won’t leave until the job is done right. We pride ourselves on the quality work we provide, while delivering great customer service! Check out all the services we offer below and call -or- click to schedule a free estimate today! Call us today at 727-328-7218!  …

Duct Depot LLC has more than 14 years experience of providing Florida with professional air duct, H-VAC, and dryer duct cleaning, along with many other services to help keep your air quality clean as can be to help the health of you, your family, and anyone who visits your property. We provide cleaning services to residential and commercial customers alike, so contact us today to service your home or business office.  …

How is AdvantaClean of Tampa overall rated?

AdvantaClean of Tampa is currently rated 5 overall out of 5.

What days are AdvantaClean of Tampa open?

AdvantaClean of Tampa is open:

What payment options does AdvantaClean of Tampa provide

Does AdvantaClean of Tampa offer a senior discount?

No, AdvantaClean of Tampa does not offer a senior discount.

Are warranties offered by AdvantaClean of Tampa?

No, AdvantaClean of Tampa does not offer warranties.

What services does AdvantaClean of Tampa offer?