Screen repair
Windows
Concrete Driveways
Decks and Porches
Fencing
Licensing
Bonded
Insured
All statements concerning insurance, licenses, and bonds are informational only, and are self-reported. Since insurance, licenses and bonds can expire and can be cancelled, homeowners should always check such information for themselves. To find more licensing information for your state, visit our Find Licensing Requirements page.
Business Details 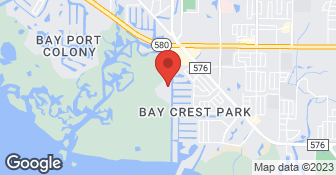 I have been in business in the Tampa Bay Area for 25 years, licensed and bonded in Hillsborough,Pinellas and Pasco counties as Admiral Screen & Aluminum. I specialize in Pool and Patio enclosures, screen, glass and vinyl rooms, concrete and star deck. I also install vinyl fencing. I do all of my own work and offer Senior citizen and military discounts. References are provided upon request....

Our team members have the training and experience required to deliver top-notch home remodeling services. We answer your calls promptly, show up on schedule for all jobs and get the job done to specification at the first attempt. That is why we provide lifetime warranties on labor for all our projects. This has enabled us to develop an excellent reputation within the communities where we offer our services. Now, you can also enjoy the same commitment, dedication, professionalism and customer care when you call on us for roofing, siding, windows or gutters! When upgrading your home exteriors, we understand there are two things are that are important, a perfect installation and price! Ridge Top Exteriors is happy to offer both to homeowners like you.

As a Florida state certified contractor we specialize in window and door sales and installations only! We do not offer window or door repair services. Choosing the right replacement windows or doors is just as important as choosing the right contractor. Whether it's hurricane impact resistant or new construction energy efficient only the highest-quality products are offered. Products that provide lifetime guarantees, little or no maintenance and energy savings are key. Choosing the right contractor is just as important as choosing the right material for your project. That’s why we not only expect you to get the best product but also the best installation service. Bozarth Contractors does not use any sub-contractors for installations. Our in-house professionally trained employees provide exceptional service and quality workmanship that our customers expect. Our goal is to make you comfortable and pleased with both our work and value of service.STATE CERTIFIED LICENSE #CBC1253999.

Clear-view Companies, Llc. is a full service remodeling, renovation and repair company that has become the go to in the greater Tampa Bay area for high quality craftsmanship adjusted to meet your specifications and needs, regardless of the extent of the work you need done. As a family-run business, we are committed to providing our clientele with more personalized services that make your bottom line our top priority. Without the cumbersome overhead costs associated with larger, less versatile remodeling companies, with Clear-view Companies, Llc. you can rest assured that more of your hard earned money goes into the work itself. Financing available. Award winning.

Never called back to schedule an appointment

Nick's quote was the lowest quote we received. We went forward with the project many months after the original quote and he stood by the original quote. He returned telephone calls rapidly and arrived each time when promised. The workers were very neat and meticulous. The Lanai looks better then we could have imagined. Fantastic workmanship. We highly recommend him. In fact one of my neighbors has...

They came in and did an excellent job on everything and cleaned up after themselves.  I was ecstatic about the walkway that he put in for me.  I would definitely use him again. I have been using him for years.

DESCRIPTION OF WORK
He came and dug up my old drive way and completey replace it. He also did my screened in back porch and put the windows in.  He put up my car port and put in a walkway from my back door.

I was very pleased with Nick Bellan and Admiral Screen and Aluminum. The finished product looks excellent, with good attention to detail evident and Nick did the work himself. He's a very genuine & friendly guy, whom I got along with very well. Since I was to be at work during the day when he was doing the repairs, it was a big relief to me to fine Nick to be such a decent guy & I trusted him with...

DESCRIPTION OF WORK
I have a sunroom on the back of my house which needed to have both the screens and tinted vinyl panels replaced. I had asked around at home repair centers for any leads on a contractor who did vinyl panel replacement, but no one knew of anyone. Angie's List to the rescue! The owner,Nick Bellan, came out & gave me an estimate for the replacement of screens & vinyl panels and also advised that he could replace broken door components as well, bringing everything up to an almost "like new" condition. The estimate given was $1,200, but the door components were more expensive than anticipated, but still not unreasonable. The final total cost was $1,286.