Flooring Sales and Installation
Fencing
Drywall
Decks and Porches
Countertops and Backsplashes
Concrete Pouring and Repair
Ceramic Tile
Unfinished Carpentry
Blind Cleaning
Licensing
Bonded
Insured
All statements concerning insurance, licenses, and bonds are informational only, and are self-reported. Since insurance, licenses and bonds can expire and can be cancelled, homeowners should always check such information for themselves. To find more licensing information for your state, visit our Find Licensing Requirements page.
Business Details 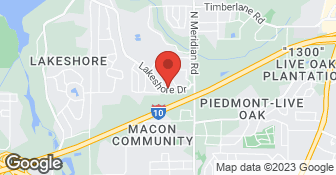 Commercial Maintenance Services (CMS) is a full-service facility maintenance and locksmithing company. We provide all types of businesses with cost-effective facilities management solutions, exceptional service and workmanship at reasonable prices. We use our network of highly qualified employees and contractors to perform a variety of maintenance and repair services. With more than 12 years of experience, customer satisfaction, confidentiality and security are our paramount goals. We understand the importance of constant communication and will work with you to gain a thorough understanding of your specific needs. Currently CMS offers services to north Florida and south Georgia with a focus on Tallahassee and its surrounding counties. We accept cash, checks, Visa, and Mastercard for payments. We also offer billing for our commercial accounts, with approved credit references. We are fully-licensed, insured and bonded in the services provided. We can provide references upon request. We look forward to working with you to solve all of your maintenance and locksmithing issues....

We strive to deliver excellence to our clients regardless of the size and scope of the project. America's 2019 Top 100 Roofing Contractor! Our business is built on hard work, integrity, and a personal commitment to you, the customer. Tadlock Roofing has provided quality service to the North Florida area for over 40 years. All of our work is personally guaranteed. We provide solutions to fit any roofing budget, and are your source for residential or commercial roofing needs from new construction to repairs, replacements, maintenance and insulation. We specialize in low slope and steep slope roofing systems. All of our work includes the very best manufacturer-certified warranties with up to 50 year non-prorated system coverage. Clay tile roofing install and service subject to location. For questions specific to clay tile roofing, contact our offices or send us a message on Angie's List.

We've been serving North Florida and South Georgia for over (29) years. We currently employ (85) full time people and have employed as many as (135). We offer a 10% Senior Citizen discount for all Electrical Services.

Tim Reed did not fix the leaking problem.  He never showed up on time, did not come back to fix the problem timely or returned my calls/emails timely.   Be sure to use credit cards if you want to hire this person for anything, never pay by check or cash!

DESCRIPTION OF WORK
Called Tim Reed for roof leak repair because the builder did not install the flashing in the front of the house when the house was built.  Tim confidently said he can install the flashing & will stop the leak.  Tim even claimed that he is a general contractor who repaired lots of roof leak, even can change the entire roof. Tim will give me life-time warranty on his work. The most important reason I hired Tim is that he was only one willing to work on Sunday & I have a super busy schedule.  I was told that he would be at my house befoer 8am, but he did not show up until 11:30am. did not start to work on the project until 2:00pm.. Tim did stop the leaking from the area needed flashing, but he caused the new leak from the area he put down the new shingles. I called Tim to come back to take care of it next day.  He did not answer the phone, emailed him as well, he replied saying he would be back next day 8am.. but he did not show up until late PM.  he said that fixed it second time.  But he did not. called him agin...Since he never showed  up on time, I simply just left my garage door open for him & hopefully he would show up. He finally went back after a week.. but after 3 trips, he still has not fixed the leak.  I called him & left serveral msg, emailed him many times, he did not reply nor showed up to fix the problem which he was paid.  Finally got an email from him saying he is in Virginia, won't be back until late Aug.  I told him I want my money  back because he did not fix my leak, never heard from him.   A professional roofer with more than 30 years experience told me Tim did not lay the shingles right, that's why he caused the new leak when he tried to fix the original leak.