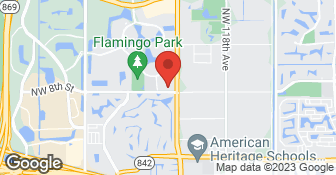 An overall terrible customer service experience. First the technicians showed up literally at the very end of the three hour service window that was provided (without any phone call that they were on their way). When they finally arrived they were in a rush and showed minimal care for my dryer, moving it around in a rough manner (and actually causing damage to it that I am now in the process of getting repaired). And after all of this aggravation they didn’t even resolve the issue I hired them to fix... a condensation buildup issue in the dryer. Also apparently this company doesn’t care about post-service follow up as I called and left a voice mail message requesting to discuss these concerns with a manager shortly after the service appointment and they never called back.

WRONG COMPANY! Dear Sir, please REMOVE this review. You never had an appointment scheduled with us. Any questions feel free to call us at 954-461-0693. Thank you.
4.0

Arrived on time. Worked quickly and efficiently. Cleaned vent from inside and also went up on roof of 2 story home to clear vent from outside. Very polite and professional. Will use again next year.

Everything was well performed. I was very pleased with his service.

it went great. i had used them before and i would use them again.

The serviceman was very professional and helpful. There was a follow-up email sent after scheduling the appointment. We waited only a few days for an appointment and they followed up by phone to confirm. They were early and we were very pleased with the result. They found that the dryer wasn't vented to the outside and he placed a new vent to fix the problem. It was $125 for the cleaning and an extra $30 for the added vent.

Arrived on time and took care of problem without any difficulties'

Description of Work
Cleaned my dryer vent . I now have a dryer that works with one cycle.

spoke with Carol very pleasant and up front about the charges. came out promptly the next day. Dryer working great after the service was done.

Description of Work
dryer vent and inside of dryer cleaning.

Description of Work
Clean the vent for the dryer

Perfect. Even assisted with a troubled vent.

arrived on time and did the job quickly. Left without properly reconnecting the dryer vent hose. When ai noticed it I called them and they were very rude and wanted to charge me to come back out

***MEMBER REVIEW INCLUDES FALSE STATEMENTS*** We did a dryer vent cleaning for this individual on July 28, 2016. On November 19, 2016 (almost four months later) he called and said the dryer hose got disconnected. We scheduled a service call and told him we would charge him $55 instead of our standard charge of $99 since he just used us a few months prior. He then called and cancelled because 'he did not want to pay anything for service'.
1.0

Not well at all. The usual guy that comes out to clean my vents called to say he was 10 minutes away. I was in a meeting and stepped out to take the call, but missed him. I immediately hit redial and called him back. he did not answer so I texted him and told him someone was at the house and I had called the gate. I texted that I needed the dryer vent moved and to clean the vents. I also texted that to my cleaning lady so he would know what needed to be done. When he came she tried to show him my text, but he said, I'll look at that later. My husband was there and he told him that the job would be $350 to move the vent and $99 to clean the vent. My husband said, "She needs it done, do whatever needs to be done" he then said I need approval to do the work and we need to get paid. He said, "do not worry about the payment, have you not been paid before when you have done work for us?" He apparently felt as insulted as I do by the question. This was according to my cleaning lady and my husband. He again tried to call me and again, since I was in a meeting I immediately tried to return the call. He has never answered his phone. I also texted him and asked him to call me. He did not. Since I was texting him, he obviously could have texted me the estimate and he would have had my approval to do the work. He did not do that either. He left and I made repeated calls to office to try to find out what was happening. I left my meeting and drove home to find him gone and no one answering my calls. This gentlemen is like dealing with the drivers license bureau. He does good work, but is rude. We have always tolerated his rudeness, because the job is done right, however I will not be using them again. the issue I have with this process is, the office lady knew exactly the scope of the job. It was not a repair, but a standard changing of the vent from the rear location to the side. They should have had an idea of the cost from when I set the appointment. They have been to my house and he is the one that set up the venting system in my home, so this should not have been an unfamiliar job for them. They have done work for us and have always been paid, but they treated us like they had never done work for us and did not know if they would be paid. I am a loyalty type client. I have even given them good reviews. They seem to have no idea that I have given them good reviews and do not seem to care that I was a loyal customer. I am a business owner and loyal, repeat customers are hard to come by. This guy had difficulty communicating with not just one person but two. My cleaning lady told me he seemed to be frustrated with the job and clearly did not want to do it. Not sure if he was having a bad day, but he took it out on us. Now I'm without a dryer and due to the hurricane I am the end of everyone else's appointment calendar. I shouldn't have to worry if the repair guy is in a good mood and I should not have to be there in person when there are two people there to communicate.

Our technician went to the house, he quoted the job, the person home authorized work but did not want to take on responsibility of payment so the tech moved on to the next customer.
5.0

My clothes dryer duct needed to be repaired. They ended up replacing most of the duct work because it was crushed in some places in the attic. They did an excellent job. Everything was left clean when they were finished. It's like I have a brand new dryer again. And Carol, she coordinates the scheduling, couldn't be any nicer. I would definitely use this company again and I highly recommend them. In fact, I plan to hire them once a year to clean the ducts for maintenance.

Description of Work
None. I wanted to use this company however they would only give me a 90 minute or greater time window. That made no sense sense I wanted the first appointment. In order to give me a specific appointment they wanted to charge 50% more. This is great for people who aren't busy and do not have much of a life. For busy people it is not except a bowl.

The technician arrived on time, was friendly, and completed the work in a very short time.

Description of Work
I needed my dryer exhaust cleaned and the exhaust tubing replaced.

They had to go into the attic but they were successful in using their camera and tools.

Description of Work
Duct cleaning and retrieval of items stuck in ductwork.

The technician was friendly, prompt and communicative. They found water in the dryer vent line. It cost an extra $45 due to the presence of water. The extra charge was a bummer, but we were very happy with the service overall and have recommended them to a few family members already.

This was an awful experience I hope to never have again.

Description of Work
I paid this company to install a flap on my dryer vent. They never did it. I found out because when the problem the flap was supposed to fix continued, I called another company in and they said there was no flap. (I had called back this company after the flap was supposed to have been installed to tell them it wasn't helping and they wanted to install a second flap!! Fortunately, I said no and found another company!) This company insists a flap was installed and has not offered anything, not even to come out and look for themselves.

Perfect - he came on time, did the work expected, left things clean.

Spoke to Carol who was very professional and she said a tech Rudolpho was in our neighborhood. He arrived within an hour and was very detailed and professional. Thanks Angie's list for the recommendation

Description of Work
Our dryer was not drying the clothes in a timely manner and knew the vents were clogged.

At Chaar Cooling our mission is to provide our customers with exceptional workmanship, excellent customer service, and extraordinary professionalism. Locally owned and operated, we are backed with years of experience. We will seek to provide these services within an appropriate time frame as a result of our focused approach and quality professional service.  …

We specialize in HVAC system installation. We operate in all of South Florida. We work with the P.A.C.E. program that allows homeowners to get high efficiency upgrades to their homes. Once a homeowner is approved, they will have a 0 down and no payments up to 20 months. This is not based on credit so you may have good credit, bad credit it doesn't matter. We have over 40 years of experience. We care for our customers and always offer warranties on the job performed.  …

No, Aaron Dryer Vents & Air Conditioning does not offer a senior discount.

Are there any services Aaron Dryer Vents & Air Conditioning does not offer?