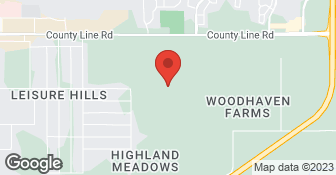 I would hire him again, but he is very selective to the work he will do. He was good for the more intricate projects. I've used him about 5 times. The price was for all the work. He did a good job on the projects he did.

Description of Work
He did some interior woodworking, installed an exhaust vent to my a/c, and did some plumbing.

Christopher was on time for the appointment for an estimate. I showed him the work that need to be done. I then asked him for an estimate, he seemed a little surprised that I wanted something in writing. At which time he proceeded to his vehicle and wrote some figures on an index card, and estimated the job would cost $500. I asked what that would entail and he said labor no materials. I asked what that meant and that I would want something in writing to include the amount of time that job would take and a start date. He could not give me an estimate on how long the job would take, but he was charging by the hour nor could he give a firm start date. I realized at this point the estimate was for only half the job I needed done and he would pick up the supplies and charge me for the supplies at more than his cost, I felt the bill was not going to reflect the index card estimate. I thanked him for his time, but will not be calling him in the future.

Description of Work
No work was done.

Nice guy, but a little creepy.

Description of Work
List of several small items to fix.

HE IS ALWAYS EXCELLENT AND ALWAYS SMART ABOUT EACH JOB.

Description of Work
HE REWORKED THE SLIDING DOORS TO MAKE THEM WORK.

MR. KOCH IS METICULOUS, PLEASANT AND PROMPT. HIS WORK IS GREAT. HIS PRICE IS RIGHT!

HE TOLD MY HUSBAND THAT HE WAS BOOKED FOR THREE WEEKS BUT WOULD CALL HIM IN THREE WEEKS OR SOONER IF HE HAD A CANCELLATION AND WE NEVER HEARD FROM HIM AT ALL AND IT HAS BEEN AT LEAST 5 OR 6 WEEKS SINCE WE CONTACTED HIM.

Description of Work
NEEDED SOME WORK DONE ON OUR RESIDENCE AND FOR OUR RENTAL HOME.

HE WAS COURTEOUS AND PUNCTUAL.

Description of Work
HE DID NOT PERFORM ANYTHING DUE TO NOT BEING ABLE TO PERFORM THE WORK I NEEDED DONE. HE DID FIX A DOOR THAT WAS NOT OPENING PROPERLY AND DID NOT CHARGE ME.

CHRIS WAS ON TIME, VERY POLITE AND REASONABLY PRICED. HIS WORK WAS VERY NEAT.

Description of Work
REPLACED LOWER GROUTING IN SHOWER STALL AND GROUTING AROUND TUB AND SINK CABINET.

HE CHARGES $12/HR, EXCELLENT WORK. THE ONLY THING IS HE MAY NOT BE ABLE TO DO SOME JOBS, HE WILL ASK BEFORE HE DECIDES WHETHER HE CAN DO IT OR NOT. HE IS A REAL FIND, EXCEPTIONAL WORK AT A FAIR PRICE.

Description of Work
HE DID A NUMBER OF HANDYMAN JOBS; EXTERIOR PAINTING, HE SCRAPED AND PRIMED, HE HUNG FOLDING DOORS , ASSEMBLED A CLOSET ORGANIZER AND DID SOME INTERIOR PAINTING.

MR. KOCH SPENT MUCH EXTRA TIME CLEANING UP THE DEBRIS LEFT AFTER REMOVAL OF THE DOOR. ALSO CLEANED UP THE MARBLE LEDGE. HE GAVE ME THE OPTION OF DISPOSING OF THE DOORS TO REDUCE THE PRICE OF THE JOB. MR. KOCH WAS PLEASANT,NEAT AND VERY CONSCIENTIOUS ABOUT HIS WORK. HE TOLD ME THAT HE MAKES EVERY ATTEMPT NOT TO PRICE GOUGE CUSTOMERS AND WAS WILLING TO NEGOTIATE. I WOULD RECOMMEND MR. KOCH HIGHLY. HE CAN ALSO PROVIDE PROFESSIONAL LANDSCAPING SERVICES AS WELL AS HANDYMAN HELP. LOCATED IN HOLIDAY AREA

Description of Work
REMOVED SHOWER DOORS FROM THEIR TRACK ON A MARBLE RIM AND DISPOSED OF THE DOORS.

Aire Solutions, Inc., specializes in providing high quality HVAC systems, services and repairs at a competitive price; along with delivering exceptional customer service. Our associates are always ready to solve our customers air conditioning problem in a quick efficient manner. If one of our technicians are installing a New, 16 SEER, High Efficiency AC System or even if they are finding a Freon leak in your evaporator coil you can be 100% positive they are paying attention to the details. As a company, our attention to detail is like none other. We ask a lot of questions so we thoroughly understand your heating and cooling needs, as well as, understand any problems with your current HVAC system. With our continuous dedication to customer satisfaction, we are considered one of the BEST in the HVAC industry, and it shows as we have A+ rating with the Better Business Bureau.  …

Watershed Plumbing Services promise is to provide 100% customer satisfaction no matter what the service or project requires. We know that by providing the best in customer service and technical training to our plumbers, you get the best product, which makes us the best choice for all your plumbing needs. Watershed provides Wesley Chapel with Plumbing Services with upfront pricing, friendly and knowledgeable plumbing contractors who will arrive at your door on time, clean, and work carefully and efficiently on your home’s plumbing so you can get back to your routine with the least amount of disruption possible.  …

From remodeling your bathroom to unclogging your drain lines, JohnSmith Plumbing Inc. does it all. You can rest assured that your local plumber has the experience and equipment needed to tackle all kinds of plumbing projects. Once you let us know what you need, we'll form a plan to solve your plumbing issues and help you run a safer, more efficient home.  …

How is CHRISTOPHER KOCH overall rated?

CHRISTOPHER KOCH is currently rated 4.7 overall out of 5.

No, CHRISTOPHER KOCH does not offer eco-friendly accreditations.