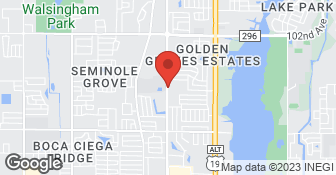 OWNER OPERATED. NO SUBS. COST IS DETERMINED BY THE JOB. NO TRAVEL CHARGES. NO SERVICE FEES. MAY CONTACT THROUGH EMAIL. ...

Hours available to accommodate your needs.  …

Premium Painters has been in business for 20+ years, and has become one of Florida's largest residential and commercial painting companies. With 2 offices serving the Tampa Bay area, there is always a Premium Painter near you. We are known for having "Larger Crews to get the Job Done Fast!" Our lead times to begin projects are much shorter than our competitors. So if you need a project completed on short notice, we have you covered! Call today for a Free Estimate.  …

He was very good. The job went very well and I didn't have any problem. I would definitely recommend him. He did a good job and he came on time.

Description of Work
I used Dale Ford for tile work.

I have used him before. The last job turned out very well. He is very good and I really like him. I do like his services as well. His price is very reasonable. The quality of his work, responsiveness, punctuality and professionalism are all very good. I would use his services in the future too. In fact, I talked to him today to get some work done, but I haven?t got his estimate yet. He said that he would give me the estimate by tomorrow. He is a very good worker and he is very loyal. He is on time and his work is good too.

Description of Work
I used the services of Dale Ford about 3 to 4 months ago for installing the floor in the kitchen.

He is very good. There isn’t anything that I disliked. He was professional. He was neat in appearance. He did what he said he was going to do. Whatever he did for me was very good. I wanted to change out some lights. He did what I needed to have done. I found out that he is not a licensed electrician. He is licensed to do repairs and things like that. He does anything and he did replace the lock and did some work on my front door. I live in an apartment complex and everything around here is very difficult. He did a good job. He is very knowledgeable about anything. He changed light fixtures for me, installed a new shower head for me. Whatever he doesn’t know about, he has a lot of friends that he calls them to find out. I had him change out a UV thing in my air conditioning and we never had done that before. I liked him. I think he is very good. It is very difficult for me to rate him on the price as I don’t have anything to compare it to. I tried to get a sense of how much he was charging me hourly maybe and I think he probably charged me about $25 an hour or maybe a little more. I think his price is reasonable. I have had him do so many things and I have had him chasing after parts and tools and things like that. He had to go and purchase 8 foot long fluorescent lights that I could not manage. I have not used anybody for electrical work for long and I don’t know what the going rates are. I know that they have to be expensive because everything else is, nothing is cheap out there and I understand that. I don’t want cheap but I want fair. The quality of his work is excellent. I could look at him and say that he was meticulous - the way he dressed, the way his appearance was and his work was the same. His responsiveness has been good so far. I have just dealt with him a couple of times. His punctuality is good but there was one time he was supposed to be here at a certain time and he wasn’t. He was here an hour later. He set the time, I didn’t. He was very professional. He couldn’t have been any nicer. I am happy to have found him because he would do anything like carpets. He does my tile, flooring. He built homes. I was happy that I called him because he took care of my needs. He is a busy guy. He is also getting ready to tell me to do a home addition. I would recommend him and would use him in the future.

Description of Work
I used the services of Dale Ford.

Its difficult to find an individual that is trustworthy and can do it all. Dales works by himself so the size of the project may be a factor in how big a job he would undertake. He is truly a "jack of all trades". You can trust him to work in your home while your gone. He is neat and fast. The only downside is that he is not cheap. I would say that he is about 1/3 more expensive than other people that I talked with. His price is labor plus materials. He gives you a firm price on the labor and an estimate on the materials. I have a background in the building business and can tell you that he is well organized and goes about his business very efficiently. I was impressed enough to submit this report.