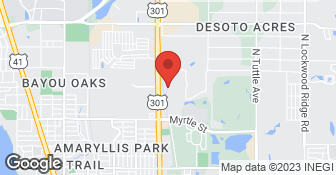 Professional Plumbing & Design has been offering Residential and Commercial Plumbing services to Sarasota and the surrounding areas including Bradenton, Palmetto, and Venice for over 25 years. From a simple faucet repair to more complex sewer and drainage issues, Professional Plumbing & Design can handle any plumbing job, large or small and, if something unexpected happens in the middle of the night, you can count on us to resolve your plumbing emergency, promptly and professionally. Our phones are staffed 24 hours a day, seven days a week so you never speak to an answering machine or voicemail. We offer clean, fast, and guaranteed same day service plumbing repairs. We also have 24 hour emergency service since plumbing problems can happen at any time of day, and usually at very inconvenient times. We are licensed, bonded, and insured plumbing contractors and we specialize in a full range of plumbing services including water heater repair and replacement, jet drain cleaning, video inspection, leak detection, and re-piping. Professional Plumbing & Design would like to be your plumber of choice! We are so certain that you will be satisfied with the services performed by our team that we stand behind all work performed with a 100% Satisfaction Guarantee. If you are unhappy for any reason, we will re-do your plumbing repair for free!...

Description of Work
plumbing for kitchen and bathroom

Excellent! A very competent and nice young man, Ben came out and checked everything with all the toilets and mixed our problem.. I would definitely use again and refer this company!

We've had Professional Plumbing and Design to our home for three different projects and we've received first class service every time. Yesterday JJ and Sam replaced our three toilets. They did a beautiful job, especially with the caulk, and left the bathrooms looking clean and new. A few months ago JJ was here to clear our blocked kitchen drain. He had our drain flowing in no time. He also found leaks coming from our sink disposal unit and we asked him to remove it, which he did, and he did a very nice job re-working the dual sink drain lines and dishwasher connection. Our first project was to have our hot water heater replaced along with the water main shut-off valve and two exterior hose bibs. JJ and Steven did an excellent job plumbing in the new water heater and replacing the old, leaking valves. We highly recommend Professional Plumbing and Design. Their experience and craftmanship is on display in the first class work they do. We are very confident when calling them to handle our plumbing projects.

HIGH QUALITY WORK...EXCEPTIONAL CUSTOMER SERVICE....REASONABLE PRICING. We've now had two experiences with Pro Plumbing Design. The first was an emergency repair of a main water valve (argh!) and the second was maintenance required by our condo association after an annual plumbing inspection. Ben did the work both times. He was great - very knowledgable, professional and honest. We will definitely use Pro Plumbing Designs in the future, especially now that we're Pro Plan members - what a great deal!

JJ, the plumber was prompt,courteous, and very professional. His charges were reasonable, and stayed until his work was done, even though he did not finish until after 6:00. He was excellent, I would recommend him without hesitation.

Description of Work
We recently purchased a condo that needed plumbing work. We had to replace the faucets in both bathrooms, the shower diverter in both, and installing a new water heater. We had to reroute the waterline for the refrigerator, and redo all the water feeds under the kitchen sink.

These guys are pros. After several years of dealing with roots plugging up the pipes under the floors, called these guys. I wish I would have used them when problems first arose. Live and learn. They jetted, and suggested relining the pipes without tearing up the floors (which other plumbers had recommended). Went with the relining option, and while not cheap, was way cheaper than tearing up the floors. After researching pipe relining, and finding good and bad experiences, came to the conclusion it is a great option - but only if the plumbers are experienced at this, and know what they are doing. These guys are. Looking forward to years of no sewer drain issues! Props to Raul, Jeff, Tony, Nick.

Description of Work
Sewer pipes under house jetted and relined

According to plan; required a full day and two separate points of access to mill both sides of house drain pipes due to underground layout. Jose was thorough and gave me updates throughout the process and explained everything that he was going to do and why. The photos show the “before” and the progress made. Unfortunately I did not take an “after” shot, but it was a huge improvement and we were happy we had the work done.

Description of Work
Hydro flushing and line milling of cast iron drain piping throughout underground area of home to remove the built up corrosion and restore free-flow of water.

Great, ran line around planting area and under concrete sidewalk.

I am very satisfied. I couldn't be more satisfied. They take a camera down. They re-fixed the clean out. They searched all the pipes to see how badly they were eroded. They use the latest equipment. They have a BBB rating of A+. The most important thing is they re-lined the pipes with PVC piping. They did not have to tear up any floors. This is the newest method and it saves a lot of money. Besides doing the outside relining, they also reroute the water lines so they go above in the attic area.. They have excellent technicians with years of experience.

Description of Work
They relined my sewer pipes.

Mike did a great job, and I will hire this company again.

Description of Work
Mike was on time, professional, and knowledgeable.

Veteran Owned & Operated. Serving the State of Florida. No Sub-Contractors Used. We care enough to answer our phones! Give us a CALL, We offer... 100% SATISFACTION GUARANTEED! We stand behind our company and the products we use. If you're not completely satisfied; we will come back as many times as necessary until you're happy and you remain happy at no extra charge to you.  …

Sarasota County area water heating expert! 25+ years experience! We supply contractor grade to the consumer at a great price! Most knowledgeable person in electric, gas, natural gas and tankless and solar too! Did I mention we are ALL knowledgeable on all things sewer and drain cleaning! Our motto “No drain left unclogged “ will prove helpful in your time of need! We come out 24/7 to solve your problem!  …

How is PROFESSIONAL PLUMBING AND DESIGN INC overall rated?

PROFESSIONAL PLUMBING AND DESIGN INC is currently rated 4.8 overall out of 5.

What days are PROFESSIONAL PLUMBING AND DESIGN INC open?

What payment options does PROFESSIONAL PLUMBING AND DESIGN INC provide

No, PROFESSIONAL PLUMBING AND DESIGN INC does not offer free project estimates.

Does PROFESSIONAL PLUMBING AND DESIGN INC offer a senior discount?

Are warranties offered by PROFESSIONAL PLUMBING AND DESIGN INC?

No, PROFESSIONAL PLUMBING AND DESIGN INC does not offer warranties.

What services does PROFESSIONAL PLUMBING AND DESIGN INC offer?