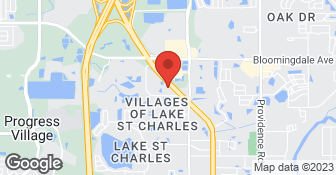 Description of Work
I had wood put down. A had carpet in my rental unit ! Very pleased with the detail

They gave us a great price on carpet! They arrived on time with tools. It was completed with no errors ! Outstading My wife was happy ! Thats what matters lol

They were very detail in their work I was please ! I thought the cost was fair . You get what u pay for. The wood floor look immaculate . They did it in a timely manner

Description of Work
Replaced carpet in three rooms. Didn't replace any carpet tack strips even though mine were 20 years old claiming it didn't need it. I will assume that's true but will be calling them if any carpet pulls up.

We were under a time crunch to redo the floors in a home we purchased. They started almost immediately after we closed on the house to help us move in sooner. They were very accommodating to our needs and did an excellent job. The workers were very professional. I would highly recommend this company to anyone.

Description of Work
Installed porcelain tile and carpet throughout the house.

They are very knowledgable and very helpful

nothing more to tell

Description of Work
I called Brandon Tile for an estimate as best possible over the phn and got between $500-600 for ceramic tile install for a 10 X 10 rm..carpet removal etc...lowest price tile was like $1.59. It would be 4 face to face meetings...Can't pick out tile at their web site..Because it's just a room for pets I need to get the cost down, can I buy my tile at home depot they have a sale $.78 / tile 18" square? She said yes we would still need to make sure of our costs for labor/supplies by a hands on estimate.She stated she was concerned over quality of tile and poor tile could warp and not last long.But then she said if Home Depot sells it it would probably be okay....Then she said if you want to but Home depot tile then why don't you have them install it? I hung up then..I was pressed for time.. I'm not saying it's a bad business or terrible service but the lady is a terrible sales person..I have a house and want my porch paved and some other rooms floors done later on for people living purposes... I could have been a great future customer If they want to call me hm # 813-319-3677...I live around the corner

I was in the market to replace the carpet in 2 rooms of my house. The store from the outside does not look very impressive but the inside was loaded with a variety of flooring. As I was looking at the different carpet samples, one thing I really liked was that the price listed per Sq Ft included pad and installation. I went with a thicker pad that was only about a dime extra per Sq Ft which was a good deal. My wife picked out the carpet she wanted and they came out for measuements and to give us a final price. We paid half up front so they could order the carpet and asked for a couple weeks in delay for installation as we needed to do some repairs and repaint one of the bedrooms. After a couple of weeks, we called to get the installation scheduled. They wanted to use 12' width carpet but when we called, they didn't have it. I thought that is what the initial payment was for. They did have the carpet in 15' width and there was about a 2 week backorder on the 12' carpet. We had some new furniture arriving so we went with the 15' width carpet which I couldn't tell a difference in. During scheduling, I was told that the installers had a job before mine that would take 2 or 3 days. I was told that they would get back with me to firm up the installation time. At the end of the 2nd day of the previous job, I had to call them to find out that they would be out to the house the next morning. If I had not called, I wouldn't have known they were coming until I heard the knock on the door. The installers arrived right on time and got to work. They were not employees of Brandon Tile but they do a lot of work for them. They are still subs though by definition. During installation, where the carpet was going next to some wood flooring, the wood cover between the two came off in one room. The installer started telling me how to repair it but I insisted that they do it as they caused the minor damage. The installer did and you can not tell anything had happened to it. After they were done is when I was most disappointed. The installation was fine but they left a mess on the wood floors leading to the bedrooms. I also had to do some touch up paint work in the newly painted room. I expected a few marks down by the baseboard but found long black marks or dirty handprints 2-5 feet above the floor. It showed that they were in a hurry and were not that careful during installation. It took about 2 hours to clean the floors and do the touch-up painting. Overall, I was very happy with the carpet, how it looked and the price. The entire installation situation brought the grade down a level as that is part of the process. As a previous report stated, I too was not all that happy with the installation and would possibly look elsewhere for that service in the future.

Robert and Norma B.

They're very eager to please. They were very accommodating.

Description of Work
We picked out the tile from Brandon Tile for our flooring.

We are a family owned business that takes pride in our work. We specialize in; vinyl plank, laminate, engineered hardwood, lvp etc. We also provide installation of proper trim; baseboard, quarter round, shoe molding and transitions. Estimates are done at no cost and can provide accurate measurements of square footage and linear footage for your project.  …

Bonded
Insured
All statements concerning insurance, licenses, and bonds are informational only, and are self-reported. Since insurance, licenses and bonds can expire and can be cancelled, homeowners should always check such information for themselves.To find more licensing information for your state, visit our Find Licensing Requirements page.
General Information
Free Estimates
Yes
Eco-Friendly Accreditations
No
Payment Options
Visa, MasterCard, Discover, Check, Financing Available
Warranties
No

BRANDON TILE & CARPET is currently rated 4.5 overall out of 5.

No, BRANDON TILE & CARPET does not offer eco-friendly accreditations.

No, BRANDON TILE & CARPET does not offer warranties.