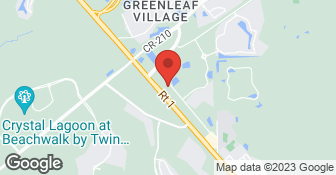 Griffin Service is instant aspirin for all your A/C & Plumbing headaches. We specialize in residential service & replacement, including Heating & Air, Water Heaters, Complete Re-Pipes, Drain Cleaning, Sewers/Drains, Duct Cleaning, Complete Re-Ducts, and more. We guarantee your satisfaction 100% on all transactions. We Fix What Others Can't....

Adequate job. Fixed pricing high. Should have prepaid to save $$ learning experience I guess

I had this company install a new hot water heater and then called them back to install a new bladder tank to a bill of $$ 3,000 $$. One year later the exact issue (water pressure and NOW... complete shut off) I supposedly had them fix is now WORSE than before they replaced a bunch of things that apparently did not NEED TO BE REPLACED!! It was simply a blocked water line from my pumps pressure valve. SO after calling them back out a few days ago and describing the issue(s) the "tech" was scheduled out on a Wednesday. I got his picture text to me, my wife got a call announcing he was in route,, we kept someone home to meet him, we get home from work and HE NEVER SHOWED!! THEN.....we call again the next day and he again is sent out with a trainee. I was told i would be billed 69.00 for the service call but that 69.00 would be deducted from any needed repairs. He was at my home for just over an hour. What he actually did other than turn on and off the water in the sink... we have no idea. He did cut the line between the pump and pressure gauge and left it laying on the ground. This BTW... now LEAKS!! He then told my wife it would 150.00, effectively twice what i was told. When i learned of this THAT NIGHT after coming home from work, I called immediately well before 6pm. I was advised that NO manager could be reached but was reassured several times someone would follow up the next AM. This NEVER HAPPENED! If i could i would rate this company in the negatives. In todays world, with expenses what they are, paying these kind of rates, customer services is a must. In the end I called to simply to get an INVOCIE as I NEVER got one. I over heard in the back ground a co worker call my wife and I "a bunch of A__ Holes... not once but TWICE!! The card got charged for certain but an actual itemized work invoice... still NONE! Stay FAR away! Far too many plumbing service companies out there. Certainly for that this clown show of a company charges!!! This is by far the WORST consumer experience i have experienced in my 55 years!

Everything was great with their service. Very professional and good communication.

Amazing! I wish every company was as dependable, trustworthy, and competent as Griffin. One of the best, if not THE best companies I have ever worked with. I've referred them to countless neighbors, who have all thanked me for the introduction. I can't think of using anyone else.

Griffin is a great company. They are super professional and always go the extra mile for their customers. As a general contractor myself I have dealt with a lot of other contractors and these guys stand above the rest.

They were really helpful explaining the process and what we would expect. After our repair the technician showed us the repair was done correctly. I would use Griffin again, top-notch company.

Great service. Will hire again to do any type of plumbing or Hvac

Awesome. The Griffin team actually showed up on time after a a few no shows from other companies. Both the plumbers and ac techs had me up and running in no time. Great experience.

Griffin service provides the plausible solution to any aspect of your home heating and air system. Do not look elsewhere and waste your time, your money and any worry. Do it right the first time and be done with it. Satisfaction guaranteed Ignore the platitudinous advertising from the others and choose the “very best”. Loyal Customers Stan & Gail

How is Griffin Service overall rated?

Griffin Service is currently rated 4.9 overall out of 5.

What days are Griffin Service open?

No, Griffin Service does not offer eco-friendly accreditations.

No, Griffin Service does not offer a senior discount.

Are warranties offered by Griffin Service?

What services does Griffin Service offer?

Are there any services Griffin Service does not offer?