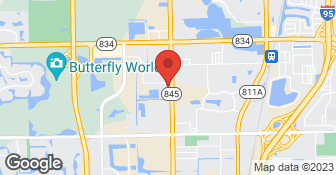 Locally owned and operated since 2008 with 15 years combined experience. Our 24 hour emergency service has a 30 minute response time. We offer free inspections and bill your insurance directly. We do not collect insurance policy deductibles. We serve all residential, commercial and industrial locations....

Koolsource is your air duct cleaning and insulation specialist. With 15 years experience in the industry, we started Koolsource to provide the highest quality yet affordable air duct cleaning and insulation services to our local Broward County community. We guarantee your satisfaction on every job! We take great pride in our experience, expertise, quality and customer service that we provide to meet the consumer's needs in South FL. It is our mission to provide excellent service!

Fire/Pipe Break, Wind/Toilet Overflow, Water Damage, Lightning, Vandalism. IICRC Certified Technicians. We bill your Insurance Company with no out of pocket expense for you. 24/7 Emergency Response!. We pay your deductable, Call Now Toll Free 866-931-1856 (some conditions may apply). The refund on services is not a direct discount on your deductible, but a refund from Emergency Express Restoration for the services provided. This incentive is only offered in areas where it is lawful. Certified Technicians, High-tech Equipment, 45 Minutes Response Time, 24/7 Emergency Service, Insurance Approved, Direct Insurance Billing, Fast & Affordable. We will work with you if you have no insurance coverage. BEST possible rates guaranteed!!

Stella Restoration LLC is a fully licensed, certified, and insured Florida restoration company providing residential and commercial services you can trust. We have over 10 years’ experience assisting home and business owners to recover from damages caused by natural disasters, water, mold, fire and more. Regardless of the type of damage, our team of experts deploys state of the art tools, effective solutions and total project management to ensure that your residential or commercial structure is restored to original or better condition than prior to the disaster event.

Reassured us many times that it was fully covered by home owners insurance; they checked and double checked to make sure. Placed a dehumidifier in home for 2 nights which accomplished nothing. I'm not even sure if it was functional, just a fan. Then insisted on more than $3000 payment.

Please see above. The job was awful.

DESCRIPTION OF WORK
This was an insurance claim. My water heater burst and caused substantial damage. The Water Restoration Group did a fantastic job doing their part of the process. Because I was so pleased with their service, I allowed myself to be talked into signing a contract assigning the reconstruction to United Construction Group, under their corporate umbrella. This turned out to be the worst decision I could have made and the beginning of a chaotic nightmare that still isn'tf inished going into the 3rd month. I was told by one of the initial subcontractors that it was a 2 week job. I have remodeled 2 houses and have worked with various contractors on 2 other insurance situations,. but I have never experienced such incompetency demonstrated by the project manager assigned to me, and for United Reconstruction for hiring and retaining an employee that is so far over his head in the job, that if it didn't affect me and my life no negatively, it could almost be comical. 1st part - after the dry-out, baseboards had to be replaced and holes mended in every room and closet in my home. Since I knew it would be at least a month before the insurance company and the adjusters did their job and monies released, I put everything back in the closet. I got a call on a Friday by the project manager (hereinafter PM) telling me the men doing the work would be there Monday morning. So I emptied everything out of every closet, pushed what I could toward the middle of the room and waited. It was 10 days before anyone showed up!. No call. When I asked about the delay, they said they were never called about the job until the day before they showed up. 2nd part. The bathroom vanities were to be replaced. The PM came by 3 times measuring and checking that the vanities I originally chose were still what I wanted. The afternoon of the 3rd visit and a thrice checking my preference, the PM called me to tell me that the style was not being made anymore and he chose the vanities that I said I liked in 2nd place!! The following week I was told that the men doing the work would be there on Thursday to begin removing the vanities and replacing with the new ones. So, I emptied both bathrooms completely. It was over a week later that the men arrived. They said they told the PM they had another job and couldn't have possibly have been at my house when promised. ( That is now 2 times that promises were made with absolutely no basis for the promise.) FYI, there is a major leak under one of the sinks that I am still waiting to have repaired. 3rd. part - My kitchen cabinets were being replaced. I was told on a Thursday that that deconstruction of my kitchen would begin on Monday. It took me all week-end to completely pack up my entire kitchen, which stuff was then put into my living room. All my dishes, glasses, pots and pans, etc. etc. were packed away. I was assured it was a 3 day job and my fridge would be plugged in another room, so I would be inconvenienced for a short period of time. Remember the vacant promises? I lived with everything from my kitchen in my living room for 10 days before anyone showed up. No call, nothing. Every time I called about anything, there was always an excuse, which were total lies, and blame was always placed on someone else. This PM has NEVER accepted any responsibility for the problems of this job. The cabinets are in but the dishwasher line was cut and I am waiting now for 2 weeks for a replacement water line that I was told was so hard to find, yet it is a Whirpool from Sears!! The PM miscounted the cabinet pulls, so I am2 short! There is more...grout, painting, plumbing all needing more attention. Absolutely every aspect of this project was so mismanaged that it is obvious that the customer's satisfaction is of no importance to this company. I was so dissatisfied that I have called the head of maintenance in my community (It is very large..almost 5,000 apartments) and have asked him to add United Construction (not United Water Restoration) to their list of companies that will not be welcome to work here.

I believe they rely on taking advantage of people when they need help most. My insurance company could not pay them for their work, and they have a very bad reputation around the area. We now have to pay $500 to break away from this company and use someone who does not plan to scam us.

DESCRIPTION OF WORK
They came to remove the water out of the walls and floor. They basically tore up my entire floor and wall without giving us an initial quote.

I called United Water Restoration Group Inc - Pompano Beach at about 11:00 pm at the emergency number.  Jorge Lopez was here until 2:40 AM. I could tell that Jorge really cared about what he does and wanted to do a great job.  He was able to calm me down as I was pretty upset.  He explained to me what he was going to do. He  has a good heart and accomplished getting the job done.

DESCRIPTION OF WORK
I had a flood in my house.

Thank you very much for the kind review. We truly appreciate your business.
5.0

Rodney was awesome.  He was referred by Bo from Cape Plumbing.  Rodney was there quickly, he was very thorough in his search. He was very honest and gave us the good news- no mold!  I definitely would use them in the future if I ever have a problem.

Dear Member, We sincerely appreciate you taking the time to leave us a review and we appreciate your positive feedback. The greatest compliment we can receive from our customers is a referral to your friends and family that may be interested in our services that we offer. Again, Thank you.