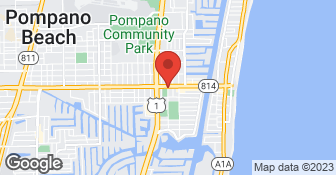 We are a full service glass and mirror company, and specialize in bathroom and kitchen remodel. We do roofing and complete home remodeling.

We did a lot of work for this company and they owe us almost $10,000.00 and is refusing to pay for work that was completed with a contract. So if your doing work for them beware.

After reading the previous negative review, since I was not that far from Atlantic & Federal, decided to stop by their store. I found this company at Floor Décor, and as they are a large national Tile Store, didn't think they would display & promote any shabby contractors. So along with the printed negative review I stopped in and asked for store manager. The review was read and I was very satisfied with the explanation so an appointment to see my job was scheduled for the next day. Sean arrived, looked over the job, drew up a design sketch and I dropped them off a deposit that afternoon. About 5 days later, as he had said, someone called me to set up the installation date, and a day or two later my glass was installed. Sean, the installer was great. He noticed a "defect" in the tile work that would have caused water to land outside the shower on the bathroom floor and he designed the installation to prevent that from happening. It's now been a couple weeks and not a drop of water has gone outside the shower. He has a bunch of photos of very high end jobs he's done that made my job look very basic so yes; I will call them again for sure.

We hired South Florida Construction Group to remove and replace the mirror in our guest bathroom. Would never hire or refer to anyone this shady company. I was quoted the exact price over the phone and Sean Farrow came to confirm measurements. 1. He tried to increase the price that I was quoted 2. He incorrectly measured the mirror the first time 3. So 5 weeks later they finally installed the correct mirror 4. THEY GLUED THE NEW MIRROR ON TOP OF THE OLD MIRROR!!! Once I realized what was done I called the company; the representative said she had never heard of such a thing before she would talk to Sean Farrow. I also told her to let the owners know I wanted this fixed, this was a hazardous accident waiting to happen. I wanted them to do the job they were hired for, she replied of course, she also knew the old mirror was being removed because she took the original order. I followed up a couple times they did not want to do anything about it. South Florida Construction Group its owners Peter Kolosvary and Eid Marwan along with employee Sean Farrow are a company with poor values and business ethics. This must be the way they practice business by covering up their bad jobs. Their motto should be if the customer can?t see it we don't care as long as we have your check.

Description of Work
We hired and paid for them to remove old mirror and replace with new mirror. They glued new mirror on top of our old mirror without our knowledge. We found out after they left.

We specialize in concept closet designs as well as wall units , laundries , garages and much more! We guarantee your satisfaction, and we won’t leave until the job is done right. We pride ourselves on the quality work we provide, while delivering great customer service! Check out all the services we offer below and call -or- click to schedule a free estimate today!  …

electrical and plumbing but do have trade partners for these services.

No, South Florida Construction Group, Inc does not offer a senior discount.

No, South Florida Construction Group, Inc does not offer warranties.

Are there any services South Florida Construction Group, Inc does not offer?

electrical and plumbing but do have trade partners for these services.