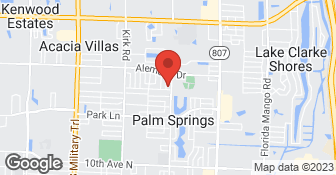 Jaine was professional and knew what he was doing, good and consistent progress thru the week, cleaned up well.

Dear: [Member Name Removed], Thank you very much for submitting Rating and Reviews , as I promise to you it will be complete at time manner , it's why I work hard and fast . Have a wonderful, fantastic and excellent day. Jaime

GRANITE COUNTERTOP- Grade: F Jamie wrote out the work order, accepted payment and oversaw each project but he subbed the work to Geo with American Marble. They were punctual and the steps seemingly went well - estimate, removal of existing countertop, sink and faucet, installation. The granite looked beautiful but there were several issues with the fabrication: - apx 1/2 inch of one wall was busted in to accommodate the granite. - A few weeks later, while the kitchen was still apart (stove, faucet, and dishwasher were not yet installed), I realized that the tip out sponge tray had been removed and was under the sink. Because the sink hole was misaligned it no longer allowed the tip tray door to close completely and Geo apparently removed the tray and put it under the sink without saying anything. When I pointed this out to Jamie he said 'go ahead and use it no one will notice that it doesn't close completely'. - When the dishwasher, faucet and stove were installed I realized that the other side of the granite is a 1/2 an inch from the wall (one side too deep into the wall and now the other side is a half an inch from the wall). This causes the stove to not sit flush with the wall and a cabinet drawer no longer opens fully because it now hits the stove. The counter on one side of the stove sits out half an inch further than the counter on the other side of the stove. The back splash tile has not yet been installed. I don't know if or how they will make up for a half an inch. - Another issue with the granite fabrication is that no holes were drilled underneath to be filled with wood necessary to brace the dishwasher. Geo the fabricator or Jaime the contractor should have made sure this was taken care of. - I found a valve handle under the sink. When the plumber arrived he realized that the handle had been broken off and needed a replacement. Geo and his assistant turned off the water, removed the sink and faucet and turned off the valves - they were the only ones who could have broken this. PAINT CABINETS, BUILD SHELVING TOWERS - Grade: A for the contractor - Grade F for Jamie who didn't pay him the full amount. Vijay was the subcontractor and he did a beautiful job. He has over 20 year of experience in cabinetry and showed. Could not ask for more. He was extremely helpful. REPAIR AND PAINT INTERIOR WALLS - Grade: C / Price $2500 There were areas of the house that needed holes and cracks filled. Some of these areas were not sanded before paint was applied. The painter did a fine job. Jaime did the wall repair. Price is a huge issue with this job. Jaime told me it would take 2-3 men 3-4 days to complete. It took one man 3 days and he worked sporadically on repairing the drywall. PLANT AND TREE REMOVAL - Grade: C / Price $2650 Several trees and shrubs were removed. Unfortunately, they removed a small tree that wasn't supposed to be removed. It was replaced with a bush of same species. The planting of the new bush was done without care and it began to die within a couple of days. Constant water is slowly bringing it back. They also broke a resin statuary in the back yard. GUTTER INSTALLATION - Grade: B / Price $1100 The gutter contractors did a great job. I dont know who they were. The issue is with Jaime. The front of the house needed a gutter: $450. The come and go, its great. Then Jaime tells me I should have the rest of the house done: $650 and gutters are put on the N, S, and E side of the house. Then Jaime tells me I really should have the West side done. He wants another $450 for apx 25 feet of gutter with a downspout. I don't understand why this wasn't done when they did the rest and say its too much. He went down to $350. I passed. FRAME AND FUR APX 3'x11' WALL - Grade: D / Price: $900 Jaime did this work himself. The wall needed to be built out 2" to accommodate electrical work. Unfortunately the build out does not blend with the existing wall. You can see where it is built out. Jaime said you cant blend plaster. He tried using concrete but it doesn't look good. Certainly not $900 worth. PLUMBING - GAS - Grade B- / Price: $1800 I don't know the name of the subcontractor. I had to have the gas line moved from coming up thru the floor /crawl space under the stove to coming thru the back wall. It needed to be done quickly because the flooring contractor would begin within a few days. My primary issue with this is the price. I felt I had a jacked up rate because I was in a bind and needed it done quickly. All in all, I paid about $200 for the plumber to do this. When the gas inspector came out, changes had to be made to the plumber's work. REMOVE BASEBOARDS, CASING, AND KITCHEN FLOOR TILE - Grade B / Price: $2450 Jaime did this work himself. He did a good job but he didn't remove the casing from a doorway that was marked "removal'. When I pointed it out, he accused me of writing that on the casing. It was never removed.

Description of Work
Jamie's Construction provided several services in a home I recently purchased. Since Jamie works a la carte, writes separate work orders and uses different subcontractors for each job, I will be grading each service separately. Unfortunately, Angies List would not allow me to provide separate reviews. Jamie, himself, does drywall but claims to do everything; hires other contractors to do the work. I found out that one of the sub-contractors didn't receive the full, previously agreed upon, payment from Jamie.

Jaime is very professional and responds quickly to any questions via text message or phone call. My wife and I were impressed with the quality of his work and we would use him again.

Description of Work
Install and paint concrete sidewalk on side of home to connect pool/patio door to exterior bathroom door.

Thank you very much for submitting Rating and Reviews, Have a wonderful, fantastic and excellent day

The work was really fast, accurate and beautiful. Mr Jaime Lirares was really wonderful. His project was on time, on budget and pleasant. I have looked for a company like this for years! He's local, he has the greatest attitude and a fantastic work ethic.

Dear: [member name removed], Thank you very much for submitting Rating Reviews , we struggle, and put all our effort in order to come up with this result. I'm very happy with you and we look forward to working with You in future Home Projects.

Description of Work
Remove and replace with drywall in sunroom.

Thank you very much for your feedback

Jaime was on time. Since he came to our house, he started to work (he did not waste his time). Very professional and very kind.

Dear:Member, Thank you very much for submitting Rating and Reviews We put all our experience in order to complete all your Home Projects at your 100% satisfaction. We look forward to help out on your future Projects. Thank you Jaime Linares www.jaimesconstructionpalmbeach.com

Description of Work
I contacted him and he was very responsive. I didn't use his services because he was not familiar with the FHA 203K Rehab Loan requirements and how they worked.

Description of Work
I don't recall this using this company.

It went great. I live out of town and so I had given Jaime the code for the lock box into my apt. He did a great job. We spoke the first time and then it was mostly texting after that, which was in fact very convenient for me also. His communication was great every step of the way. He even came back to do some more work for me after he did the first initial part. He even took some photos of the things after he did the work and sent them to me via email. I have not been into the unit myself, but my uncle has been there and I have the photos Jaime sent me. It looks great and my uncle also said he did a great job there. I felt very much at ease working with Jaime, and would be happy to call him again for any other work or to recommend him to you. He was very professional and honest with me. I felt very comfortable dealing with him and I think he is a hardworking honest good person. I did not need any major renovation work done, but I am confident from what I saw on his website that he can handle all sorts of projects, things that were much more complicated than my needs were here. If you need any type of handyman or renovations done I highly recommend you call Jaime for a quote before you begin. I can only inform but...in the end...it's your decision.

Description of Work
Checking a one bedroom apt. for needed repairs and performed such as Patio screen repair and replacement, Fixing of closet doors and tracks so they will open properly, replacing a ceiling fan, fixing the front door lock assembly, replacing door stoppers, sealing a odd circular shaped hole on the wall that was missing a switch plate,and general checking of the unit to make sure everything else was in order.

Dear: [member name removed], we really appreciate your feed back, we strive and put all our effort in order to help others thanks for your help. Have a wonderful, fantastic and excellent day

Jaime's Construction Services LLC is currently rated 4.4 overall out of 5.

Are there any services Jaime's Construction Services LLC does not offer?