The Glass Guru of Palm Harbor 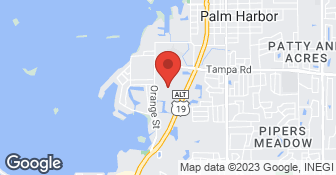 The Glass Guru Of Palm Harbor is Here to Help!Window Moisture Removal, Glass & Window Repair, Replacement Glass, Windows, Doors, Screens, Showers, Mirrors & More!!! We are the neighborhood glass shop you can rely on to be your one-stop solution and the best source for glass repair and replacement glass, windows, doors, screens, mirrors, showers and more. We proudly offer Free Whole-Home Window Inspections to help you fully evaluate your needs. Do you have foggy dual-pane windows with condensation or residue between the panes? Our proven moisture removal and prevention process can fix this problem at a fraction of the cost. We can also remove hard water spots and hard water stains and even remove scratches from glass for residential and commercial customers. Our professional glass restoration services are a cost-effective, timely and green alternative. When window restoration isn't the best option, our full-service location offers the highest quality, name brand replacement products at great prices. Above all else, we pride ourselves on offering the best possible service to our customers. Whether you are a home owner, business owner or both, we can take care of all your glass and window repair, restoration and replacement needs....

Our team members have the training and experience required to deliver top-notch home remodeling services. We answer your calls promptly, show up on schedule for all jobs and get the job done to specification at the first attempt. That is why we provide lifetime warranties on labor for all our projects. This has enabled us to develop an excellent reputation within the communities where we offer our services. Now, you can also enjoy the same commitment, dedication, professionalism and customer care when you call on us for roofing, siding, windows or gutters! When upgrading your home exteriors, we understand there are two things are that are important, a perfect installation and price! Ridge Top Exteriors is happy to offer both to homeowners like you.  …

As a Florida state certified contractor we specialize in window and door sales and installations only! We do not offer window or door repair services. Choosing the right replacement windows or doors is just as important as choosing the right contractor. Whether it's hurricane impact resistant or new construction energy efficient only the highest-quality products are offered. Products that provide lifetime guarantees, little or no maintenance and energy savings are key. Choosing the right contractor is just as important as choosing the right material for your project. That’s why we not only expect you to get the best product but also the best installation service. Bozarth Contractors does not use any sub-contractors for installations. Our in-house professionally trained employees provide exceptional service and quality workmanship that our customers expect. Our goal is to make you comfortable and pleased with both our work and value of service.STATE CERTIFIED LICENSE #CBC1253999.  …

Fast. Efficient. Kept us informed. Excellent price and the shower came out amazing.

I contracted with Erick, The Glass Guru to install mirrors for my bookcases and a glass shelf for a kitchen cabinet on August 25, 2013 and paid a deposit of $277.50. We agreed on an installation date that worked with my schedule, but on the day of the installation no one showed up. I contacted Eric and he told me he had put the wrong date in his schedule and would come out the following week. Again he did not show up. After several messages left on his voice mail he finally returned my call and informed me that I misunderstood the installation date. This was partially my fault as I did not ask for the date and he told me it would be Monday but we were thinking of different Monday’s. The work was finally completed and I was informed that the mirrored covers for the outlets were on order along with the shelf. He did tell me that he would give me the glass shelf as compensation for the mix up with the scheduled work dates. At that time I paid the balance due for the installation. I informed Eric that I would not be at the house as I was traveling and would call him to let him know when the items could be delivered and installed. When I got in touch with him to let him know that I was home and would like the shelf and outlets covers delivered and installed he informed me that they were left on my back patio. Not what I had told him to do. I informed him they were not there. I told spoke with him on January 6, 2014 that I would be more than happy to pay for shelf and I also that I wanted the outlet covers installed. As of today, February 23, 2014 I have not heard from him after leaving several messages. I would like him to contact me to make arrangements to resolve this issue.

Description of Work
Install mirrors for the back of two book shelves with outlet covers and provide a glass shelf for a kitchen cabinet.

The owner, Eric Hipps, ordered the door [custom size] and matreial the next day and kept me abreast of the delivery date. The day of installation, they arrived on time and installation was quick, clean, and very professional. They even came back when I wanted to move the towel rack to the inside of the door and did it for no charge. I would recommend this company anyone looking for glass work. Kevin Post Poo lGuard of Tampa Bay www.atampapoolfence.com ei

Description of Work
"The Glass Guru of Palm Harbor visited my home to bid on and eventually to replace a large shower door and surround in my Master bath. While on site, they measured everything and with a catalogue of the new doors available, they were very helpful in picking out appropriate glass doors for my home. Pricing was inline with other estimates I received and the product is top quality.

Overall the job went very well. When things didn't go so well the Glass Guru team stepped up and took care of it (One of our glass panels shattered in their shop causing a day or so delay) Eric contacted us, explained the situation along with a pic and took care of us. Reminded us of a famous quote: and quot; Do not fear mistakes. You will know failure. Continue to reach outand quot; Author: Benjamin Franklin Deon and Co Realty and Property Management www.TeamDeon.com

Description of Work
The Glass Guru provided Deon Co Realty a master bath shower design and consultation as well as a finished product.

The owner, Eric Hipps, responded very quickly by e-mail asking about the thickness of the shelf. I had a phone conversation and we discussed the project and options for the shelf. A few days later when I knew what I wanted, I called back to order. No response to my voice message. Nor to any of the numerous calls and e-mails over the next week or so. I eventually sought another vendor and found another vendor who did a wonderful job on the project. I understand that selling one piece of glass is not going to make Mr Hipps a wealthy man, but if you didn't want the job, just say so and don't make me waste my time trying to catch up with you.

Description of Work
We were looking for a single, glass shelf approximately 6' x 2'. We contacted the glass guru via a website form to ask about price and availability.

Very responsive and performed as stated. They went out to the home to measure and let me know what they could do and when. Extremely happy with their service. I had contacted other vendors and they could not do the work. Another never showed up for estimate nor called.

Description of Work
Replaced a broken pane of glass in existing window.

Eric showed up to give us an estimate. Everything went well with his presentation and he explained how the process would work from his estimate to when the installer comes back to install the window insert in the door. The install crew was very good and cleaned up after the job was finished. We will be recommending The glass guru to our friends and family as well as using them again for any of our glass needs as they offer many services.

Description of Work
Installed a new glass insert in my patio door going to the pool with sun shades built in between the glass.

The Glass Guru of Palm Harbor