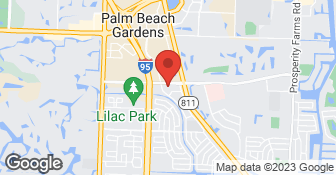 Leo Roofing and Construction is unique in that we are Florida State licensed and insured as both a building contractor and a roofing contractor. This enables us to provide a wide variety of services typically requested by homeowners. We have experience in planning, managing, and executing construction projects of all kinds, but we also specialize in roofing projects. Our team is professional and reliable. We always stay on the job until it's done to your satisfaction. Frank Leo, its President, has over 15 years experience in the construction industry. He has developed the knowledge essential to being qualified roofing and building contractors....

SPECIALIZE IN TRANSFORMING OLD CONCRETE INTO AN AFFORDABLE, BEAUTIFUL SPACE THAT WILL ADD VALUE TO YOUR HOME OR BUSINESS Let us help redesign and Resurface your old concrete into something new. Driveway Patio Pools Decks Commercial Business ACID Wash pools  …

At Alpha Foundations, we are redefining our industry and changing customer perception of what it means to work with a contractor. We believe that the homeowner experience should and can be more than mediocre service. We believe in a world where the customer is deeply cared for and builds a long-term relationship with their contractor. We see a world where the work is done right the first time, with the highest quality materials, by trained employees who deliver the best customer experience, and with a permanent solution that we stand behind. We believe the bar for an exceptional customer experience can be set so high that mediocrity in the contracting world is simply no longer accepted or tolerated. We use this perspective in all the work we do.  …

Great job. Frank Leo, owner, gave personal attention along the way. Everyone was very professional and this is a company I am referring to others as I am very satisfied with my beautiful new roof. Thanks to all.

We had 2 roof leaks. They came out to give us a quote and the guy who was here stated he and his brother also did work on the side and could help if we couldn't get on the schedule fast enough. Well, no one would ever get back with us. I called the office many times to get on their schedule and no call back EVER! We waited so long the leaks only got worse. Save yourself a headache and just call Ambatts or SK. Both companies are much more professional than this one.

Workmanship was beyond excellent. ! There were some delays due to incorrect materials supplied by a vendor. The vender suggested they make due, improvise rather than wait for a new shipment. Thankfully, we waited. Several of my neighbors have since used them. I’ve had two insurance inspections since the new roof and always hear compliments on the workmanship of my roof. I’m completely satisfied and it’s been 5 years and two hurricanes later without a sign of a leak anywhere. The roofers are hard and steady workers. Can’t say enough about their attention to every detail.

My parents hired Frank Leo of Leo Roofing who came as a referral through my elderly parents' neighbor. I am out of state and was pregnant at the time and he completely took of advantage of the long distance situation and misled me into believing that installment payments were due. He was hired in Feb/March 2016 and took payments in April 2016, July 2016, and September 2016, and I found out that as of Nov 2016 after my grandmother passed away, he had still not done the work on the roof. In fact, I learned he never should have taken additional payments from me! I paid over $18,500 to get this roof that never happened. He kept saying he was going to get to it and never did. We heard excuse after excuse. We finally fired him in December 2016 when he could not come up with a date certain for the roof tear off. I was so completely disappointed. At first I completely trusted this roofer and his staff Hunter and Michelle Sawyer, but after giving them months after being fired to work with me on a refund schedule and to make a full refund or even a partial refund since no services of value were ever provided and not hearing back from them, their lack of cooperation has caused me to make this more public. I wanted to give him the benefit of the doubt, but now I truly believe that he scammed us! And if I don't speak up then I'm afraid he is going to do this to other families! This roofer absolutely is unprofessional and threatened to pursue recourse against us for firing him after not performing despite the fact that he breached the contract for services long before we terminated him. He couldn't even give us assurances of performance after putting him on notice that he was being fired. BEWARE OF LEO ROOFING! He also misappropriated funds from us to pay a bat remediation company. He claimed he paid them and then this year they sent us an invoice and we were shocked to find out he never paid them!

Description of Work
Reroof of a roof on property located in IBIS Community that had leaks. The roofer was contacted in February/March 2016 for repairs. He claimed he could get it done immediately. The immediately turned into excuse after excuse which caused delay and further leaks and distress for the homeowners. The result was after claims that he would commence a tear off imminently, months went by. He was a smooth talker and friendly on the phone but in reality he completely failed to communicate, set up dates he would start work, and would not show up, and did not commence the project. He claimed next payments were due and through installments, made misrepresentations to me as to status and was able to collect $18500. I paid for a new roof that was never started! I had to hire a new company in the new year after I fired him in December 2016 for failure to get the job done. This was very disappointing.

They would not give us an estimate without having an engineer do the drawing. I found this unusual because we found 3 other contractors that did give us estimates without doing a drawing.

Description of Work
We wanted LEO Construction to enclose a car port into a garage.

Frank Leo and his team - from start to finish - couldn't have been more professional in installing our new metal roof and replacing all fascia. They came highly recommended to us by a few friends who had used them recently. We talked with several other area roofers and had several bids. Frank's bid was fair and very accurate. He delivered more than promised and got the job done on time and within budget. His people were a complete pleasure to work with. They even cleaned the work site daily and hauled off the trash in his own fleet of trucks. They were extremely flexible. They included everything needed for our job in the original bid. We had no added unexpected costs which reflects Frank Leo's experience in estimating and in doing this type of work. We are not related to Frank and didn't know him before we hired him. Our roof and fascia turned out great. Not one problem. This is an older house and the job was not simple. We highly recommend Frank Leo and his team of professionals and would use him again.

I noticed a roof in our neighborhood being redone by Leo Roofing and watched the progress daily as I did my morning walk. The workers went non stop (and it was a very large roof) and turned out beautifully. So I asked the workers the name of the company and then went to Angie's List to review them. Based on the reviews, I knew I wanted Leo Roofing. Frank Leo explained everything that needed to be done; gave us choices on what we wanted; and took care of everything. Our old roof was wooden shingles, and there was no underlayment for most of the roof. So after tearing off the old shingles, they had to put a lot of plywood in before they could start roofing. They did the gutters also, and I had to have a "super gutter" along the back where the pool screening hooks on. The workers were knowledgeable, professional and very hard working and I ended up with a BEAUTIFUL ROOF. Not only do my immediate neighbors agree, I have others in the neighborhood stop by and comment and ask who the roofer is. Frank Leo is very professional, personable, and knowledgeable about his work. He and his company did a wonderful job and I am so glad I picked him and his company.

I don't remember the date. All went well and I had tried others before them and the previous ones were unable to fix it. So I was grateful that Leo was able to finally get the job done.

Description of Work
They fixed a leak in the roof.

He did a great job. Everything promised was done. Neat, clean, excellent. There recently was a 17" rain. Not a drop of rain came in. I recommend them without reservations.

Description of Work
He replaced our roof.

Will review further after project is complete. They are doing a tear off of my cedar shake roof and making structural changes to add a concrete tile roof. Everything to date has been perfect, punctual, and per agreement. The tear off is complete and the new tile is on the roof today. They will start the installation the day after New Years. Updated report: The new roof turned out amazing! after nine months the roof just keeps looking better. Leo Roofing did a great job, finished on time with zero problems or issues. They were the lowest bid and did an excellent job. Would use them again for any home project or advice.