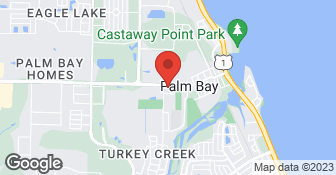 Became threatening and abusive on phone. Would not offer any satisfaction on poor installation. Failed to keep appointments and keep me informed of the work. Paid $300 to place order balance on completion. Issues with poor installation and failure to contact within reasonable time. Threatens me with physical violence will not acknowledge the problems with the workmanship or offer solutions

The estimate was done and work took place within 2 days to beat the rain that was coming! The crew were professional, cleaned up after each day of work and I get lots of compliments from my neighbors on my roof! I even found another small job I entrusted them to do on my home. I’m glad I found them and wouldn’t go anywhere else!

Description of Work
My roof was leaking and needed a roof over a roof immediately!

I called to schedule an estimate. I was clear about what type of roof I had, where I was located, and where the leak was. I called the office to confirm the appointment, because I had to make a special trip to meet the owner. The day of the appointment, the owner didn't show up. I called the office, and they had the owner call me. He said he was close by and would be by shortly. He confirmed my address, and then said, "I don't work on those roofs." I asked why no one had told me that in the three phone calls I had made to his office. He got incredibly defensive, and quite rude. When I said I had made a special trip to meet him, he hung on me. Fortunately, the roofer who gave me my second estimate did a fabulous job.

Description of Work
Needed roof repair due to a leaking roof on my second home.

I called and made an appointment for an estimate. The estimate went smoothly. I signed the paper and got it back quickly to get scheduled. Something happened in the office that it took MANY weeks to get on the schedule. I had to cancel the first appointment and took another long delay to get on the schedule again - OK that was my fault. But the second time, when I called to confirm the appointment, they had only two hours scheduled at noon. When the owner talked to me he said my job was not on the schedule and would be MANY more weeks to get on the schedule again. He was not willing to explain how this happened or to move me up in the schedule, then hung up on me. I would never do business with customer relations like this. I simply asked what could be done to put me higher in the schedule. I have waited over two months through the height of hurricane season with a roof that may not be safe for a storm. He wasted both our time for the estimate. I took time off to meet him for that appointment. Thanks for nothing Hough's.

Description of Work
I needed my metal roof screws checked tightened down and the whole roof checked to make sure it was in good shape.

Description of Work
They replaced the flat roof on our 60+ year old house. They had been repairing the leaks for a few years, but we finally decided we need to |have the house reroofed. They used a fairly new method, and were able to build in a small raised area that will allow the roof to drain more efficiently. They are very nice and professional people, especially Justin.

Description of Work
Hough's replaced my roof. They were efficient and cleaned up after themselves. Their quote was quite a bit less than others that I had received. It has been well over a year now and no problems at all.

Description of Work
Performed gable roof repair and patio ceiling replacement. All work professionally done. I have used Hough Roofing before and can count on accurate estimates, the work being done on time and cleanup as if they were never there. Can't go wrong with Hough Roofing!

Went very well. Crew was very professional and did quality job. I would recommend Hough Roofing to any one.

Rude! Driver in companies truck cut me off in the middle of a rain storm! Way to represent your company!

Description of Work
Rude! Driver in companies truck cut me off in the middle of a rain storm! Way to represent your company!

This is the second time I've used Hough Roofing; the first job, in June, was having them replace three sections of metal roofing at the back of my house and rescreening the back porch. After that job was finished, I had to call them back because the rain leak in one section was worse than before. Also had much more overflow from the roof areas than before; the new roofing caused interference with the gutter drainage. They were prompt about coming back to re-do the leaky area so I got them to re-do my gutters. Overall very much satisfied with the work; Alan, Justin and the crew were very professional and personable. My only complaint is that the crew did not police the yard for debris after the job was completed. Both times they were there, the yard was littered with pieces of sharp metal, shavings, nails and screws. I found this out the hard way, by stepping on a sharp edged metal fragment and slicing my foot. However, for quality and good service I would definitely recommend this company.

It went very well. They had a very good warranty and did quality work. This company was very knowledgeable in their field. The speed of their work was superb and I have no complaints what so ever on this company. I would recommend this company to anyone in the area.

Description of Work
They replaced our entire roof.

They completed the repairs in a timely manner.

Description of Work
They made minor repairs on my metal roof. Some of the screws had come loose and were sticking up.

The installers damaged some of the windows and the caulking was unacceptable. When I voiced my disapproval, the owner, Alan, came out and was simply obnoxious. I was shocked at his blatant rudeness to me as a customer and will never use his company again. He did have the installers come back out and redo the caulking. I paid the invoice in full but was not satisfied with the job. Since then, I have had the caulking reworked by someone else.

Description of Work
This review is for the replacement windows installation only. I used this company for a new roof installation on my home and was very satisfied, which is why I also gave them the window job. The windows are fine now, but I had issues with the installation.

Lowest price but longest lead time of the quotes I solicited. Initial response was quick and the proposed work seemed reasonable. Good recommendations from friends and I also had this company roof my former house with good results. A couple of problem areas were quoted on a as-needed basis since they would not be apparent prior to tear-off. The lead time was as big a factor as any in not choosing this company.

Description of Work
Quote for a shingle re-roof

Once contract was signed took about 6 weeks for them to start the job, which we were told beforehand. Crew and dumpster arrived within minutes of each other. The crew finished in two days, which we appreciated. All the noise was annoying our dogs immensely! Crew was efficient, courteous and willing to answer any questions. The roof has been tested several times recently with torrential downpours, and appears to be fine. Price was lower than 4 other estimates. And got a referral bonus for referring friends.

Description of Work
Replacement of roof.

Description of Work
Diagnosed and fixed problem with leaky roof.

Description of Work
Hough competed some roofing work for me.

VERY Hard workers. Very pleasant. Got the roof done when they said it would be done. The best cleaner-uppers I have had yet. Would recommend and use again.

It went very well. They first came out during a tropical storm to try and stop the water damage and then they scheduled a time for total repair. They were on time, professional, tracked down the problem and fixed it. I have also used this company for hurricane shutters and was very satisfied.

Description of Work
Repaired a leak caused by a poorly installed vent from a roofing job done by another company that did not stand by their warranty. Put in a new 10' vent and reshingled area. Also checked other vents and caulked them.

Total Home Roofing, is here to install a high-quality roof that protects your family. We’re committed to providing homeowners with the highest quality service and the strongest, most lasting results. We offer virtual and in-person appointments with a wide range of financing options to make the most of your budget. Total Home Roofing is dependable and unfailing when it comes to your new roof. Our team of installation professionals lives in neighborhoods just like yours, so we know exactly what kind of weather your home contends with.Total Home Roofing is here to get the job done right, the first time, on time.  …

You know your roof needs some attention, but you might not know who you can trust to handle the job. Don’t worry ....you’ve found the right roofing contractor for your residential or commercial roofing needs. RenewPro, Inc. offers a variety of hassle-free roofing services in the Space Coast, Florida area. Our roofing specialists have a combined 100+ years of experience in the roofing industry, and we pride ourselves on our ability to act fast when our clients need us the most. Roof repairs and roofing system replacement is our calling card, and we welcome insurance related work when catastrophe strikes! We specialize in insurance claim processing and will work directly with your insurance carrier. Count on us to find the best solution for your asphalt, metal or wood roof. Contact our roofers right now to schedule a time for your service.  …

In 2007, Francisco Dalmau established Central Homes Roofing. From the start, he was committed to working closely with his clients to understand their vision, help them select the right materials, and skillfully transform their homes. Because of his commitment to partnering with clients and challenge to our crew to tackle each project as if we were working on our own home, we have gained a reputation for outstanding work and excellent customer service. Our clients range from private homeowners and general contractors to construction companies, real estate firms and management companies. We work on new construction, new homes, restoration and remodeling projects. We enjoy partnering with architects and interior designers as well. All of the projects that we tackle are as unique as our clients. This is why we customize each project for our clients and have access to a large range of materials that reflect a diversity of styles.  …

How is Hough Roofing overall rated?

Hough Roofing is currently rated 4.5 overall out of 5.

What days are Hough Roofing open?

No, Hough Roofing does not offer eco-friendly accreditations.

Are warranties offered by Hough Roofing?

What services does Hough Roofing offer?

Are there any services Hough Roofing does not offer?