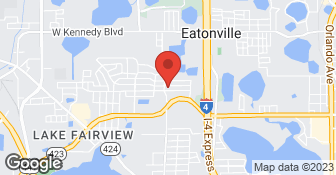 Mr. Mr. Cortes from J.C. HANDYMAN SERVICE did a quick and efficient job. They came on time with all the equipment necessary and completed the job quickly.

Description of Work
Out side door from garage

We thought we would need a whole new door but he was able to add something the door was missing at the bottom to stop critters from coming in. He was quick, pleasant and affordable! We will recommend this company and use them again.

Best Experience so far with a contractor in Orlando, FL. Chuck responded quickly to our questions during the product selection process. We were shocked how quickly he committed to the job and carried out the install. Definitely a true professional. Hands done, Chuck will always be our first call for our door needs.

Description of Work
Chuck added a glass door insert for us for our front exterior door.

This company removed, replaced, and installed 8 x residential doors back in 2015 and it was a horrible experience. I finally caught up in writing this review because I am writing a positive review for another vendor. The contractor had to come back to the house multiple times. A couple of doors were incorrectly purchased (hollow not solid OR solid not hollow). Another time he had to come back to fix a couple of the door knob fixtures because there were not installed tightly. For instance, one doorknob had a screw driven into a glob of caulk instead of the door wood. Another time, the contractor had to come back to the house to make door adjustments because the door was not closing correctly. I would not hire this contractor again.

this was an installer that I hired to do this job. this is also the only job he did for me. Good help is hard to find. look at all my other reviews
5.0

Gentleman came out promptly to take measurements and provide an estimate. He provided me with an estimate within a couple days and was in constant contact about the progress of the door being built. He dropped off the finished door and trim within 2 weeks and provided me with the installers contact information. Installer reached out to me within 24 hours of door drop off and came out to install the door on my next day off. They were prompt, courteous and did a good job. Very happy with their work

I would give them an A+. There was no mess and no frustration.

Description of Work
They replace the door going into my garage from the house.

This company never responded to me.

Based on reviews reached out to this business to get an estimate to replace our homes aging front entry door. After an initial quick response the owner indicated his business truck was in the shop, but that he could come by and provide a free estimate later the next day. That didn't happen. As a matter of fact I never heard from him again. Even after emailing him a couple of additional times. In my books that's a failure of service in every way. F!

I couldn't be more pleased. Chuck was able to stop by the same day to provide a quote. He understood exactly what we needed and was able to match the new door up to existing doors in our home. Once I accepted his proposal, in just a few days time he was able to schedule the installation. Though he had to remove some drywall and trim, the installation was done quickly and professionally with a minimal amount of repairs needed. The doors themselves are of good quality and the price was very reasonable. I won't hesitate to contact Chuck again should I need new doors or repairs to existing ones.

Chuck was prompt, thorough and very professional. He has many years of experience and the installations were perfect. I would have no hesitation using this company in the future and recommend without hesitation.

He came for two different jobs. Each was $400 I described to him what needed to be done and he arrived promptly, was very professional and did a great job. The second was more challenging but he still stuck to his price. I would use him again. He replaced 2 very old doors

Chuck was very punctual and professional. He installed our doors earlier last year however, when I called him to come out and do some minor adjustments to the doors he more than willing to do so. He did such a great job on adjusting the doors that it felt like brand new doors all over again. We love the doors that he recommended, as we know that door was customized and put together by him. He even adjusted our front door without any hesitation or added cost. We really appreciate finding business owners like Chuck that take pride in their work, their product and their business. Thanks again Chuck! We will definitely refer you to all our friends and family.

Had Chuck install two exterior doors, and both had issues. Both leaked during rainstorms, and both were left unfinished (one with bare unfinished wood). Chuck came out and "fixed" them once; however, both problems persisted. He was supposed to come and redo the trim around the unfinished door, but he did not show up for the appointment and refuses to answer/return any phone calls. On top of all of these issues, he was very disrespectful to my property. There were several holes left in walls that he did not fix, a large chunk of concrete was broken off of my house's foundation that was hastily and poorly patched, and the cleanup was extremely poor. I would strongly recommend that any interested customer take their business elsewhere and avoid the headache.

The installation went great. Started on time. Chuck was very thorough and the doors look fantastic. He paid attention to every detail. We will recommend to all our friends.

Description of Work
We needed a new double exterior door with wide sidelights replaced as well as another single door.

After speaking with a few other people about replacing our door and made to feel like I was bothering them, I spoke to Chuck. He took the time to answer and ask questions. I immediately felt like I was in good hands and this guy really knew his stuff. My husband and I talked it over, texted a few photos and decided to gave chuck the job. Monday morning Chuck said he could install our door that afternoon. He did an excellent job and I would use him again and would not hesitate to recommend him. Unfortunately I did t realize the alarm wasn't working while he was here but when I called Chuck he said I'll come right back. It took him less than five minutes to have the alarm working.

Chuck was great. I was under the impression that in order to get full lite glass I would have to replace my entire front door which was extremely expensive. It's a good thing I called Chuck! No other company ever mentioned glass inserts when I got 2 other estimates. I told him how our home is only a year old and we wanted some light in the foyer. He suggested using the existing door and dropped by to give us a catalog full of nice glass insert options. I emailed him my selections for a quote, ordered my favorite and he had it installed within a two weeks. My husband said Chuck's install was done within 45 minutes. Now our house entrance looks great and we have natural light! Thank you Chuck for presenting the easiest and most cost effective solution! We've even referred him to our neighbors who are about to get a glass insert installed as well.

Chuck ordered our chosen panel and installed it within a week. The 8ft front door had to be removed and the door cut to fit the new glass panel. The door was rehung and the new panel installed. Looks great! We had a long dark hallway leading to the front door, now there really is light at the end of the tunnel.

Description of Work
Chuck came out to view our front door and to determine whether a glass insert could be placed in the door. Chuck gave me a catalog with many options to pick from and gave helpful suggestions.

I made an appointment to have a door installed. He never showed. When I called he said he had phone troubles. Then he said he was getting married and leaving town. Thanks for the heads up buddy.

Description of Work
Didn't show, didn't call, left me in a bind.

Charles did a superior job at a very good price. His long experience really showed. He was quick to respond to the call and had the job completed in just a couple days as opposed to 6-8 weeks as quoted by competitors. Could not be happier and will use him again.

They were outstanding. The installation was on time, done well, polite, clean and I was satisfied with the job. They were prompt, excellent, came when they said they would and left when they said the job would be done. There was nothing I did not like about them. They were more expensive then another company but more prompt and on time.

My husband and I thought we were going to have to spend hundreds to get this door fixed. It had become difficult to open and close; we thought we had termites. Chuck assessed the situation and deduced that it had been poorly hung by the previous contractor. He then fixed it within minutes and refused payment! The door now works better than it ever did! We forced him to accept some money. Chuck is truly the door whisperer! He doesn't do screens, though. Just doors.

Chuck is a good guy who shows up on time, submits a fair quote and gets the job done right. In my situation he underbid the job because he neglected to factor the time for one of the doors. I gleefully offered to pay for his extra time (about 30 minutes) but he steadfastly refused the extra payment.

Description of Work
Repaired several interior and exterior doors in the house.

Chuck is a good guy and knows what he's doing. He showed up when he said he would; gave me fair price; and his work was first-class.

Nok Construction is a full service construction company. We can handle your next home improvement from start to finish. Design and build new construction, home additions, kitchen & bath remodels, water and fire rebuilds. We carry 4 lines of cabinets and full line of Shaw Flooring products. We specialize in green wise home improvements such as WINDOWS & DOORS, SOLAR and many other energy home improvements.  …

We are a small family owned business specializing in Kitchen and Bath remodels with a strong focus to details and customer satisfaction. There is no job to small or to large for us. We accept cash, check and credit as forms of tender.  …

Insured
All statements concerning insurance, licenses, and bonds are informational only, and are self-reported. Since insurance, licenses and bonds can expire and can be cancelled, homeowners should always check such information for themselves.To find more licensing information for your state, visit our Find Licensing Requirements page.
General Information
Free Estimates
Yes
Eco-Friendly Accreditations
No
Payment Options
Check
Senior Discount
10%
Warranties
Yes

Just Doors & Decorative Glass is currently rated 4.6 overall out of 5.

No, Just Doors & Decorative Glass does not offer eco-friendly accreditations.

No, Just Doors & Decorative Glass does not offer a senior discount.

Are there any services Just Doors & Decorative Glass does not offer?