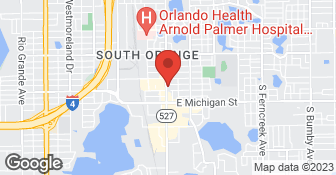 Specializing in commercial and residential service. In addition, we work with Home Warranty and Property Management Groups. Active member of NWIC and AEIC. Our policy is to "satisfy every customer, every time"! Family owned and operated since 1972. Licensed and insured. Recently celebrated their 100,000 service call....

Complete Air Mechanical is a family owned and operated HVAC and IAQ company that has been servicing the Central Florida area since 1992. We are committed to providing top quality service to our 21,000 and growing family of customers. Don't be mislead by other companies low prices & false advertising gimmicks only intended for one sole purpose, to get their foot in your door and add everything needed to the low prices or to upgrade you with some "bait & switch sales pitch". We do not believe that is a good beginning to an honest relationship. In today's economy, finding a good deal AND an honest company is imperative: We can help. Let Complete Air Mechanical show you the comfortable side of air conditioning. From replacing your existing system in your home to customizing energy solutions for new homes, Complete Air Mechanical delivers all your comfort needs at an affordable price. We feel that Complete Air Mechanical is more than just another contractor on the job. We view ourselves as an HVAC professional that will work with our customers to meet a common goal. To accomplish this feat, we must provide the best service and the best solutions at our very best price until comfort and satisfaction is achieved. Choosing the WRONG company could cost you more than you bargained for! Count on us to be your contractor of choice.  …

Our company, Air One of Central Florida, LLC, is highly committed to provide excellent air conditioning and heating services to our valued residential and commercial customers. We are licensed, insured, and are here for the long run. We look forward to taking care of ALL your HVAC needs in the Central Florida area. Free estimate on new systems,(we beat every competition written estimate price with $100 .)  …

Matthew Roberts, Inc. offers only top quality air conditioning systems. We have been in business since 1994 and have kept going strong thanks to loyal customers like you. Our goal is to serve each customer for their own individual needs, and meet those needs without over-charging or up selling, just to make a profit. We are an independent Trane® dealer and an authorized Rheem Team® dealer, as well as being NATE certified! Additional DBA - Matthew Roberts Inc Air Conditioning and Heating. License Numbers - 022399 & Caco58767.  …

They were scheduled between 8:00 a.m. and 12:00 p.m. and, unfortunately, did not make the four-hour window for the appointment. What's inexcusable though is that nobody called at any time to alert me of the delay. I called at 12:15 p.m. and the receptionist/dispatcher couldn't have been more disinterested. I was told "we would be next." When I asked when, I was told "It will be within the hour, and we'll call when he's 30 minutes out." The tech arrived an hour and a half later and there was never a phone call. The technician apologized about running late when he arrived. It took him less than 30 minutes to complete the work. He blamed the poor communication on the office.

Work was done through Home Warranty Company. Initial response from All Star R & R Electrical very poor. Took multiple phone calls to get response from Alllstar R & R Electrical. However, The technician who finally came out was fabulous. Excellent customer service skills. He knew his business. Very pleased with the work he did. But it initially took 2 weeks for All Star R & R to call to set up appointment.