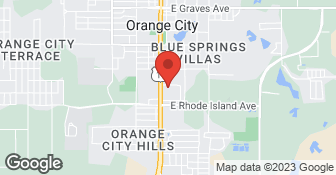 Locally owned & operated by firemen, Air Care of Central Florida is more than an air conditioning company; We strive to provide you and your home with the same exceptional service that we use to protect the community. We focus on honest, quality service and repairs. NOT just Sales. This is what makes us stand out, and what has earned us our solid reputation. Air Care of Central Florida, LLC offers flexible scheduling and quality service at a reasonable cost. Cash, Check, & Credit Accepted. Financing Available. Call today to schedule your appointment....

Ashley Air did a great job at analyzing our problem We have American Home Shield for another home and they still have not dealt with an issue from May. This company is definitely someone we would hire again.

Description of Work
A/C was not working: The replaced the capacitor. It was 30 minute work order.

Have used Air Care on multiple occasions including new install on a second unit, duct sealing and replacing a worn out fan motor on the main unit. Great work all around. Kip was the technician each time and he was fantastic. Extremely honest and thorough. Highly recommend Frank and his staff!

Had compressor and air handler replaced.. Fast and professionall service .

My previous AC company did a bad install, but because of the time of the year the unit wasn’t used very often. By the time the issue was noted it was out of their labor warranty. Frank was able to still able to easily warranty the compressor and still charged less that the original installer would have even though the failure was due to their negligence. It was organized quickly and installed quickly. The only delay was getting the compressor from the manufacturer because none of the distributors had it in stock. All the staff at Air Care were professional and friendly.

Best Air Conditioning Company I have ever used!!! My a/c went on a Thursday. Frank and his team had a new system installed the next day. I have put many bandaids on my system and new it was coming but did not think it would go out right before a hurricane. Frank did everything he could to make sure I had a/c the next day and I am very thankful. I highly recommend Air Care of Central Florida!!

I needed a new system and was expecting a huge cost involved. Frank and Hugh gave me 5 different options on new units and came in an affordable price for a good quality carrier system. They were fast friendly and clean. I’ve noticed a saving on my energy bill since the new unit is way more efficient than my old one. Great company.

Had a new inside and outside unit installed. Quality work, friendly, and knowledgeable staff! Owner personally contacted me to confirm I was satisfied with everything.

Fantastic! It was a Sunday night and my A/C stopped cooling. The tech showed up within an hour and had my system up and running. I had a blown capacitor. I was expecting to pay twice what I was charged. Highly recommended.

Description of Work
A/C not cold

The office staff were very pleasant. Easily got me on the schedule and even worked around my limited schedule. The service technician took time to teach me about the air conditioning unit, proper care, maintenance, and cleaning as a homeowner to minimize future problems. They even have a yearly program to come change air filters, service and clean the air conditioner twice a year and offer discount for any parts and service. The technicians were friendly, explained everything, and knowledgeable. And best part was they were cheaper than previous AC companies I have used. I highly recommend!

Great service at a reasonable price. The work was done quickly and professionally.

The tech inspected the HVAC system. It is an older system and due to the age it could not be repaired and needs to be replaced. Was advised to run at a higher temperature setting to make it last until replacement can be done. I was not charged a service call and appreciated his honesty.

They showed up on time. The service was supposed to include cleaning drain and coils as the pan was leaking when he arrived. He immediately told me that it was a big deal to clean the coils even before he looked at them. He had no problem getting to a picture of the coils being dirty, but said he could not get to them to clean them. He replaced a capacitor which he said was going to go bad, for $58, went through the motions of servicing the a/c and then left with the drip pan leaking worse than when he got there.

He checked out the thermostat as it was possibly the problem. He inspected what he first thought was the problem, the relay that tells the unit what to do. He checked on the Freon, old type, and said it was almost a pound low, but wouldn’t cause my issue. He replaced the relay, and started things up. Seemed to be working then he heard a click that sounded like the emergency heat was coming on, and it was! So, the original part, which he already replaced, wasn’t the issue. It was a stacked relay, which aren’t made anymore, although it’s not impossible, but will be very hard to find. My a/c is 21 years old so not surprised. He did however, disconnect the emergency heat coil and bypassed the relay. He put the old one that wasn’t broken, since it was fine. After realizing what the actual problem was, he rechecked the Freon level after he fixed the situation, and it wasn’t low as it first showed because of the heat and a/c were stuck on together. So, after looking at a $375 repair bill, they charged me the $60 service call, which is phenomenal for a weekend rate, and then for the electrical bypass work, etc., and my bill was $120!!! I was worried that anyone who is coming out would say, the system is too old and shot. He said, if it’s cooling your house, and not running nonstop, and the electric bill isn’t astronomical, then do small repairs until it starts breaking down a lot or just dies. Maintenance is key! The do a maintenance job for $90 that includes cleaning the coils inside and out, vacuuming the lines, check coolant, etc. But, if you sign up for the yearly maintenance check, they come out every 6 months, do it all and include one pound of coolant for free, and it costs $150. So, you are saving $30 just for the maintenance service that is twice a year, and the cost of coolant if you need a pound. Coolant can run anywhere from $60-$100 a pound depending on the type and the “wonderful tariff” b.s. because it’s made in Mexico. So I highly recommend them and they are honest!

Description of Work
A/C wasn’t cooling and air handler was stuck on blowing warm/hot air. I wrote a message online here on Angie’s List, what problem I was having it was late at night. I received a call at 7:30, on a Saturday, saying that will come out right away. Super impressed with the response time!

Showed up as scheduled, good communication.Answered my wife's questions in a proffeshional and patient manner. Did a very thorough job and cleaned up after. Checked out system. Very pleased.

For those Angie's List subscribers who are mulling over a range of convincing bids for replacement of your costly HVAC system: Request a bid from Air Care of Central Florida before you make that final decision; you won't regret it. They may or may not have the lowest initial bid but they are open to reasonable negotiation and they will install your new equipment in a very professional and timely manner. Hugh, the company rep, will give you a very detailed, precise bid on the equipment you want and the price you agree on is exactly what you will pay. The technicians who installed my Bryant heat pump and air handler, Kip and Ricardo, were very knowledgeable, personable and professional. They completed the installation in 5-6 hours, tested everything thoroughly and cleaned up and hauled away the old units and debris. Hugh then came back the next day for a QC inspection and checked everything again. Also had my ducts cleaned which went equally well. I was very pleased and impressed with the entire process as well as the employees I dealt with. I highly recommend this company.

From the first phone call and reaching Shirley in the office, to the Carlos, the tech, this company provided amazing service. As it turns out, a part was needed and due to the fact that the furnace was very old, it was doubtful that a replacement part could be located. The tech offered to take the part and attempt to locate a replacement. He along with the owner spent hours in an attempt to track down the part. It wasn't long thereafter that I received word that they had been successful. The part was ordered and as soon as it arrived, Carlos did the install and the unit is working great!! I continue to highly recommend this company to anyone looking for an A+ experience.

Description of Work
The furnace at my elderly parents home stopped working and with the colder weather, it was important that we had someone come out to check it out.

Great service. I really can’t find enough superlatives to describe the detail and professionalism of their technician.

They were able to come out same day and they quickly diagnosed my problem. Hugh was great and very professional and empathetic. They had parts available to make the repair and educated me on how I can better manage the system going forward. I will be signing up for future services with them

I made the mistake of using a coupon for a $60 service call. The technician, Carlos, performed the inspection, including leak testing, and said all he found was the unit was 3lbs low in refrigerant with no leaks. Technician added refrigerant and left. Total charge was $341.50 for service call, inspection, leak testing and refrigerant. -- Afterward, unit was still not cooling correctly and through my own experience, I found a clogged drain pipe which was causing the condensation to back up and trip the auto-shutoff valve. Unit still does not perform to 100% efficiency, but I feel like the technician should have found the clogged drain pipe while he was there. Plus I felt like the "service call" should have included some additional service. As it was, it amounted to the trip charge, as nothing was really included in that service.

Great service, great company, was here in less than an hour and had my AC fixed and running in 2hrs.

AirCareCFL arrived right on time. They not only replaced the air handler,condenser unit, and thermostat but, even pulled out all of the old piping and replaced it with new updated material. Ryan and Ricardo were friendly, polite and professional. Would I hire AirCareCFL again?...in a heartbeat.

Description of Work
I had to replace my entire system.

Wonder! Hugh explained everything they were going to do which was great because I could then explain it to my husband so he'd know he got his moneys worth. I have seriously bad allergies and can really tell a BIG improvement. They did an excellent job. Thanks Guys!

Description of Work
Ducts cleaned, sanitizes and sealed. They even took apart my Two Air handlers and cleaned them because I've never had them done in 25 years.

Thank you for your kind words! We are so happy to help you and glad you chose us for your air conditioning company!