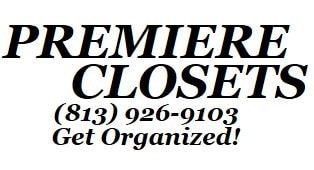 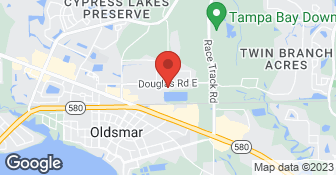 Premiere Closets is about more than just closets. We create Tampa custom storage solutions for your bedroom, pantry, home office, garage and more. Premiere Closets is an independent, family owned and operated business serving Tampa Bay's commercial and residential needs since 2004. We are not a franchise, so there are no additional fees to pass along to you, the customer. We offer a superior quality product at a lower cost to you....

Amazing Job Done by Robert and his crew! quality work! perfect design! I needed a couple of closets done in my house and I needed them done before the holidays because I have family visiting, Robert was great in accommodating the dates I requested, everyone else told me 6 to 8 week. very affordable great quality! I definitely recommend Premiere Closets! Thank you very much Robert! I have more work to do in my house and Premiere Closets has my business! if you get to this Review stop looking for anybody else! Premiere Closets is the way to go! Thank you Robert and Crew! I'll see you guys real Soon!

Description of Work
Reach In Closets

All went well. Robert came to the house,asked what I wanted, took some measurements, loaded them into his computer, and came up with the design below. About a week later he called and asked when to install it. Agreed on a day, the installer, Sein (spelling might be wrong) showed up on time, Backed the truck into the drive, and went to work. About four hours later, he was cleaning up and driving away. The second picture is the pantry with the shelves loaded.. The shelves are 19 1/2 "W and 32" D with 100% roll out and 100 pound capacity. Premier Closets will be back to add two roll out shelves to a cabinet, under the island counter top, with a 15" overhang for the breakfast counter...where things go and are never seen again!! Right now, we are making some modifications to the plans for the office...can't wait....More to come!!

Description of Work
Rolling, pull out shelves put into an existing pantry

I have had other companies do my closet work over the years - by far, the guys and gals at Premiere Closets in Oldsmar were on top of their game in every category - sales presentation, pricing, on-time for scheduled installation date, and the crew that came out was outstanding in every way.

Description of Work
2 master closets, a pantry, and a storage area - all done with Premiere Closets.

I would hire this company to do everything in my house if they did it! Robert and his crew have unbeatable work ethic. The appointment times were kept and prompt, the product is exactly what was promised, the skill of the install is phenomenal to the point that I don't even need to touch up the painting I did before the install! The installer was very friendly and professional. He did a great job cleaning up at the end of the install. Being able to organize in smaller spaces is life changing! I highly recommend doing it in your home and having Premiere Closets do it. It's worth every penny, which was very reasonable.

We didn't hire them as we needed a brand new closet built in our garage and they didn't offer that service. They promptly called me and was very professional.

Description of Work
New build on a garage closet

Susan Peake is a genius. We bought a beautiful S Tampa home with absentee closets and storage, and she designed us a masterpiece. Thanks to her, we have awesome storage, and wonderful craftmanship at that. I've always dreamed of solutions like this...and Premiere came in at a price/quality that would bring competition to its knees. Please don't fall prey to a national chain; these guys are unbelievable. My realtor/high end designer recommended them, and for good reason. We wanted custom colors, surface veneers, odd shapes, extra shelves after install. They did it all...and no mess. I will admit: the owner was having a bad day when he showed up to do our job. By 'bad day,' I'm referring to demanding his team support his clients 110%. I will never be offended by someone who is angry at providing less than expected. It didn't show in finished product. I love their work. Well done, Premiere. You gave us a home we now are in awe of, thanks to you.

Rob the owner was amazing at designing the closets. I compared the designs and price with other companies and his designs maximizes the space beautifully and the price was better. Installation was easy and they were very professional. I love the closet space so much and would recommend them highly. He allows you to see the design in 3D which makes it so much easier to visualize.

Description of Work
2 walk in closets and a pantry

All went as planned. Honest businessman and completed project to my satisfaction.

Robert Morse is a straight forward gentleman. He came to the house did measurements on both rooms and design two closets to my specific needs. Price was reasonable and I hired the company to preform the work. Justin and his partner installed the custom closeta with pride in their worksmanship! They Very professional and easy going. I was very pleased with both closets! I spoke with Robert requesting three addtional shelves . Without hesitation he mentioned he will the bring the shelves (reasonable fee). The custom closets look amazing! . Upon install There was slight issue beyond there control but the installer contacted Mr. Robert Morse and he contacted me immediately. The installer return the crown molding back to the shop. It took several weeks to install the New crown molding due to a new order but as promise Mr. Morse was apoligetic and I know this issue was beyond his control. (Manufacture issue) The owner ( Robert) kept his word through out the entire process without any hidden agenda. I am picky with whom I hired but this company was beyond my expectation of quality worksmanship. I will hired them again for addtional work ! I am waiting for a drawer handle . will update

We contacted Premier to install closets in our master bedroom. The salesman arrived on time and then started right away measuring the closets. We agreed on the price, and then scheduled the install. The initial install was scheduled for the 12th of February for the closets, and the 13th for the office. We received a call that our order was in, and would we like to install early. Of course we would. The arrived on the 5th of February to start the install and got right to work. The installers were very professional, and made sure that if we needed to make a change they would accomodate. To our surprise, the completed the install in about 5 hrs. The closets looked great, and we then agreed to have the install for the office for the 12th, the original date. On the 12th of February, we waited for them to arrive, and by 10:30 they still had not arrived. I then called their office, and Robert( the owner) stated that we were scheduled for the 13th. He explained the mix-up and we agreed on the 13th. The arrived on time and installed the new desks and cabinet for the office. Again they were very proficient, and finished in about 4 hours.We were extremely satisfied with the closets and office, and will definitely refer our friends to Premier Closets .

Robert (the owner) came to my house took measurement, showed us the design in 3D and gave us pricing on the same visit. his work is very professional and his team did a great job, I would absolutely recommend to hire them for any closet work. He and his team did an amazing work and I am very satisfied with pricing and work done

I had used Euro Closet Design in the past on 2 seperate houses. (One house was over 6000sf) I called them to design just one closet and had the feeling they did not want to take on such a small job. After receiving such a high quote I deceided to shop around. I called Premier Closets and they called me back immediately and came out within a few days and installed the same closet for $500 less. I will definately be using them again!

Description of Work
Closet for my son's room

Perfect! They installed the closet in one day. It looks beautiful.

Description of Work
We had a wonderful new master bedroom closet installed. They did a great job. I feel so organized now.

The installers arrived timely. Installed the cabinets as designed.

Description of Work
Creating a work space and storage in utility room. This included counter top desk with cabinets above and below. Cabinets over washer/dryer area, and pantry cabinets.

Premiere Closets did a great job installing our closet organizing systems . The two gentlemen who installed the systems were very professional, they took pride in doing a great job. The system is well make and looks wonderful.

Description of Work
They built some cabinets.

The workmen ( Justin & David) got here on time, were very friendly, professional & quickly got to work. We are very happy with our new closet systems & would definitely recommend this company, we had a great overall experience from start to finish- a big thank you to this company!!! Great job!!!

Fantastic! Robert came to our house and showed us all the options and gave us some great recommendations for our closet. We wanted to maximize space and keep it simple. On install day the 3 professional installers arrived on time and did the work very well. After the install I wanted them to install shelves in one are of the closet I elected to not fit. I was wrong and Robert finished this addition and provided me with a few extra shelves that I asked for all at a very minimal charge. Angie's list reviews is what led me to Premiere closets and I think they were spot on. Superior job for a good price.

Description of Work
5 closets: His and hers walk-in and 3 smaller kids closets.

There was a couple of closet companies I looked at.

Description of Work
They put in my closet for me.

Robert provided designs for two small walk in closets which were well thought out and provided everything I was looking for to handle my needs. The installers showed up as scheduled and were professional and respectful during the install process. I would highly recommend Robert and Premier Closets.

They did great work! I would definitely recommend them.

It went exactly as planned. Premier closets provided a plan after the initial meeting. They showed up as planned and on time. The job was done quickly and the guys were great! Will use again in the future for other projects!

They installed a closet and made 5 cabinets. We love both of them. One of the cabinets is in the laundry room and spans the whole back wall above the washer/dryer. It is deep and tall. Fits detergent and anything else you would want to store. This is the 4th time I have used Robert. I will only use him, very happy with everything he has done for me. He is easy to work with and a nice man. The people who did the install were knowledgeable and quick and professional. They do great work. I would give 10 stars if I could. Very happy with them.

Description of Work
Closets and cabinets