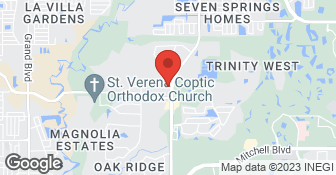 We specialize in insurance estimates and repairs for both residential and commercial properties. We inspect the damage, estimate repairs, and repair the property. We have our own in-house crews, which leads to a greater emphasis on quality control and excellent customer service. All of our employees are drug-free and background tested. All repair work is guaranteed for one year. We are a family-run business, who has been in the construction industry in the state of Florida since the 1920s

The finished product is excellent, but to get there it wasn't. They work three days out of the week and then take four off, something like that. They never came on time, but the end result is good. They never use the same workers all the time, it always change. They are a good company and a class act, but they're all over the place. They use different people for different things, so you never have a consistent person. They fired the head worker. The workers were complaining that they were not getting paid enough. They came in as a class act, and it was going to be a certain way. We got to the end, but they ended up hating me because I hold people up to what they suppossed to do. I lost money on the job because the worker tripped in the garage, and it ripped my leather. I had to send it out to a person that specializes in that type of work. It was just a nightmare for me. It was a bit expensive, but it was hard work. One of their workers stole my drill. They called me. They're also nice too.

Description of Work
When I had water damage they put in a floor, put in a new vanity in the small bathroom, and restored the whole floor.

Description of Work
Repaired an existing back deck.

Did initial estimate after Servepro Detected many damages not included in insurance estimate Worked with insurance to get needed repairs covered. Contracted to replace kitchen cabinets, Bathroom tiles, cabinets bedroom and hall floors ceiling work and paint. Work generally OK and came back to repair and adjust items as detected. Some recent issues covered under warrantee

Residential and Commercial concrete coatings that last a lifetime. Our full flake flooring system covers & protects your concrete surfaces and our product is 20x stronger than epoxy!  …

Trademark Garage Floors has installed more garage floors than any other company in Florida. Only the best materials installed by trained professionals will be installed on your floor. You deserve the absolute best in return for your investment and that is what we deliver. We back our work with a lifetime guaranty on all our polyaspartic residential floors and a 2 year guarantee on all polyaspartic commercial floors. We are endorsed as Spartacote's Elite Installer for the Tampa area, backed by Laticrete.  …

Building Restoration Services, Inc. is currently rated 3.5 overall out of 5.

No, Building Restoration Services, Inc. does not offer a senior discount.