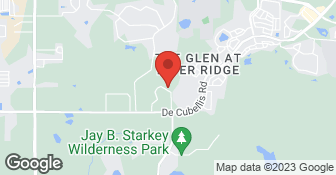 I contacted John. We discussed the process. I had several old and failed individual screen panels that needed to be replaced. The pricing was fair. Shawn arrived right on time and did an excellent job. I was quoted a good price to replace some additional panels. I will definitely use A Aluminum & Rescreening Company Inc again very soon. Thanks!! John and Thanks to Angie !

Work performed well. Santiago and his crew showed up on-time and completed the job as planned.

They came out to provide a free quote, then said they would call before coming out in a day or two to repair. They came out as promised, but I didn't receive a call beforehand.

They did an excellent job. We are very pleased with it. Nathan who was one of the workers who did the top of the pool enclosure and he did an excellent job. When he was finished he checked all the screening and made sure all of it was perfect. We also had new gutters installed around the house and that was also an excellent job. Santiago Avila the owner of the company gave us a great price and it was lower than a previous quote that another company gave us. We recommend this company to anyone who is looking for someone who does a great job and isn't overpriced.

The A Aluminum team went way beyond expectations. In addition to screen replacements, they created a special panel at roof line, replaced screen door with new code requirements and just did an amazing job. Excellent copy, prompt service and quality workmanship !!

Description of Work
Several screens needed to be replaced, 11 in total.

All smooth. Arrived in time and completed project quickly.

Santiago showed up on time with a large crew. Replaced gutters and replaced dry rot in fascia as needed. Reworked cage to accommodate larger gutters. New door hardware. Rescreened entire cage with top quality screen material. Crew worked quickly and efficiently with good humor and no drama. Kept me up to date during work. Work was well done and looks good. Expected work to take 2 to 3 days, done in one. All in all, an excellent experience.

AAluminum and Rescreening Company did a superb job! Santiago is a true professional, dedicated to quality, clean, responsible, very respectful!!! I wish any business does a similar the job. I recommend Santiago and AAluminum Rescreening Co. to anybody that wants the highest quality work at a reasonable price!!!!

Description of Work
Re screening the entire pool enclosure.

This is an update to the review I posted on September 28, 2017. We thought we were done with A Aluminum and Rescreening, but they were not done with us. The night that I spoke to Peter, I stated to him that he had lied to us twice by saying he would do the job that afternoon, and then didn't show up. He was totally unconcerned by what I had to say, so I told him what I thought of him, and he hung up on me. The same night, I also called the office and left a message, stating that we didn't want to do business with them and why, and that we would be posting a negative review on Angie's List. Early the next morning, we were surprised by a loud noise in our backyard. I looked out the window and saw that a man had thrown a ladder over our locked privacy gate and had climbed over the fence. He was wandering around our lanai, and I opened the back door and told him to leave. He never said who he was, he just said, "I have a work order to do this job!" I said, "No, you were scheduled to be here three days ago. You do not have an appointment to be here, and you need to leave." He said, "That's just the way we do business." I said, "That's not the way you are going to do business with me, and you need to get off of my property." He squared off towards me and said, "What are you going to do, throw me out, tough guy?" After the fourth time I told him to leave my property and told him he was trespassing, he climbed back over the fence and went to his truck, which was parked in our front driveway. While he was at the truck, he started screaming about how I had it coming, and I would get what I had coming to me one day real soon. He was screaming so loud, we could hear it inside the house with the door closed. After the man finally left, we promptly called the police and gave them a statement about what had happened. I received a call identified on the caller ID as Wesley H., who apologized and said he should have left my property when he was asked rather than making a scene. I told him that he should have knocked on our door or rang the doorbell rather than climbing over my locked fence. Not only does this company not return calls; they also don't bother communicating with their employees, because it was made clear the night before that A Aluminum was not welcome at my home. Even now, days later, we still have yet to receive any communication from the management or owner of this company as well. If you want a company that doesn't return calls, doesn't keep appointments, shows up days after they are supposed to, whenever they want to, a company that causes you to call the police after being threatened repeatedly just for asking them to leave, then you should call A Aluminum & Rescreening Company.

Tampa native/Brandon resident Josh Haker has been pressure washing Tampa Bay for over eight years. In 2009, he formed Hurricane Clean, Inc., a Florida corporation, serving Hillsborough, Pasco, Pinellas and Manatee counties, and areas in close proximity. Hurricane Clean employees are professional and clean… you don’t have to worry about suspicious characters coming to your home whether or not you’re home when we come to clean. Our workers are licensed and insured employees, not contractors. We provide free estimates, and we visit the property we will be cleaning before we estimate every job. Contact us for your free estimate today, and start enjoying a beautiful clean surrounding for months!  …

Soft wash cleaning process, safe for your home with better results than high pressure cleaning. Roof cleaning and roof rejuvenation specialist allow us clean and restore the beauty of your home. Roof rejuvenation process can extend the life of your roof by 5 years.  …

Brand New Cleaning is your local, veteran owned company where satisfaction is guaranteed at a fair price. We offer a multitude of services including pressure washing, paver sealing, and window cleaning. Reach out today for your free estimate! (727) 514 - 8722  …

How is A Aluminum & Rescreening Company Inc overall rated?

A Aluminum & Rescreening Company Inc is currently rated 4.9 overall out of 5.

What days are A Aluminum & Rescreening Company Inc open?

What payment options does A Aluminum & Rescreening Company Inc provide

No, A Aluminum & Rescreening Company Inc does not offer eco-friendly accreditations.

Does A Aluminum & Rescreening Company Inc offer a senior discount?

No, A Aluminum & Rescreening Company Inc does not offer a senior discount.

Are warranties offered by A Aluminum & Rescreening Company Inc?

What services does A Aluminum & Rescreening Company Inc offer?

Are there any services A Aluminum & Rescreening Company Inc does not offer?