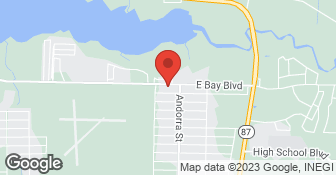 Not sure what to expect when you hire an electrician? How about one that is courteous, drug-free and professional...that's what Always On Time Electric will provide for you. Only a background checked, clean-cut and drug-free licensed professional will come to your home. Over the last 20 years I have worked in thousands of homes just like yours. I have learned the right and wrong ways of the service industry and my promise to you is that I won't take the easy way out. I will have the fortitude to finish the job right, the first time. If there ever is a problem I will quickly respond with your best intentions as my priority. If I leave a mess, use tobacco or swear while at your home, the service is free! I look forward to meeting you and please call anytime. 850-736-6111. Thanks, Scott Sutherland....

I had a number of circuits go out at my house. The refrigerator was on one of the circuits. Always on Time was prompt and they did an excellent job. I am very satisfied with their service.

They were late, about 4 hours late. Fairly certain the cost of the work was made up on the spot. The younger journeyman seemed honest and knowledgeable.

We apologize for being late and try our best not to let that happen. Me and my wife went out of country to visit her family and there were some things that were not handled correctly in my absence so again, I apologize. I have corrected that problem as well as the older guy that made up a price. We have a very good price guide that I made so there is no excuse.
5.0

The electrician was on time and prepared to work. He replaced the lights and hauled away the old lights and boxes. He was courteous and friendly. Very happy with the quality of the work done and the customer service.

Thank you [Member Name Removed], we appreciate your feedback! Thank you for taking the time. If you ever need anything again please let us know. Scott
4.0

We were scheduled for Monday afternoon, but due to a cancellation, were moved up to Monday morning. We received a call and agreed to the earlier time no problem. Two technicians arrived, were polite, professional and represented their company well. We expected a $49 service fee. That was explained when the appointment was originally made. One tech changed the circuit breaker on an outside breaker box and was finished with the job (well done) before the other one could finish writing the ticket. The total bill was $213. Minus the "service" fee that's $164 for less than 10 minutes worth of work. No idea what the parts cost because the bill was not itemized, but breakers of the same size run about $10 at Lowes. Seems a bit on the high side considering how quickly the job was completed. Again, absolutely satisfied with the work performed.

Excellent experience. Got an appointment a week away, but told them to keep me in mind if they had an earlier opening. Lucky me. They called a day later and asked if I was available to fill a cancellation. The uniformed, professional electrician was at my place in 30 minutes, gave a reasonable price, and got to work. The results were first-class. This company will be my first choice for future electrical work.

Great. Showed up on time and got right to work. Downlight was easy to easy to install and works well. The shower light had to be installed in the existing ceiling and wired to a new switch. One of the team got in the attic while the other worked to catch the wire from above. New hole cut in ceiling and new LED fixture installed. Both feature dimmers to control brightness.

They didn't meet their original time window to come to my house. They also don’t give free estimates. When the guys did arrive they were very friendly and professional. Their work was well done and neat. Given that my breaker box was in the garage the wire run in the garage was pretty straightforward I thought the work was over priced for the effort required. I was use them again for their work but would likely get additional estimates to try and save money.

The crew arrived early got right to work and cleaned up after work was completed. The crew wears slip-on terry cloth covers over their shoe to prevent tracking in dust and debris. Their name says it all!

The owner and crew were awesome. On time, polite and professional--Friendly and neat. We would recommend them and certainly call them again. Thank you, guys!

Description of Work
Had electric connected to our storage shed.

Great. Quickly diagnosed it and had all the supplies on hand necessary to repair it immediately.

Ramos Construction, is committed to excellence every aspect of our business. We uphold a standard of integrity bound by fairness, honesty, and personal responsibility. Our distinction is the quality of service we bring to our customers. Accurate knowledge of our trade combined with ability is what makes us true professionals. Above all, we are watchful of our customers' interests and make their concerns the basis of our business.  …

In business since 2002, Titan Sunrooms is the leading sunroom manufacturer in NW Florida. Our factory direct model cuts out the middleman and provides our clients with a vastly superior product at competitive pricing. Manufactured in Florida and built to handle the severe Florida weather, Titan gives our clients long term security by offering a 40 year warranty on our sunrooms, screen rooms, patio covers, pergolas, car ports and proprietary line of Blockhouse Sheds.  …

We are a full service electrical contracting company doing small to large jobs both residential and commercial. We specialize in electrical service work. We have 25 top notched employees to assist you in your needs. We operate out of fully stocked dispatched service vans. Our management staff has over 100 years of electrical experience. We are fully licensed and insured. We have won the AngiesList Super Service Award every year from 2013 to date because of our high level of customer service and excellent pricing. We were awarded the Northwest Florida Better Business Bureau TORCH AWARD which was created to publicly recognize businesses that insist on exceptionally high standards of ethics in dealing with customers. We have been awarded "Finest On The Emerald Coast" by area customers every year for 2012 to 2021, and voted as "Best in Destin" in providing electrical service. We are a BBB accredited business, and earned the BBB Torch Award for Business Ethics. We offer 24 hour emergency service 365 days a year, and when you call our office at anytime you speak to a real person. We appreciate the opportunity to earn your business. Thank You!  …

How is Always On Time Electric Inc overall rated?

Always On Time Electric Inc is currently rated 4.9 overall out of 5.

What days are Always On Time Electric Inc open?

What payment options does Always On Time Electric Inc provide

No, Always On Time Electric Inc does not offer free project estimates.

No, Always On Time Electric Inc does not offer eco-friendly accreditations.

Are warranties offered by Always On Time Electric Inc?

What services does Always On Time Electric Inc offer?

Are there any services Always On Time Electric Inc does not offer?