Serving Miami and the Surrounding Area 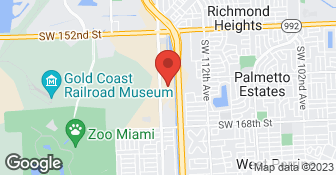 Handy is an Angie's List national platform partner. With Handy, you can book a transparent, fixed price home service with an independent professional any day from 7 am to 11 pm. Professionals booked through Handy are experts across a range of home services, including home cleaning, handyman services, painting, lawn care, and more. They have collectively performed over 3 million projects across 250 locations. Handy, through the Handy platform, offers technology and information to book home services, but does not itself provide these services. The provision of services is the responsibility of independent professionals scheduled through the Handy platform. Tasks booked and paid for directly through the Handy platform are performed by background checked professionals*, and are backed by the Handy Happiness Guarantee**. Notes: * Handy screens handyman and cleaning professionals that you book and pay for directly through the Handy platform. This process involves: a) Pre-screenings – Potential Professionals must provide detailed personal information, and validate their home service experience. b) Credential Verification – Handy partners with Jumio to use computer vision technology to verify the identification credentials of potential professionals. c) Background Check – The background check screening is performed by Checkr, an accredited third-party background check provider. Checkr's search includes national, state, and county databases stretching back at least 7 years, and longer in certain jurisdictions. The purpose of these checks is to identify offenses that may disqualify potential professionals from using Handy. You can learn more about Handy's screening and background check process at www.handy.com/trust-and-safety ** Handy backs all bookings made through its platform with the Handy Happiness Guarantee. Handy strives to match you with the right pro for you and your home every time. If you're not satisfied with the quality of the service you booked and paid for directly on the Handy platform, Handy will send another pro at no extra charge for your next booking. Additionally, In the rare event of damage, Handy's got your back. Bookings made and paid for directly on the Handy platform are insured. You can learn more about Handy's screening and background check process at www.handy.com/handy-guarantee...

It was good the house was clean, the cleaner did very well

Description of Work
They clean the house

Description of Work
SCAM ALERT: you call this company and they ask for your info including payment info to sign you up for a different app named HANDY. They make you a profile, and take you off this platform. Once I paid the provider never showed up and now I’m fighting to get my money back and my house was never cleaned. They should be reported to BBB.org

No one came, so I didn't get anything done.

Description of Work
No one came

Horrible, I hired Handy House Cleaning to clean my 5 bedroom house for a Saturday morning. First the person arrived late, once she got there within the first two hours after her husband came to my house and dropped her off, she called her husband who was getting arrested with his children in the car for stealing at a near by home depot. We had to take her to go pick her children from the home depot before the police took her children. She advised and promised us that she would be back Monday morning as no work was completed in my house which I paid in full for. After this occurred I have tried everything to speak to someone directly about this because this is beyond unacceptable and I don't get an answer. I don't know if there is anything missing in my house as I really haven't check but there was no background done on this young lady because shortly after i got a phone call from DCF regarding this woman having an open case due to her drug addict husband. I do not understand how they would allow someone like this to come to my house where i have my four kids in, i am furious.

Awful she was immature never cleaned microwave, above refrigerator if my husband wasn’t there & told her to clean behind couch she would not have She used my vacuum & the smallest mop & bucket never emptied out water worst job ever! I tried to get at least a partial refund I was sent an email $20 off next cleaning are they kidding this co should not be on your list I was given wrong info when I made appointment & they sure wanted the credit card up front first & last time Maureen Kaplan

Scheduling Handy House Cleaning was difficult. We called and discussed with a representative but ended up having to schedule on line and did not get the discount that were promised, most likely because the representative was not aware of the restrictions. Once it was scheduled and paid for, Handy House Cleaning rescheduled the first appointment and we could not get a hold of anyone to discuss the changes. The company rescheduled for two days later and they never showed up. After finally getting a hold of them we were able to reschedule for Wednesday (5 days past the original appointment). When they finally showed, the cleaning job was average (ex. dirt left on floor next to side of toilet). The company offered discounts on future cleaning but we will not be using.

Description of Work
Move in cleaning

Great! The young lady was punctual! She was thorough and did a great job! I will have her back!

Terrible cleaning job! Will never recommend them! Forgot patio doors, bathroom floor had hair on it, toilet bottom was never cleaned! All I wanted was them to come back to finish the job correctly and they will only give me a discount on my next service!! Never again!!

Went great. I guess they have had new management take over in last few months or something because they have really really improved their customer service. They alert you a day before they charge your card (which they didn’t before) and they are very quick to respond to any issues. I had a person not show up and they found a very good replacement within a couple of hours for the next day. Have been very pleased with them of late!!