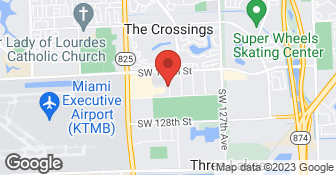 Falcon Plumbing quickly became a preeminent part of the Miami community since it opened its doors in 1986. Women owned and operated, with over 31 years of experience, you are guaranteed exceptional service 24 hours a day. Our technicians are licensed and trained, capable to diagnose and repair any issue your home or business may have. We vow to exceed your expectations in a prompt, cost effective manner. Call us now to set up an appointment today!...

I called Falcon Plumbing after receiving a very high water bill. They charged me $285 to go into crawl space to check for the leak. Did not find the leak and left with my $285. I feel so taken advantage of.

Description of Work
High water bill due to leak

Every repair has been done perfectly the first time. Repairs & replacements have lasted for years.

Description of Work
I've been a customer for over 25 years and in all those years the owner, Wendy, has given me great advice on solving all my problems & the plumbers she hires are truly outstanding in their knowledge of how to repair or replace all my complex plumbing issues. I have a house built in 1954 that is on well water with a septic tank so the problems are complicated & difficult to solve, but never once in 25 years have I been disappointed!! That's an amazing track record for any company. The men clean up after themselves, are courteous & very professional. The price is always very reasonable. Wendy has repeatedly researched for parts of my older fixtures to save me money. This company deserves more than 5 stars.

My text message to Falcon - Wendy - Thank you for your quick response this morning. I want to once again complement Michael for his outstanding professionalism and great work. He knows what he is doing, explains it clearly and does it throughly. He is a credit to Falcon and I will go online to say that to the community. Richard

Description of Work
Replacement of kitchen faucet and water line to dishwasher.

GREAT SERVICE! Called on 12/26/19 for my stopped up kitchen sink. Person answering phone was SO nice. Justin, the plumber, arrived on time and was really pleasant and completely competent. Justin told me the price ahead of time. I would HIGHLY RECOMMEND their service.

Very happy with the service. The owner answered the phone and was able to send someone out the next day at a time of our choosing. Michael was very knowledgeable and diagnosed the problem with the main water shut off and repair it; and replace the toilet the cut-off valve. He adjusted the toilet fill valve so it did not need replacing. I will hire them again.

Plumber came on time but broke the toilet handle and after he turned off the water the water shutoff in the bathroom started leaking. Agreed to pay to fix it and he promised to return that day with a new toilet handle. Did not show up and I had to call to find out when he was coming. Promised the next morning - no show. Finally came back replaced the toilet handle and worked on the shut off valve. However, right after he left it started leaking again. Cost - $411

Description of Work
Replace two toilet fill valves just to get ready for the holidays.

As usual, the Falcon plumber arrived on time, was professional, informative and did a great job at a very reasonable price.

I have used Falcon Plumbing on several occasions for different plumbing issues. They are very reliable and punctual.

We called and were given an appointment 2 days later from 3:00-5:00 pm. When no plumber arrived by 5:00 we called them. The lady who answered was curt and said plumber was on another job and had another call to go to before us. When I asked why no one notified us of a delay she became indignant and said that’s why we shouldn’t book appointments that late in the day-which is time THEY gave us! Poor customer service. We cancelled them.

Description of Work
Water kept running after toilet flushed We had to turn off water after using toilet.

I am sorry things did not work out. If waiting two days for an appointment did not work for you, you should have not made an appointment. We give priority to leaks, stoppages, and customers with no water first, because they are emergencies. Sometimes Falcon Plumbing tries to help all our customers, and we get overbooked. We give a two hour timeframe, but always tell the customer we will give them a half hour or hours notice. The technicians sometimes run early or get stuck on a job. I do not like people sitting and waiting. Again, I am sorry it did not work out.
5.0

Attempted to replace the inline filter for the fridge, and after running the water to through the sink as it is instructed, the valve could not be shut down, knowing that the stopper I the valve is possibly worn out, I tried to replace the valve, but due to the age of the valve, I couldn't take it apart, and whatever I did it made the situation worse. I locate a few Plumbers on Angie's List, first one I contacted was not available until next day morning. The second one did not answer, it was on a Saturday and I was pressing my luck to get it done today. When I call Falcon Plumbing gave the specific of my situation, and the contact person said that she will call me back; when she called me back, I was pleasently surprise that they can get a plumber name Ralph to come over in about in a few hours after he was done with current plumbing repairs. Ralph called and he came over, saw what needed to be done and got the job done in no time. At the end, it was relief that the valve was replaced and the water to the house was restored with no major leaks.

With over 15 years of experience, TD Plumbing is dedicated to providing our customers with the best quality and craftsmanship available.We are here to build relationships with each customer and our communities as well as providing our employees with a great place to work. We look forward to working with you!  …

Barrett's Plumbing & Septic is a family owned septic tank and drain cleaning company. Our staff consist of excellent plumber's who have over 20 years experience in the field, consistently demonstrating genuine care about each customer's individual need. Our company specializes in Septic Cleaning, Greasetrap Cleaning, Storm Drain Cleaning, Sewer Hookup, Drainfield Installation, and Camera Inspection. It matters not where the problem is we are committed in making the process stress free and easy as possible for you. We operate 24hrs and emergency services..just give us a call and leave the rest to us.  …

How is Falcon Plumbing overall rated?

Falcon Plumbing is currently rated 4.5 overall out of 5.

What days are Falcon Plumbing open?

No, Falcon Plumbing does not offer free project estimates.

No, Falcon Plumbing does not offer eco-friendly accreditations.

No, Falcon Plumbing does not offer a senior discount.

Are warranties offered by Falcon Plumbing?

What services does Falcon Plumbing offer?